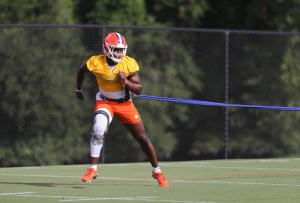 Could Adam Randall make his debut for Clemson as early as next week when the Tigers host Louisiana Tech?

“I hope so, but we’ll see what the trainers say,” Clemson coach Dabo Swinney said.

Randall, who’s been on the fast track to a return seemingly since undergoing surgery to repair his torn ACL during the spring, took another step forward in his recovery Saturday. The freshman receiver dressed out and, with a brace on his right knee, went through pregame warmups ahead of the Tigers’ win over Furman at Memorial Stadium, though he didn’t play. But whether it’s next week or Clemson’s ACC opener at Wake Forest two weeks from now, Randall isn’t far off.

Swinney said following Saturday’s game that Randall has been a full practice participant for the last two and a half weeks and that he likely could’ve played Saturday if not in Clemson’s Labor Day opener against Georgia Tech.

“He’s done everything,” Swinney said. “He’s been on the scout team. That’s why they wanted him to come out and do all the pregame tonight. He’s been on the ground (tackled). He’s done it all.”

Swinney said Clemson’s medical staff is trying to get Randall and his surgically repaired knee used to the physical demands of the sport again before giving him the all clear.

“He’s out there playing football at practice every day, but I think they’re just really trying to be cautious with him and just get him a good couple of weeks of being tackled if you will,” Swinney said. “Falling down and doing all these things. He’s close.”

Swinney said he should get more input from doctors and trainers in the next couple of days as to whether or not this is the week Randall is ready to return to game action.

“He’ll play when they say he’s ready, but he’s running around and looks good out there.” Swinney said.