Shares of PayPal Holdings (PYPL -6.27%) were down 6% as of 1:19 p.m. ET on Monday after a backlash over a new policy update. For context, the S&P 500 index was also down more than 1% earlier this afternoon before rallying.

Apparently, PayPal had issued a policy change that would fine users $2,500 for spreading “misinformation.” The company issued a correction that it is not fining users for misinformation and never intended to do so.

The negative publicity comes as PayPal is struggling to regain its mojo after reporting slowing growth over the last year. The stock has fallen 55% year to date. The question remains if this episode will have any lasting impact on the brand.

This might seem like a trivial episode, but sometimes it can be difficult to tell what kind of impact negative publicity can have on a brand. But the stock sell-off today seems to reflect the broader market performance than anything company specific. As the broader market started to rally in the early afternoon, PayPal was following suit. 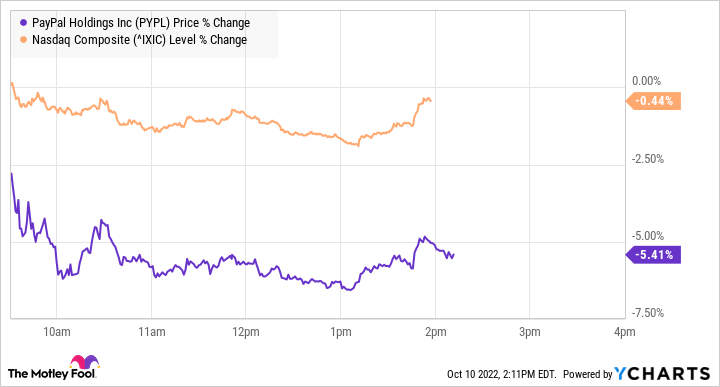 PayPal shares have fallen much harder than the Nasdaq Composite‘s 33% decline year to date. Today’s move is consistent with the stock’s typical wild swings relative to the market volatility, so it’s difficult to determine how much of today’s move is being driven by the policy update reaction.

PayPal is such a widely used service that this probably won’t damage its brand. PayPal finished the second quarter with 429 million active customer accounts, up from just 181 million in 2015. It’s grown a lot and become an essential payment app for millions of people around the world. Plus, the company did well to respond quickly to kill the misperception by issuing a correction before it snowballed out of control.

Still, this episode might place even more importance on the company’s upcoming earnings report and guidance for the next quarter. Analysts currently expect PayPal to report revenue of $27.8 billion for the full year, representing growth of 9.7% over 2021.