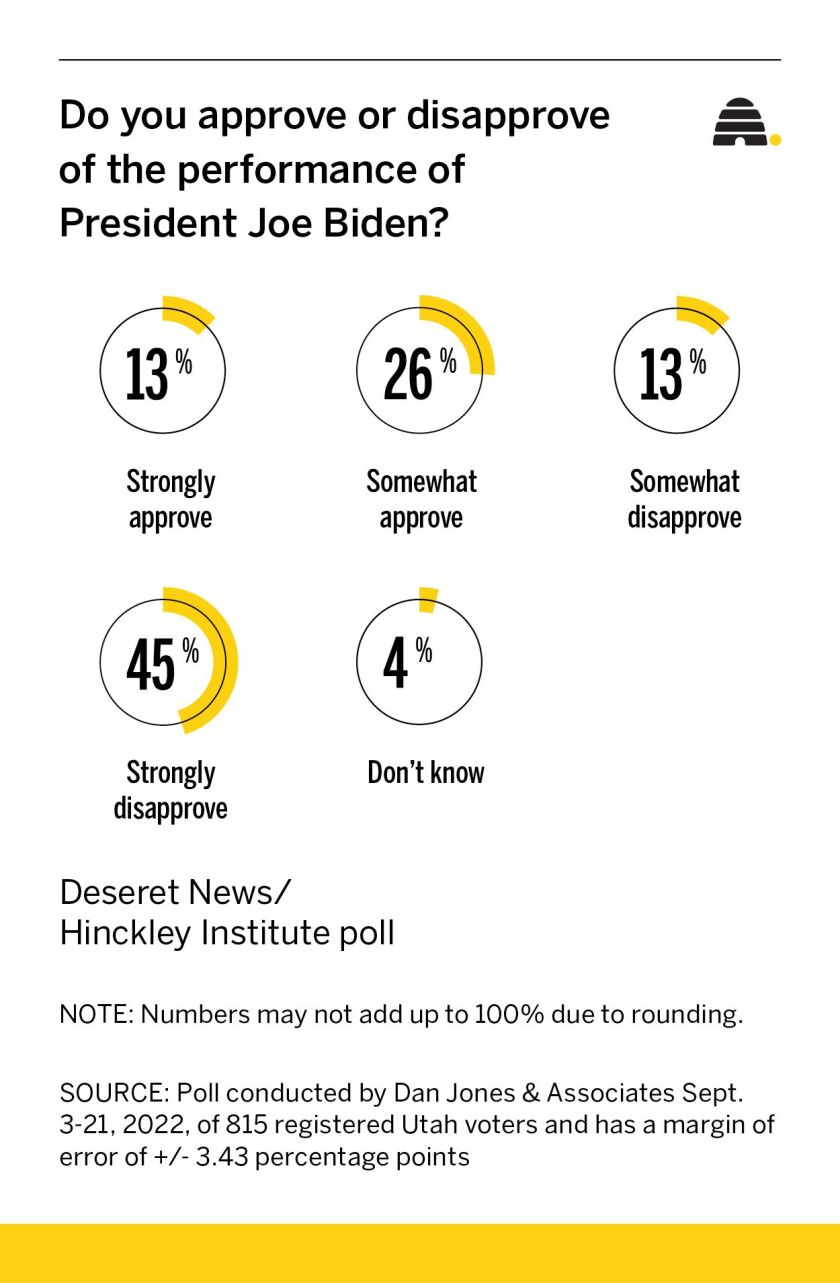 
Utahns rate President Joe Biden’s response to the COVID-19 pandemic as so-so, his performance overall as president not so good and his handling of the economy even worse, a new Deseret News/Hinckley Institute of Politics poll found.

Though Biden fared a little better in the latest survey, only 39% of Beehive State residents approve of the job he is doing in the White House and 58% disapprove, including 45% strongly.

Nearly 9 in 10 Democrats approve of the president’s performance, while three-fourths of Republicans disapprove, according to the poll.

Dan Jones & Associates conducted the survey of 815 registered Utah voters from Sept. 3-21. It has a margin of error of plus or minus 3.43 percentage points.

The president’s approval rating is only slightly higher nationally than it is in Utah.

As of Friday, Biden had a 42.7% approval rating and 52.7% disapproval nationally, according to FiveThirtyEight’s polling average.

The president’s rating in Utah has hovered in the low- to mid-30s since dipping to 29% in February following a difficult first year in office marked by Russia invading Ukraine, record-high inflation and sharp political division.

None of that has changed, but Biden has scored some wins in the past couple of months, culminating with the Inflation Reduction Act, which aims to address taxes, health care spending and climate change.

While that law isn’t popular in Utah — the state’s all-Republican congressional delegation voted against it — the legislation gives Democrats something to run on in the fast-approaching midterm election.

But with a slew of bad money news in the past week — gas prices ticked up after months of decline, groceries aren’t getting cheaper as inflation continues, home prices are falling and the stock market had one of its worst weeks of the year — Biden continues to carry the brunt of the blame.

Utahns gave him low marks for his handling of the economy. The poll found 36% of respondents approve of his job performance in that area and 61% disapprove, including 51% strongly.

A Deseret News/Hinckley Institute poll in July found the economy was the most important issue in determining how they vote in presidential and congressional elections. Mountain West states, including Utah, saw the highest regional inflation in the country in August, coming in at 9.6%

But 47% of residents earning between $100,000 and $150,000 approve of the president’s handling of the economy, the poll shows. And more than half of those in that income range approve of the job he is doing in Washington overall.

Utahns scored the president higher for his handling of the COVID-19 pandemic, which he declared over during a “60 Minutes” interview at the Detroit Auto Show televised Sunday.

“The pandemic is over. We still have a problem with COVID. We’re still doing a lot of work on it, but the pandemic is over,” Biden said. “If you notice, no one is wearing masks. Everybody seems to be in pretty good shape. So I think it’s changing and I think this is a perfect example of it.”

While the remark came amid the poll being conducted, it is unclear if it had any impact on respondents’ answers.

The survey found 47% of Utahns approve of Biden’s response to the coronavirus, while 50% disapprove.

After the president’s controversial remarks, top Biden administration officials stressed that COVID-19 continues to be a threat and health experts said it isn’t going away.

Global Public Opinion of China During the Xi Era