Home Lifestyle Weird Weirdest school mascots: How did these Utah high schools get their mascot... 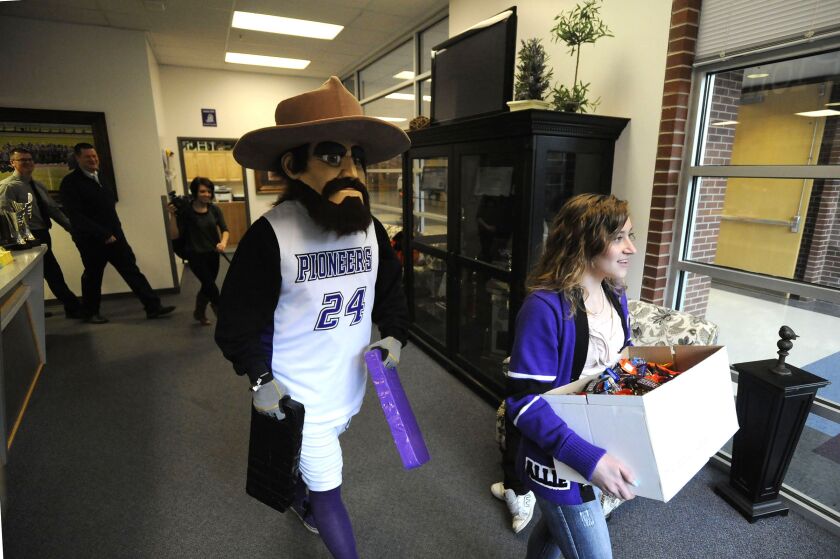 
Have you ever wondered why your high school chose its mascot? From beetdiggers to pioneers, Utah has some unique mascots, but not a lot of people know the stories behind them.

It turns out that a little digging into local history can reveal the interesting, and sometimes humorous, stories of these Utah high schools.

Below is a list of some of the most unique high school mascots around Utah and how they got their names.

The burly Neanderthal that represents American Fork High School was apparently chosen because of the nearby Timpanogos Cave in American Fork Canyon, according to MascotDB. The popular cave has attracted visitors ever since Martin Hansen discovered it in 1887. The high school was founded 15 years later in 1902, and it pulled from the popularity of the nearby cave when it chose the cavemen as its mascot.

The “Friendly Fighting Scots” may seem like a strange name for a school mascot, but it was actually named after the early Scottish settlers of the area. The settlers named Ben Lomond Peak in the Wasatch Mountains after a mountain of the same name in Scotland. When the school was founded in 1952 under the same name, the “local cultural influence gave the school its theme, including bagpipers, Royal Stewart tartan and Scots,” according to the school website.

Carbon High School’s bright blue Tyrannosaurus rex was chosen because of the many dinosaur fossils found in the area near the school. Carbon County is known for its dinosaur fossils and the Prehistoric Museum in Price. The mascot was the Dinosaurs before being shortened to the Dinos.

Ps: My high school mascot was the “Davis Dart.” (They attempted a “Dartman” superhero rebrand shortly before I graduated in 1994. Why, right?) pic.twitter.com/r6ujALz4In

The name of Davis High’s mascot originates from a legend about a running back who was so fast that people said he would dart across the football field, according to the Daily Herald. The mascot used to look like a cartoon figure with a spike coming out of its head, but, according to Davis High News, vandals broke into the cheer room and destroyed the costume, leading to a newer version of the mascot: a gladiator named named Dartman.

A rabbit might not be the most intimidating mascot, but it has led to a unique world record. The mascot inspired the city of Delta to host a bunny hop to celebrate the 100th year of the city, according to KSL. On July 4, 2007, 3,841 Delta residents wore bunny ears and hopped in a line to the song “The Bunny Hop,” setting the Guinness World Record for the longest bunny hop.

There are differing accounts on how Dixie High School got its nickname, but all of them involve someone watching the basketball team in 1928 and commenting on how they seemed to fly across the court, according to The Spectrum. Ever since that comment, the school has been represented by a WWI-era pilot with the logo featuring a biplane. The current version of the mascot was created in 1994 and goes by the name Freddy the Flyer.

When Jordan High School was founded in 1907, the sugar beet industry was a large part of the local people’s lives, leading to the mascot name Beetdiggers. Farmers harvested sugar beets to be processed in the large factory located in West Jordan. Every fall, the students would have a two-week break to help in the harvest, according to the Deseret News.

Lehi High School went through a few mascots before landing on its current one — Pioneer Pete. When the school was founded in 1908, the original mascot was a wolverine, but, according to the school website, “newspaper reporters in Salt Lake City felt a wolverine was too ferocious and violent to be a high school mascot.” They became the pelicans in 1912, but the students were apparently dissatisfied with the mascot and in 1934 voted to change to the Pioneers, symbolizing the pioneer heritage of the city, which was founded by Latter-day Saint pioneers in 1850.

For more than 30 years, Rich High School’s mascot was the Rebels and was represented by a Confederate soldier in a gray uniform, according to the Deseret News. Some believe the choice of the Confederate mascot came from the television series “The Dukes of Hazzard,” which featured the General Lee, a car with a confederate flag on its roof, according to The Salt Lake Tribune. In 2017, the school decided to change the mascot due to its controversial nature. Two students came up with the idea to keep the Rebel mascot, turn it blue and rebrand it as a Revolutionary War Rebel.

The Red Devils mascot was named after the construction company that built the school building — Red Devil Cement Company, according to ABC News. Some parents in the past have tried to petition the school to change the name because they believed it encouraged Satanism, but the name has stuck.

‘It’s weird to watch with a beer not a coffee’: How the world watched the Worlds

The Oath Keepers Are Going on Trial for Jan. 6. Here’s What You Need to Know.

Doctor’s Tip: Processed food is making Americans fat and sick and is killing us