Ukrainian Finance Minister Serhiy Marchenko warned on Tuesday (25 October) of macroeconomic problems of monetary financing as the Ukrainian government has resorted to printing money to finance its defence and other state expenditure.

“Our biggest funder is the National Bank of Ukraine,” Marchenko told experts and diplomats gathered in Berlin for the Ukraine Reconstruction Conference.

The comment was a nod to the relatively low amounts of macrofinancial aid that the EU, the US, and other international backers of Ukraine have provided to the country since it was invaded by Russia.

When the full-scale invasion began in February, Ukrainian tax revenues plummeted, while the defence effort ate away at the financial resources of the government. As a consequence, the National Bank of Ukraine (NBU) had to step in to provide liquidity for the government.

“But let’s be very clear. This is not something you can do for a long time,” she said.

Ukrainian economist and director of the Kyiv School of Economics Tymofiy Mylovanov told EURACTIV that the situation was serious and warned of inflation if monetary financing went on for too long.

This year, Ukrainian inflation is predicted to amount to around 30% and it is expected to remain at such elevated levels for next year as well. The portion of the public budget funded directly by the central bank has decreased since its high point in June, however, some import tariffs have been reinstated and some international budget support has become a little more predictable.

Nevertheless, according to the Ukrainian finance minister, the government is facing $37.9 billion of unfunded fiscal needs for the coming year.

“We have no more room for cuts,” he said.

Economist Guntram Wolff, who heads the German Council on Foreign Relations, agreed that the missing funds should not be financed via further budget cuts, as this would hamper the future growth of Ukraine. Instead, he argued that support for the country should at least partly be funded through joint European borrowing.

Most experts at the Ukrainian reconstruction conference agreed that the budget shortfall had to be covered by outside actors.

“Budget support is not the most attractive thing to do for donors because they want to put their name on something. But it’s the most important thing!” she said.

European Commission President Ursula von der Leyen and German Chancellor Olaf Scholz, also invited to the conference in Berlin, insisted that it was about getting the structure of the support for Ukraine right and that no new financial commitments could be expected from this specific conference.

“Predictability is very important right now,” he said. “We hear a lot of discussions, but we expect disbursements.” 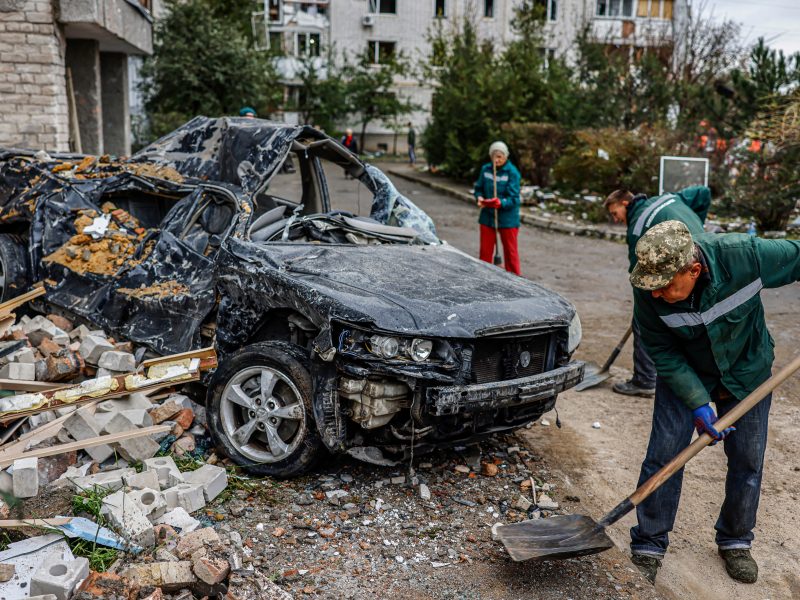 Commission President Ursula von der Leyen and German Chancellor Olaf Scholz called for a Marshall plan ahead of Tuesday’s (25 October) Berlin conference on the reconstruction of Ukraine as the war-torn country struggles with worsening economic conditions and limited financial assistance.