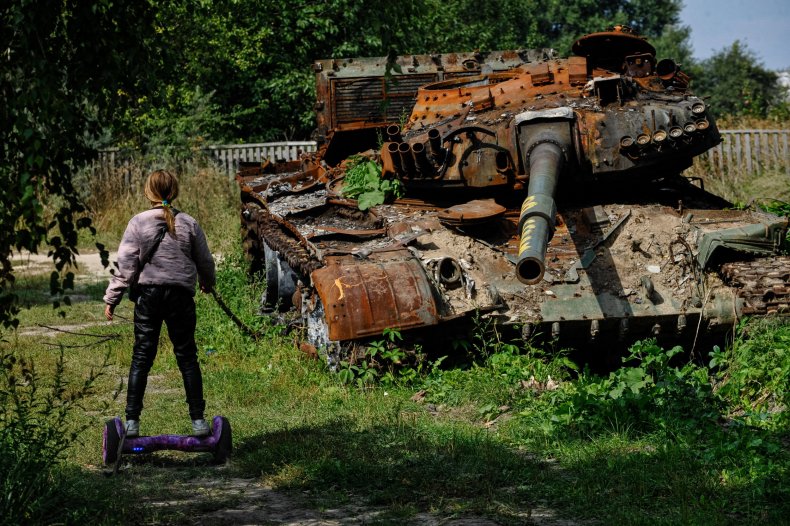 
A senior Pentagon official has said that the war in Ukraine has shown that Russia is not as militarily capable as was believed before Vladimir Putin’s troops invaded.

Undersecretary of Defense for Policy Colin Kahl said that China posed a bigger risk to the U.S. and the world order than Russia did, although he warned that Moscow was still a “dangerous actor.”

Kahl said Russia was “perhaps not as capable, frankly, and conventional as some of us may have assessed six or eight months ago,” referring to the time before Putin launched his full-scale invasion on February 24, after months of building up troops by the border.

Russia has suffered large losses of troops and equipment and failed in its bid to take Kyiv. It now faces a stern counteroffensive from Ukraine in the southern Kherson region and the eastern Kharkiv region in which Kyiv has boasted of making significant gains.

The Air Force Command of the Ukrainian armed force claimed in a Facebook statement on Saturday it had destroyed at least $157.5 million worth of Russian aircraft and weaponry in just three days.

However Kahl said on Wednesday that despite reported setbacks, Russia had also shown that it was “an extraordinarily dangerous and reckless power,” and warned that “a weakened Russia becomes more dangerous on the international stage.”

He referred to how Russia now had to align itself more and seek the help of North Korea and Iran. Russia has reportedly purchased from Iran the Mohajer-6 and Shahed-series drones.

This week, it was also reported that Moscow had resorted to seeking artillery shells and rockets from Pyongyang.

This was because it was shut off from global supply chains due to sanctions, and China, while remaining an ally of Russia, has refrained from providing Moscow with the technology it needs for war equipment.

Kahl said that with its forces busy fighting in Ukraine, Moscow would turn increasingly to unconventional capabilities such as nuclear, cyber and space, as well as misinformation and disinformation campaigns.

“Russia does not pose the challenge to the United States and the rules-based international order over the long term that China does,” Kahl told the Defense News Conference on Wednesday, “but in the immediate term, it’s a very dangerous actor.”

Regarding the threat of China, Kahl also said that Russia’s experience in Ukraine might make Beijing more cautious towards Taiwan.

“I do not think that China wants to put themselves in a position that Russia finds itself in today,” he said, “which is invading a democratic neighbor,” adding that this would “generate an enormous amount of global sympathy.”

Kahl’s views were in line with comments on Thursday by CIA Director Bill Burns who said that the invasion of Ukraine had highlighted the shortcomings of Russia’s military.

Burns told a cybersecurity conference in Washington, D.C, that it was “hard to see the record of the war—Putin’s record—as anything other than a failure so far.”

“Not only has the weakness of the Russian military been exposed, but there’s going to be long-term damage done to the Russian economy and to generations of Russians as a result of this,” he said.

MCRAE: Back to School 2022 | Mississippi Politics and News