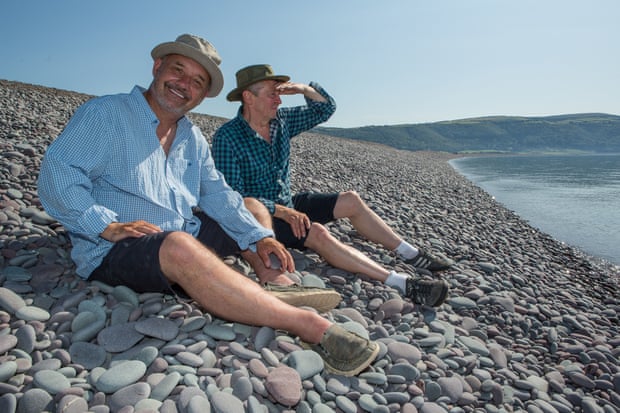 As part of the coverage following the Queen’s death, Jonathan Dimbleby presents this tribute, charting her historic 70-year reign. Through archive, the feature length documentary shows the role that Elizabeth played in all areas of her life, including at home and on the international stage. Hollie Richardson

In his last attempt to find a hobby this season, Alex Brooker invites Andi Oliver to Yorkshire. They show a surprising amount of enthusiasm at York’s National Rail Museum, then head over to the Yorkshire Gliding Club near Thirsk – where Oliver declares: “That was one of the best things I’ve ever done!” HR

The rod squad – Paul Whitehouse and Bob Mortimer – returns for a fifth season. In tonight’s opener, they travel to the River Exe in Devon in search of the grilse, known as the “summer silver”. HR

Celebrities are all very well, but no one calls it like it is better than the sofa savants of Gogglebox’s original, ordinary folk. Series 20 sees the return of favourites such as the Siddiqui family and Lee and Jenny, after Jenny’s hospital stay. Welcome back old friends. Ellen E Jones

Poutine on the glitz: season three of the Canadian RuPaul spin-off reaches its climax, with ice-hockey Olympic gold medallist Sarah Nurse on board as guest judge. The queens are tasked with writing and recording their own verse for a particularly fierce remix of the national anthem. Graeme Virtue

This month marks 50 years since the Palestinian terrorist group Black September killed 12 people at the 1972 Munich Olympic Games. In this multi-language, six-part political thriller, a friendly football match between an Israeli and a German team is planned to commemorate the attack. However, this prompts another threat of terrorism. Mossad agent Oren Simon (Yousef “Joe” Sweid) teams up with no-nonsense German police officer Maria Köehler (Seyneb Saleh) to trace who has been making cyber threats. From the off, tonight’s double bill is packed with tension, mistrust and action – with a bonus pinch of raunch. HR

A new series in which Line of Duty’s Martin Compston and friend Phil MacHugh take a road trip around Scotland, starting with a journey along the west coast: crazy golf and ice-cream in the seaside town of Dunoon, cliff-jumping on the Knoydart peninsula and the “ultimate selfie” in Loch Lomond. Ali Catterall

Cold Mountain (Anthony Minghella, 2003), 8pm, Sky Cinema Greats
Anthony Minghella nailed the kind of epic drama that used to be common Hollywood currency with this 2003 historical romance. Jude Law plays Inman, a Confederate soldier who deserts to return to his true love, Ada (Nicole Kidman), in North Carolina’s Appalachians. A well-off preacher’s daughter, Ada struggles to work her farm alone after her father’s death, until the no-nonsense Ruby (a boisterous, Oscar-winning Renée Zellweger) turns up to set her right. A film of sumptuous landscapes and sweeping emotions, with distinct Homeric overtones. Simon Wardell

Being disillusioned by the power of film and television