At the end of August, I flew with Turkish Airlines from Vilnius to Bodrum via Istanbul. This article will be a review of the connection experience at the new Istanbul airport and the short, one-hour, Boeing 777 service from Istanbul to Bodrum-Milas airport. This article is a continuation from the first flight review, which covered the Turkish Airlines economy class, Boeing 737 MAX 8 experience, from Vilnius (Lithuania) to Istanbul.

I will first go over the experience of connecting at Istanbul airport, so scroll further down to get to the actual flight review. 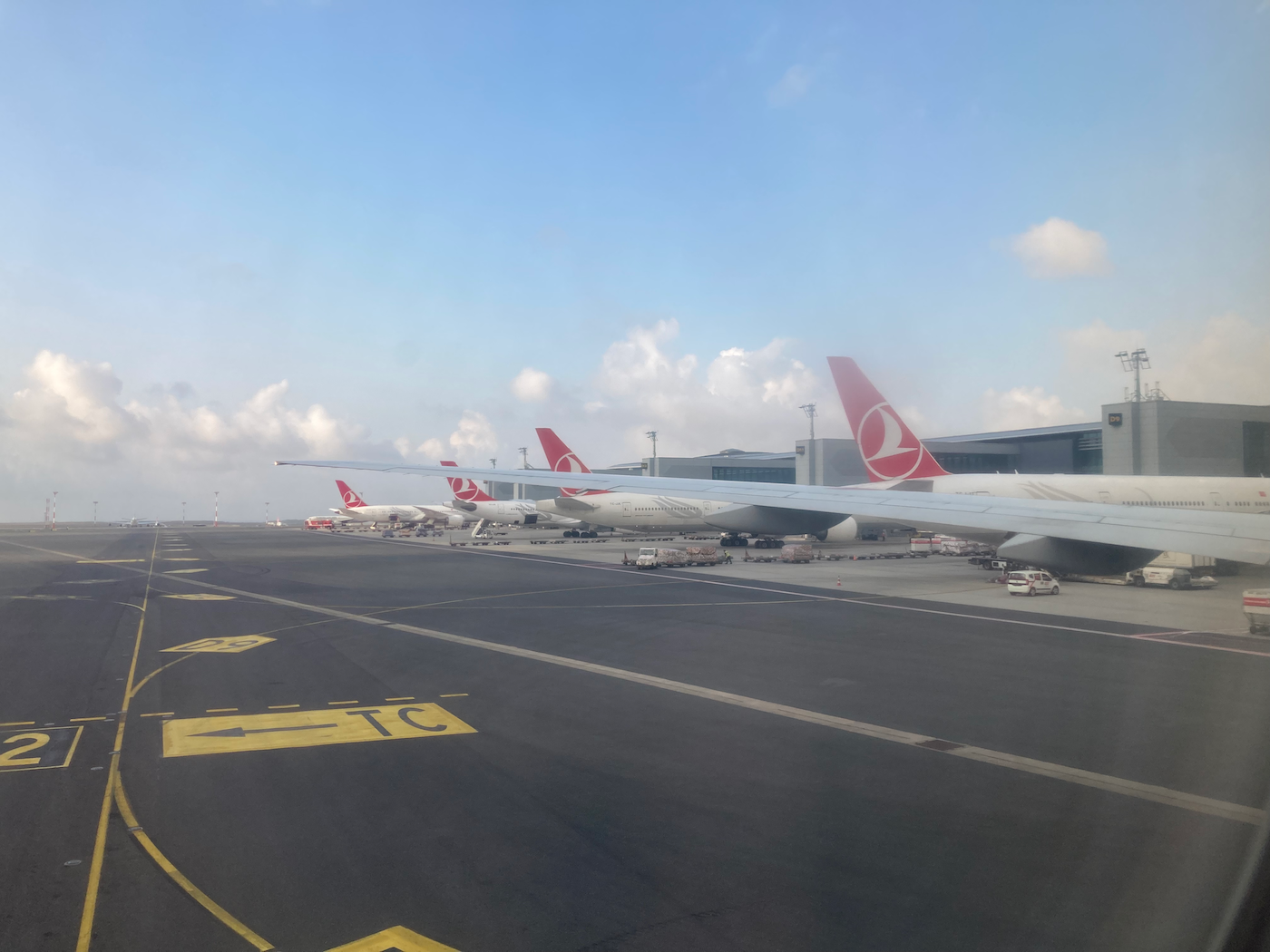 Having traveled to Istanbul twice in the past and experiencing the Istanbul Ataturk airport during those visits, I was excited to see what the new Istanbul airport had to offer. At the same time, I was wondering how (or if) the country was going to improve on the experience at Ataturk, since it appeared to offer a fairly comfortable, and modern experience, even in 2018.

SIMPLEFLYING VIDEO OF THE DAY

Touching down at the airport, our 737 MAX 8 pulled up to the gate, and we offloaded via jetbridge. Entering the terminal at the far end of one of the piers, we were far from the center of the airport and had to walk and take a long series of moving walkways to get to the transit area. Thankfully, at the end of almost every moving walkway, there were clean and spacious restrooms for all those passengers who had been “holding it in,” during their flights.

It felt like it took around 10-15 minutes of walking to get to the transit area. This would certainly have taken much, much longer without the help of those moving walkways. The first step in transiting was passport control, as we were entering Turkey to transfer to a domestic flight. This took no time at all, as there were numerous border guards available with relatively few passengers to compete with. On the way to finding passport control, there were a number of airport assistance personnel along the way, eager to help find (or at least confirm) the location of certain services.

As a Canadian citizen, I had to apply for a tourist visa. This was done in advance online and took very little time albeit at a cost of $60. This allowed me to bypass the visa-on-arrival counters at the airport – which appeared to have some long lines. I had printed this visa out in advance but, despite handing it to the border guard along with my passport, I don’t think it was examined. My guess is that the visa was linked to my passport number which would have shown up in their system.

Getting through passport control and transferring to a domestic flight was easy. Photo: Chris Loh | Simple Flying

After our quick pass-through of passport control, we headed over to a security checkpoint. This felt like a fairly standard experience, with requests to remove liquids and laptops from baggage.

After passport control, we began to look for the gate of our connecting flight. Once this was confirmed, we sat down at one of the numerous cafés scattered throughout this section of the airport. We had considered spending our two hours of wait time at a pay-to-access lounge. However, the reception of the lounge we were considering was taking quite some time to process a passenger, so we decided to just spend time at a café instead. Pricing seemed to be on the higher end, but perhaps quite in line with other major international airports.

Knowing that our short domestic flight from Istanbul to Bodrum would be aboard a Boeing 777, I was definitely expecting to board via jetbridge. However, the gate assigned to our flight was a shuttle bus gate, which was surprising and unexpected to me. Thus, we were taken to a lower section of the terminal, slightly away from the majority of airport shops and services.

While this shuttle-bus gate section was a lot simpler than other parts of the domestic terminal, it seemed to have all the basics. The area around the gate had ample seating and a simple souvenir shop/café along with a set of toilets. There was also a workstation with a number of electrical outlets.

Boarding was initiated slightly late, but the process was carried out quickly, with a series of buses shuttling us across the airport grounds to another side of the terminal. The swift ride across the airport provided a personal glimpse of one of Turkish Airlines’ newly-acquired “Turkoflot” Airbus A350-900s. For those who haven’t yet read up on these jets, they are A350s that were initially ordered by Aeroflot but made undeliverable due to the war and subsequent sanctions. Turkish Airlines had picked these up for its own fleet – but had decided to go with a hybrid livery that had Aeroflot colors with Turkish Airlines lettering. However, once the “tour” of the airport apron was over, we were dropped off in front of air stairs to board a Boeing 777-300ER.

On the left is the “Turkoflot” Turkish Airlines A350-900. Photo: Chris Loh | Simple Flying

With our seats located somewhere around row 50, we boarded via the back doors. The rear section has a series of seats that are clusters of two, making it ideal for couples traveling together. However, seating layout didn’t matter too much on this particular flight as the words “boarding completed” was announced with the plane only about 20 or 30% full. Indeed, looking at the back section of this 777, I could only see two or three other people.

The economy class seat of a Turkish Airlines 777-300ER

I guess I had a subconscious expectation that the cabin of our 777-300 would be fairly modern. Perhaps this misguided expectation stemmed from my previous Boeing 777 experiences with Air France and KLM, which both have refreshed cabins. However, after stepping onboard, it was clear that we were on an older jet. Registered TC-JJP, this aircraft is 11 years old. By the looks of it, I would say that the aircraft hasn’t had a cabin refresh since first being assembled by Boeing in 2011. According to Planespotters.net, the jet once had a three-class configuration but was then converted to just two classes in 2016. The jet is now fitted with 49 seats in business class and 300 seats in economy class.

As might be expected of a widebody, the seats, even in economy class, were spacious and all fitted with an inflight (IFE) system. Each seat also came with a footrest, which was a nice touch – even if I didn’t personally need it. All economy class seats also had a small metal nub that allowed passengers to hang jackets or other articles of clothing. Thus, despite the blue and red cloth seats looking worn down and fairly tired, the cabin was quite comfortable – and certainly more than enough for the one-hour flight to Bodrum.

The content within the IFE systems was robust and diverse and would be the same as the systems found on the MAX. This flight would also include the standard “#HelloTürkiye” and “Pangea” video commercials after take-off – which, as noted in the previous review – simply become an annoyance after viewing the first time. This is especially the case for such a short flight if you have something that you’d like to watch.

Unfortunately, accessing and enjoying this content would not be as smooth as on the newer Boeing 737 MAX 8 that we had previously flown on. Indeed, the systems that were installed in each seatback were quite old. Although these screens were touch-sensitive, the screen sensitivity was severely lacking, and the systems were also just quite slow to respond. To compensate for this, all systems came with remote control. While using these remote controls makes it a little bit easier to navigate systems, it’s certainly nowhere near as fast as using a modern touchscreen. In addition to these minor challenges, the screens were quite dim – even at full brightness. Thus, it was quite difficult to enjoy any kind of inflight entertainment on this flight. Good thing it was only a one-hour service!

One nice feature onboard this aircraft was the pair of external cameras connected to the entertainment system. When the landing gear is down, passengers have a view from the front. While the aircraft is in the air, passengers can watch the view provided by the camera below the aircraft.

The screens were old and had poor display quality. However, the external cameras were a nice touch. Photo: Chris Loh | Simple Flying

Just 20 minutes after take-off, the cabin crew came through the cabin to deliver the inflight meal. Perhaps due to the fact that we were on a fairly short domestic flight, we were only served sandwiches. However, I was quite impressed by the fact that these were hot sandwiches with cheese, tomato, and finely chopped olives. Accompanying the “meal,” was a choice of drinks. In this case, only water, soft drinks, and juice were available.

The sandwich tasted quite good. The cheese was soft and melted nicely into the bread, making it delicious. I probably would have preferred some kind of sauce to go with it but the olives added some nice flavor.

The flight was smooth and quick and provided a beautiful sunset view of Turkey’s coastal and inland landscape. We touched down on time and offloaded via air stairs. Once firmly on the ground, we were then directed to the patiently waiting shuttle buses which delivered us to the terminal.

Arriving off of a domestic flight with no baggage to collect, we quickly and quite easily made our way landside to find transportation to our accommodations.

The flight experience was quite pleasant, even if it was on an older aircraft. I would echo the same sentiment as I had expressed in the Vilnius-Istanbul trip review: Turkish Airlines and its service put North American and European airlines to shame. Even for a one-hour domestic flight, I had access to an inflight entertainment system, along with a hot meal and beverage. None of this required extra payment and was all included with the price of the ticket.

While the seats and their inflight entertainment systems were getting quite old, the flight was still comfortable: The flight attendants were great, and expectations were not only met but were exceeded. At the same time, this older interior may not be as nice for longer flights. Indeed, I can see that this exact aircraft is also deployed internationally – recently completing flights to New York, Tokyo, and Miami. In these circumstances, I might not be so happy having to fly up to 13 hours in this dated cabin and its slower IFE.

Ultimately, I’m certain that the relatively empty cabin went a long way in making the entire experience even more comfortable and pleasant. However, I also feel that it would have been a positive review, even with a full cabin.

Have you ever flown with Turkish Airlines on a domestic flight? Share your experience by leaving a comment.