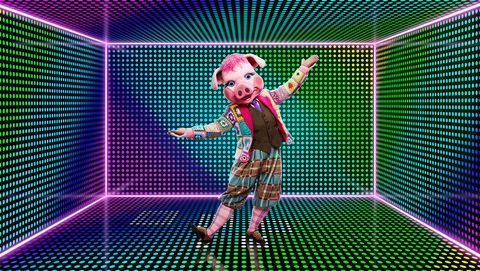 
The Masked Dancer has unmasked its second celebrity tonight (September 10).

After having met the final six characters – Pearly King, Pig, Cactus, Sea Slug, Tomato Sauce, and Onomatopoeia – and watching them strut their stuff, it was time for some decision-making.

The panel, made up of Jonathan Ross, Davina McCall, Oti Mabuse, and Peter Crouch decided that Pearly King and Pig were to be in the bottom two.

Their routines to ‘Going Underground’ by The Jam’ and ‘Walking on Sunshine’ by Katrina and the Waves’ respectively, failed to impress the panel as much as the others, but ultimately, it was Pig who had to go.

After wild guesses including Sandy Torsvik, Anita Rani, Jessica Ennis-Hill, and Frankie Dettori, it was Gavin and Stacey star Joanna Page who was unmasked.

The actress said she had a “fantastic time” doing the show.

“It’s been absolutely amazing,” she told host Joel Dommett. “The children don’t know or anything so they’ll be really excited because this is their favourite programme.”

Related: The Masked Dancer UK unmasks US star as series returns to screens

The actress hinted that she might step away from acting to focus on presenting work, stating: “I [just] really enjoy presenting and it works a lot better with a family as you don’t have to go away for weeks on end. For the first six months after I had Eva, I was away working filming two shows back-to-back.

“I had my mum looking after her on set, but it was so tough as all I wanted to do was spend time with my new baby.

“I love just being myself and chatting to people. It can be a lot more fun than sitting alone in a trailer for hours learning lines, then going out to do a scene where you’re pretending to be ­somebody else.”

The Masked Singer and The Masked Dancer air on ITV.

That Moment When… by Mo Gilligan

It’s Not Me, It’s Them by Joel Dommett

Checking In by Michelle Williams

Close to a Miracle by Heather Small

20 Years: The Greatest Hits by Will Young

My Life by Gloria Hunniford

The Wave by Tom Chaplin

Selena Gomez Calls For Kindness in a TikTok Live

Nonstop Flights From The U.S. To Top Asian Destinations This Fall

Newcastle United have no limit as finance details emerge