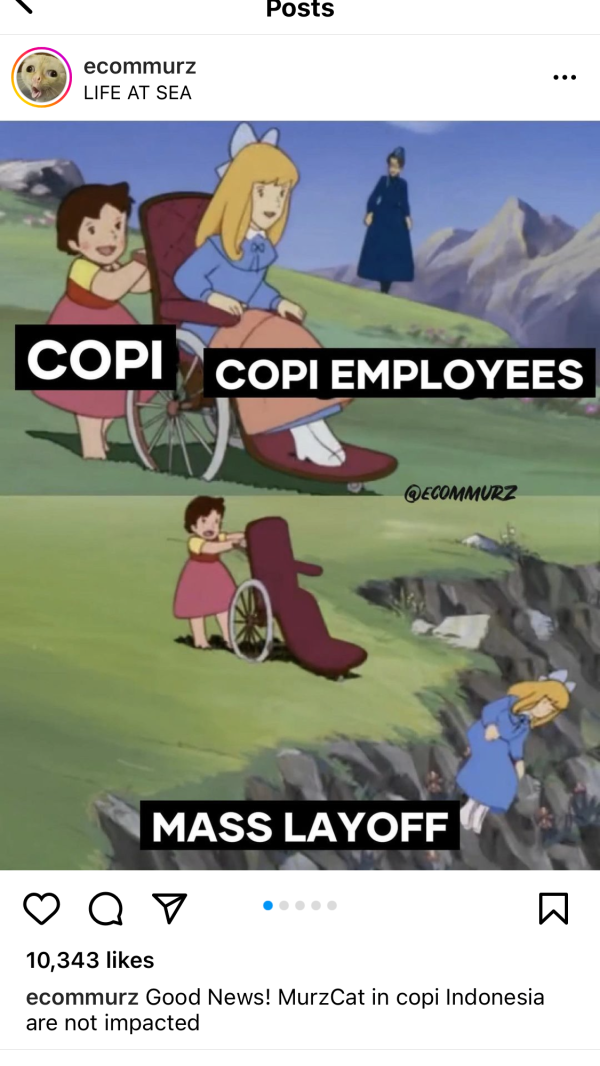 
At the height of Indonesia’s pandemic restrictions in September 2020, an e-commerce startup employee, who would later take the moniker “Elon Murz,” was confined at home. Bored, as the rest of the world seemingly perfected dalgona coffee and played Animal Crossing, Murz — who agreed to participate in this piece under their pseudonym — figured it was time to shake things up a bit.

They reached for the phone and texted their friend group: “Let’s set up a meme account, just for fun. Anyone else want to join?” To their surprise, their friends agreed  — and Indonesia’s infamous “tech whisperer” Instagram account, Ecommurz, was born.

Two years and around 168,000 followers later, hordes of the country’s tech workers now turn to Ecommurz, not just for entertainment, but also for confidential tipoffs, blunt analysis, and, at times, to rally for action.

It’s an indispensable source for anyone watching the fast-changing Indonesian tech scene — especially now, when a funding crunch could fuel more layoffs and abrupt reorganizations at any time. Followers include everyone from company founders to C-suite executives: Kevin Aluwi, a co-founder of Gojek; Achmad Alkatiri, founder of Hypefast; Alamanda Shantika Santoso, founder of Binar Academy; and Pandu Sjahrir, who holds executive and board positions at a number of tech giants, among many others.

In a rare interview, conducted live over Google Docs to maintain their anonymity, Murz spoke to Rest of World about the account’s accidental fame, and its growing role amid the confusion of a worldwide tech rout.

“This [page] opens up [the] story behind the tech industry to the general public. Most of the time they only see content from ‘Life At [XYZ]’ accounts,” said Murz, referring to the idealized, glamorous accounts of self-styled Jakarta tech hotshots. “Now they know the other side as well.”

The account initially gained traction by posting memes targeted at the tech-worker experience: working late to chase impossible targets, or toiling while sick or on vacation. Over time, the account evolved to host more serious content: exposing poor work practices, scooping companies to their own layoff announcements, and even co-launching a petition to protect workers’ rights.

Ecommurz’s Instagram account is anchored by Stories that describe anything from insider gossip to absurd, internet-inflected commentary on trending tech topics. The group also runs a widely followed “Teas Tracker”— a website which displays “tea” and rumors submitted by startup employees and insiders. Tips usually come in via direct message, at the furious rate of around 400 per day, and more than ten people now manage Ecommurz’s website, along with its presence on Instagram, Twitter, and YouTube.

“This ‘Ecommurz’ can compile those messages from employees without much sugar-coating,” Joshua Agusta, an executive director at Temasek’s subsidiary, Vertex Ventures, and loyal follower of the account, told Rest of World. “Sometimes they get info on my portfolio companies faster than me,” he added, amused.

For founders, appearing on Ecommurz can be a nightmare. But even they find value in the account, keeping up to speed on the competition and abreast of industry gossip. “Why would I subscribe to regular tech media if I can find the info on Ecommurz first?” a tech company founder told Rest of World.

In 2021, Ecommurz broke into the mainstream when it shared testimonies from outsourced workers and interns alleging they were underpaid by Ruangguru, a high-profile edtech platform whose co-founder is an advisor to President Joko Widodo. The stories were shared first on Instagram, then went viral on Twitter, and, by the next morning, had landed in mainstream media outlets – and Ecommurz’s name with them. Ruangguru co-founder Iman Usman thanked the public for their “feedback” and issued a promise to improve the system in a now-deleted Twitter thread. (Outsourcing labor is a common practice for startups in Indonesia, but workers can be vulnerable to exploitation due to regulation gaps.)

The account now breaks all types of news. Earlier this year, as the Nasdaq was crashing halfway across the world, Azmi Said Al Ghifari was browsing social media when a post made his heart jump. According to Ecommurz, the state-owned digital wallet LinkAja, also Ghifari’s employer, was planning to fire workers.

“I tried to confirm the news to my managers, but none of them knew about it,” Ghifari told Rest of World, months later. He guessed that only the more senior-level staff had the information. In May, news officially broke that LinkAja was laying off employees, including Ghifari. Ghifari said he was surprised, but thanks to Ecommurz, not entirely caught off guard.

Margianta Surahman, founder of Emancipate Indonesia, a nonprofit focusing on young workers’ welfare, told Rest of World that the Ecommurz account, and its “Layoff Form” and “Talent List” which track the impact of recent layoffs, have increased solidarity among tech workers.

“The presence of anonymous accounts, and this recent culture of ‘spilling tea’ anonymously on social media, have made people feel like they have a safe space to speak up about their working conditions,” Margianta said.

“We see the importance of the petition, so we helped to give exposure to it,” Murz said. In response, Indonesian manpower minister Ida Fauziyah met the petition’s initiators and some of the couriers’ representatives for a dialogue.

Speaking to Rest of World, though, Murz agreed that doing “more than just posting memes” is needed, but drew back from celebrating their own influence.

“So many people are also urging [tech workers] to unionize so we … can protect each other,” they said. “But it’s just too big of a thing to do and I can’t be bothered. If meme-ing can [make an] impact, even if it’s just a little, then I’ll stick with memes.”

Murz’s apathy might be performative, but it’s on-brand. The account’s “Teas Tracker” is influential, often quoted as a legitimate source by mainstream media in Jakarta. Murz, however, brushed off its influence. “I’m kind of surprised that many mainstream media outlets took [information] without asking for permission,” they said. “But our tea tracker isn’t a news site. It’s more like a bank of rumors.”

Agusta, the investor, admitted that there were times he felt upset seeing a portfolio company named on Ecommurz. But he also acknowledged that the account’s influence was a good “reality check” for investors like him as well as for founders, who might be at risk of only being brought good news.

“Sometimes it can be bad,” Agusta said. “But I think we can leverage these accounts … if we can really engage with the discussions.”

Murz and the team are planning to continue developing Ecommurz’s channels, and considering possibilities such as creating spaces where people can find jobs, or where companies can see sentiment on certain topics. So far, the account has done “a few” paid partnership posts. Murz said the team is consciously limiting its monetization activities “so it won’t hurt the experience for followers,” although they do have more partnership plans for the website and the YouTube channel.

“The opportunities are endless,” Murz said. “We are just going to see what the community needs.”

Surprise! This Mining ETF Might Be a Compelling Addition to Your Tech Stock Portfolio

EU calls for war-crimes tribunal amid mass-grave in Ukraine