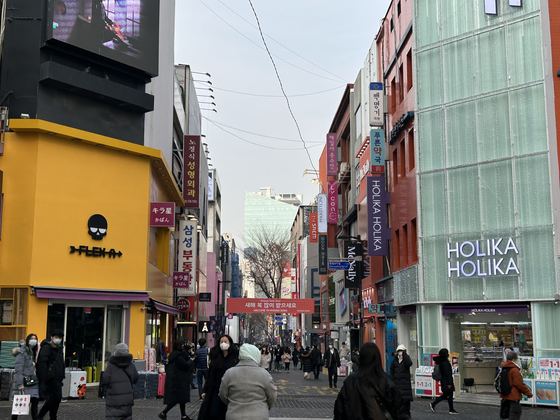 
The city of Seoul, particularly Myeongdong in Jung District in the center of the capital, is pumping with life again. Since social distancing measures were lifted last year, tourists have been swarming back into the country and revitalizing business in the neighborhood, which is heavily reliant on overseas visitors.

The tourist hotspot that the Korea JoongAng Daily visited last week was a world away from the bleak and abandoned streets that were seen for most of the pandemic.

Myeongdong has slowly but conspicuously been returning to pre-pandemic times, as seen by the lines of food carts and music blasting from the road shops, a term referring to stores that are mostly found on streets with a large floating population, like near subway exits or universities.

The Seoul Tourism Organization said that from January to November last year, over 490,000 foreigners visited its information centers, increasing eightfold from 2021. Among them, Myeongdong’s tourism information center had the most visits with 12,801 foreigners. 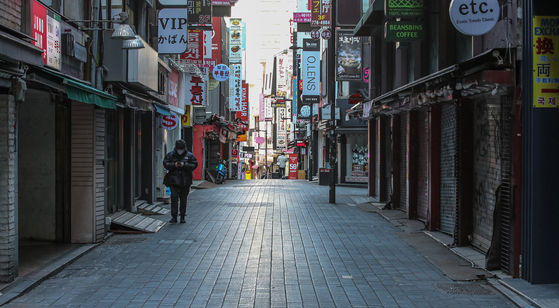 This picture from Jan. 29, 2021 shows the streets of Myeongdong in central Seoul, which were mostly bleak and abandoned. [YONHAP]


Regardless of being a weekday afternoon, Myeongdong was filled with people, both tourists and merchants. It was past lunchtime — around 2 p.m. — but the tables at restaurants and cafes were still mostly occupied. If not seated, people were standing in front of food carts, wolfing down lobster tails or bungeoppang (carp-shaped bread).

But one industry that appeared to still be struggling to return to its former glory is cosmetics.

Bettina Prado and Jillian Lee, both 16 and from the Philippines, had already visited Korea a few times before the pandemic. They had just landed last Friday for the first post-pandemic trip and their first stop was Myeongdong. They told the Korea JoongAng Daily that they were excited to stock up again on beauty items during this visit — but shocked to see how much the atmosphere had changed.

“Covid has definitely changed the road shops here,” said Lee. “I typically hoard, but I’m trying to change right now because it’s not really as interesting anymore; like it’s not as lively as before.”

The Myeongdong Special Tourist Zone Council estimates that there were around 180 cosmetic shops in Myeongdong in 2019. That number plummeted to less than 40 in June last year. 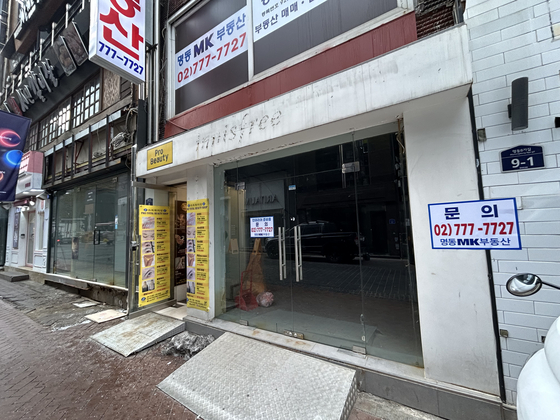 An empty Innisfree store with a “for lease” sign in Myeongdong, central Seoul [SHIN MIN-HEE]


In the second quarter of 2022, the vacancy rate for stores in the Myeongdong area was a whopping 52.5 percent — meaning that more than half of the stores were empty at one point, according to data provided by real estate company Cushman & Wakefield and the Korea Real Estate Board. Makeup stores were responsible for most of that figure.

The Korea JoongAng Daily visited several well-known beauty road shops in Myeongdong last week and interviewed employees and owners to ask how the cosmetics mecca has changed since the pandemic.

The few that each agreed to comment were all cautious about the return of travelers. Though the district was obviously doing better than before, sales had still not returned to pre-pandemic times.

They collectively requested that their names and their franchises remain anonymous, as the brands’ headquarters do not allow interviews without official consent. 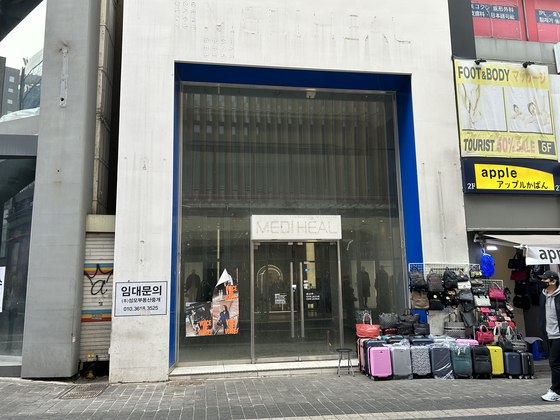 
One makeup store employee in Myeongdong, who had worked at the same store for nine years, told the Korea JoongAng Daily that at the peak of the pandemic, the shop barely saw one customer a day and making even 100,000 won ($80) was difficult.

“These days, we’ve recovered around 25 percent of sales from before the pandemic, and it has gotten better,” they said.

Myeongdong is notorious for its expensive real estate, the Ministry of Land, Infrastructure and Transport said, another factor that made it even more difficult to persevere through the pandemic. 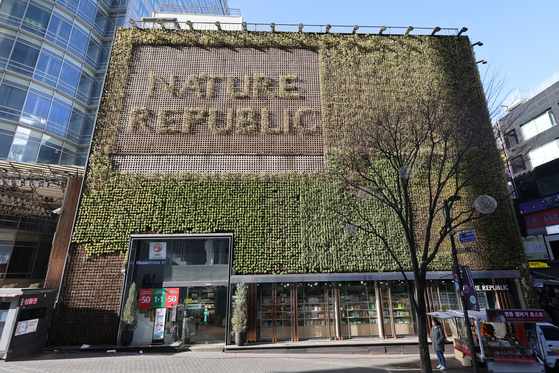 The top eight pieces of real estate on the ministry’s chart were all stores in Myeongdong, including a Woori Bank branch.

After a lengthy hiatus of a year and six months, Nature Republic resumed business at its two franchises in Myeongdong last year. Local reports say the brand is planning to open a new branch in the area this month. 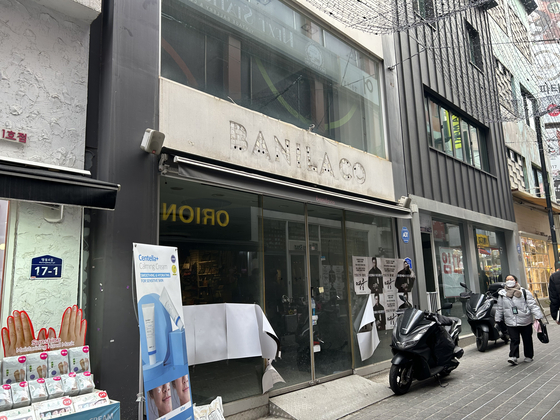 
But according to smaller, road shop owners, making a living is still tough.

While the increase in visitors is easy to see, what many might not realize is that people are not splashing their cash as much as before. 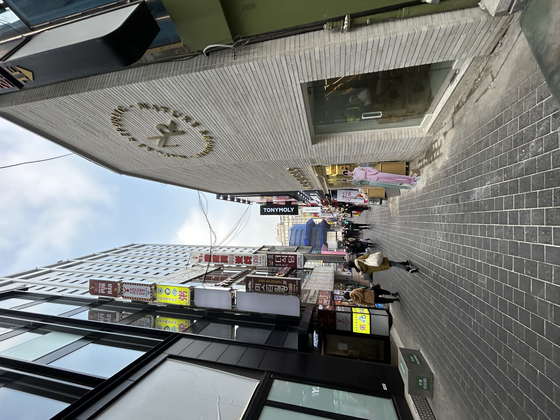 
“One thing that hasn’t recovered is sales,” said one owner of a popular cosmetics brand franchise. “It’s just not the same.”

“After compiling all the data of potential customers who came in and left the store and sales, I would say that business has improved by about 30 to 40 percent,” said an owner of a different beauty brand’s Myeongdong store, who has been in business in the area for 15 years. “But for sales alone, it’s hard to say that they rose even 30 percent.”

Chinese tourists, and their money, are conspicuously absent.

Chinese visitors were such a huge source of revenue for the local cosmetics industry that shop owners would even joke when a Chinese person visits a store, they don’t ask about the price or a specific product; they simply ask for everything on the shelf. 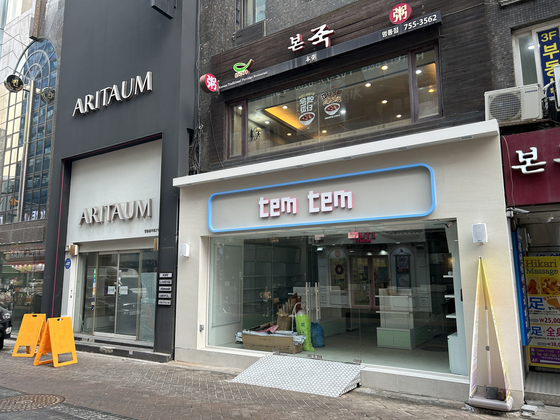 
China imposed strict limitations on outbound travel for its citizens during the pandemic, in an attempt to prevent the spread of the coronavirus. And while these restrictions were lifted earlier this month, the Korean government has imposed strict measures for inbound travelers from the country.

Since the beginning of the year, Korea has raised restrictions on arrivals from China over concerns related to the Covid-19 outbreak that followed Beijing’s sudden abandonment of its zero-Covid policy.

Travelers to Korea from mainland China have to submit a negative Covid test result before boarding their plane and get a PCR test on arrival. If they test positive, they are quarantined at their own expense.

The mandatory testing is to continue until the end of February.

Visitors from Hong Kong and Macau have less stringent restrictions, but they too have to submit negative test results before boarding.

“We’ve seen customers from countries like Singapore, Malaysia, Indonesia and India,” another makeup store clerk told the Korea JoongAng Daily. “The Chinese customers haven’t been able to come, and we haven’t seen much of other big buyers.”

“Consumption patterns have definitely changed,” said the owner who has been in the business for 15 years. “Customers are sensitive about prices and tend to be more rational about what they spend.”

Even if the Chinese travelers fully return to Korea, a handful of makeup store owners and employees remained “skeptical” that business would return to the pre-pandemic era. They cited reasons like the struggling Chinese economy and local brands’ reputation, which have been tarnished in the aftermath of sanctions by China for Korea’s deployment of the Terminal High Altitude Area Defense antimissile system in 2016, otherwise known as Thaad. 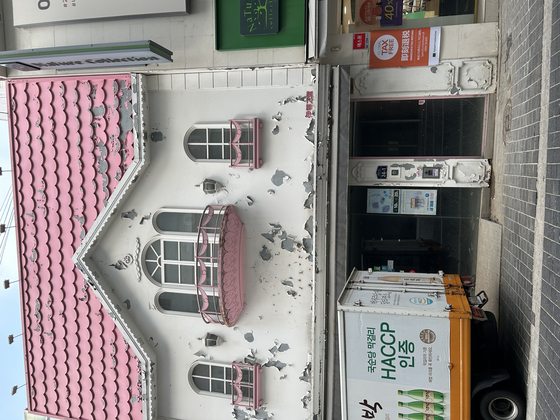 
Over the years, it has become much easier for foreigners to buy K-beauty products online as the industry has continuously branched out across the globe, meaning that a visit to Myeongdong is no longer essential.

Siming Hong, a 24-year-old who was on vacation in Korea for the second time, said she’d definitely noticed the price increase in makeup products compared to when she last visited five years ago.

“The price is not as cheap as last time,” she said. “The [face] masks are about the same price as you can buy in Singapore, because now we have Shopee [a Singaporean e-commerce company] and the online market, which is quite cheap also.”

As for the two Filipino friends, despite their disappointment in what was once one of the most buoyant places in Korea, they agreed that they would still splurge on some cosmetics before returning back home.