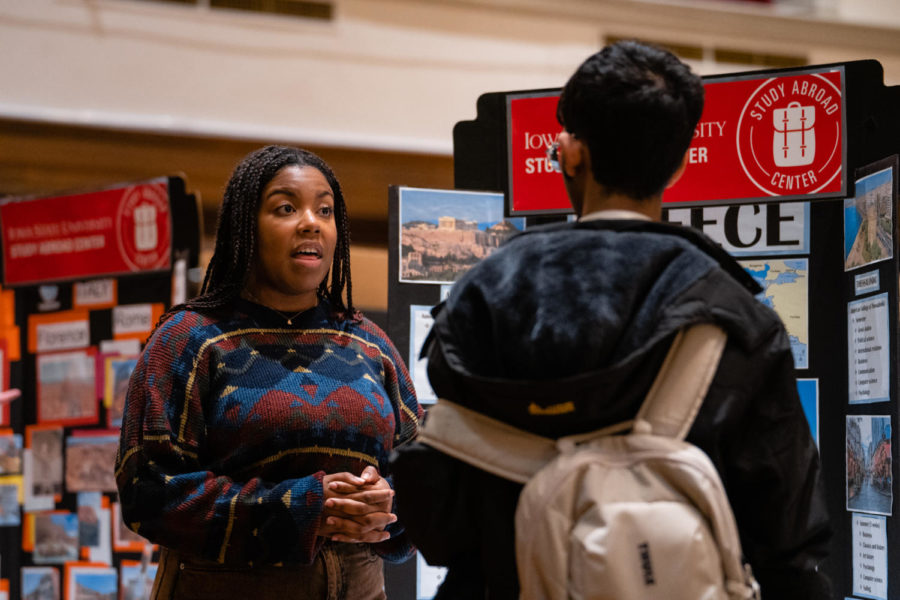 Students who attended the Study Abroad Fair had the opportunity to talk with representatives of different programs and learn about what their programs entail.

Students browsed potential travel options at the Study Abroad Fair Thursday, hearing about program representatives’ first-hand experiences from destinations like London to the University of Ghana in West Africa.

Students who were interested in attending the fair were advised to make preparations prior to the fair to ensure they make the most out of this annual fair. The fair showcased a plethora of study abroad programs worldwide. Students were also given the opportunity to talk to each program representative and ask questions regarding course offerings, costs, location details and eligibility requirements for each program.

Giselle Gonzalez, a junior in animal science, said she was motivated to attend the fair to gain worthy and relevant experience to strengthen her resume.

“I heard that getting out of the country and getting that experience looks good on a resume,” Gonzalez said. “So, I just thought I could check it out at the very least.”

As each program representative came from different professional backgrounds, students were also able to gain different insights and multiple perspectives regarding studying abroad.

Holly Dunlay-Lott, a program representative and a materials science and engineering academic adviser, said she spent her summer in London accompanying engineering students on a four-week study abroad program at Brunel University.

“A lot of the students have never been outside of the country without family,” Dunlay-Lott said. “But it’s just really cool to see how quickly college students can adapt to a totally different environment and kind of immerse themselves in a whole new culture.”

Darius Carey, one of the program representatives and also a current assistant director at Arcadia Abroad, expressed his fondness for when he studied abroad at the University of Ghana in West Africa.

“I really, really enjoyed the time I spent there,” Carey said. “It can be really frustrating and sad sometimes since you’re away from home, but I wouldn’t change it for anything.”

The Study Abroad Fair also provided information for students who are interested in studying abroad but are also concerned with their finances.

Stephanie Lopez, a study abroad adviser, said many students receive scholarships and funds. These scholarships can come from the students’ college or department by using the scholarships they already had, or by using institutional merit scholarships.

John Milstead, a scholarship adviser, said students who demonstrate financial need could also apply for a Pell Grant, which can cover up to $5,000 for qualified study abroad programs. Milstead also mentioned other similar scholarships with different requirements made available to students.

While the majority of the programs were catered toward students interested in studying abroad, the National Student Exchange program offered opportunities for students to study nationally at institutions within the United States, Canada, U.S. Virgin Islands, Guam and Puerto Rico.

Similar to the Study Abroad program, the National Student Exchange program also allows students to transfer to an institution of their choice and transfer the obtained credits back to Iowa State.

Manuela Josipovic, one of the program representatives and a senior in animal science, said that being exposed to a different part of the country gave her the opportunity to survey different vet schools that she wants to go to and will apply to in the future.

Josipovic also said this program serves as a great initiative for students who want to venture out, but are afraid of committing to something blindly.

“I figured this was a good way to explore my options for a bit, and see what I want to do after graduation without necessarily committing to it, since I knew I was coming back,” Josipovic said.

Anna Smith, another program representative and a senior in biology, stressed on the personal growth that she had when having to move across the country alone.

“This opportunity was just a huge confidence builder,” Smith said. “I came into this year feeling like I could conquer anything that came my way.”