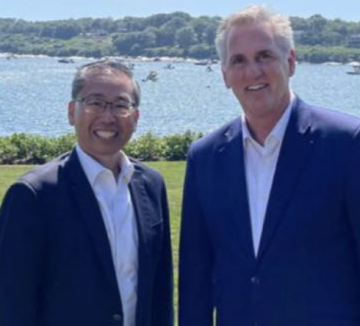 I have mentioned from time to time in this column that I have successfully run two political campaigns when I was not working as a reporter. I handicap elections all the time, but it was intriguing to see how it all goes down from the inside. So, this week I am going to dissect a few key issues and explain how each party needs to play its cards, to keep, or seize control of the U.S. House and Senate in Washington. Let’s “brunch” on that.

“The Economy: From Republicans” –In June, inflation hit an annual rate of 9.1 percent, the highest since 1981. Everything from the price of groceries to the cost of an airline ticket has gone up, without paychecks going up at the same rate. Even if your boss gave you a 5-percent raise last year, 9-percent inflation gobbled that up. Gas prices reached an average of $5 per gallon in the U.S. this year, the highest in history. The price was $2.53 a gallon the day President Biden took office. Interest rates have risen from .25 percent in 2020, to 2.5 percent today, so borrowing and credit are more difficult to get. This is going to be the GOP’s “red meat” issue.

“The Economy: From Democrats” – Yes inflation was bad. But even though it hit 9.1 percent in June, it dropped to 8.5 percent in July. And yes, gas was $5 a gallon in June but the average price now nationally is $3.75 a gallon. Both prices are still not great, but they’re trending in the right direction. Unemployment is at a low of 3.7 percent. Things are getting better, but can they get good enough by November 8th? There will be only two more inflation reports before Election Day, on September 13th and October 13th. This is going to be a tough sell for Democrats. If inflation plateaus or gets worse again, BIG advantage for Republicans. Their pitch is this: if House and Senate candidates (especially incumbents) supported the president’s economic agenda and policies, then they are just as guilty.

“Foreign Affairs: From Republicans” – This is another issue where the Republicans will try to slam President Biden, and by extension, the Democratic Party as a whole. The U.S. diplomatic and military departure from Afghanistan was ugly and chaotic. The dreaded Taliban is back in power, and the chaotic escape scenes at the airport were all caught on videotape. We’ll see that footage in a lot of campaign ads.

“Foreign Affairs: From Democrats” – Many Democrats will try to distance themselves from the Biden administration on this one. After all, it was a unilateral decision by the White House to pull out. As Commander-in-Chief, the president can do that. So, there is no actual Congressional vote to put the fingerprints of the plan upon Democrats. Still, a pull-out from Afghanistan was a battle cry of many who opposed our continued involvement in the Mideast, so the GOP will try to paint incumbents with “guilt by association.” But a lot of Americans felt we overstayed our welcome in Afghanistan, and our mission to create a democracy failed after two decades. Democrats will also continue to blame Russian President Vladimir Putin’s invasion of Ukraine for international economic and diplomatic instability.

“Border Security: From Republicans” – This is another case where news footage and other videos will be used in campaign ads. Illegal immigrants have been pouring across the Southern Border. Lethal synthetic heroin, known as fentanyl, has poured into the U.S., coming from Mexico, Central America, and China. Just this week, 19 people were sentenced to federal prison in Huntington, West Virginia on drug trafficking charges. Forty-seven pounds of fentanyl was found in their possession and authorities said that was enough to kill ten million people.

“Getting Stuff Done” – This may be a standoff, but a slight advantage for Democrats. Both parties are likely to take claim for the trillion-dollar infrastructure bill that passed Congress with wide, bipartisan support. The problem for both sides is that very few of those funded transportation projects are underway yet. Many Democrats will run on passage of the recent Inflation Reduction Act, though there will not be enough time between now and Election Day to see any verifiable results. We won’t know whether it cuts inflation or not, perhaps for several months after the election. Democrats can also lay claim to getting the Safer Communities Act which deals with mass shootings to the president’s desk, though it had key bipartisan support as well. People have been yelling, “Do something!” They did. For now, this will be somewhat of an advantage for Democrats.

“The Legacy of Queen Elizabeth II” – I would be remiss if I didn’t talk a bit about the death of Queen Elizabeth II at the age of 96 on Thursday. During her reign, there were 14 U.S. Presidents from Truman to Biden, and seven Popes, from Pius XII to Francis. Though she was not an elected leader, monarchies are highly politicized, and being a woman (or a man) in power in any political job for 70-plus years is highly remarkable. The fact that this week she welcomed the third female Prime Minister of the United Kingdom during her reign did not go unnoticed.

“Her Legacy to Women was Global” – When Elizabeth assumed the throne in 1952, women in leadership roles across the globe were askance. That year in the U.S. Congress there were 11 female members, ten in the House and one in the Senate. Fast forward to 2022, and there are 146 women in Congress, 24 in the Senate, and 122 in the House. Four of the nine justices now on the U.S. Supreme Court are women. Our vice-president is a woman, for the first time. Now they didn’t exactly ride the queen’s coattails, but what she did show in spades was that, by example, women could lead! That example simply paved the way for others for seven decades. She wasn’t perfect, and yes, she made some big mistakes and blunders, but she led, and she inspired. Sen. Shelley Moore Capito, (R-WV) said, “Here’s where I connect with her as well. She was born in 1926. My mother was born in 1926. And every time I look at Queen Elizabeth, I think about my mother and her strength.” Sen. Capito has been in Congress for 22 years.

Mark Curtis, Ed.D., is Chief Political Reporter for the seven Nexstar Media TV stations serving West Virginia, its five neighboring states and the entire Washington, DC media market. He is also a MINDSETTER™ contributing political writer and analyst for www.GoLocalProv.com and its affiliates.