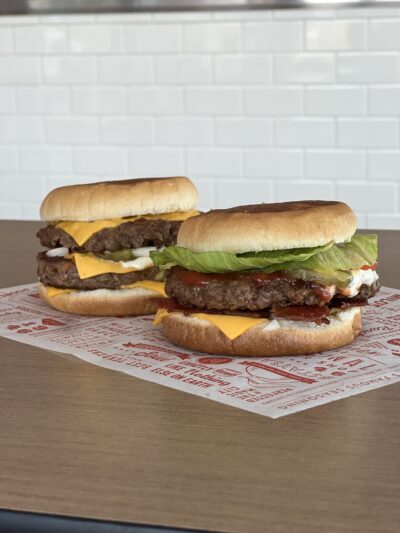 For years after Milo Carlton opened his Birmingham restaurant in 1946, he slung only his unique burgers, slathered in house-made sauce and featuring a bonus bit of beef under the bun. It took a half-century or so for Milo’s to add chicken.

Now its modest menu is coming full circle with a line of what Milo’s calls Thick-Style burgers, including two that premiere this month.

“It was only four years ago that we added the thick burger,” says Mary Duncan Proctor, Milo’s marketing director. “We’re pretty slow to add items to the menu. But burgers are what we’re really good at. We thought, let’s add a few more, completely different from the original Milo’s burger.”

The Thick-Style lineup is designed to evoke the flavor and feel of burgers made at home in the back yard. The newcomers, a Bacon Cheeseburger and the hefty Double Thick Burger, will join the original “Thick” offering, Traditional Cheeseburger.

Now in its initial phase, the rollout is limited to orders made through the Milo’s app in 14 Birmingham-area stores. General restaurant sales will follow, likely in October, in all 24 locations across central and northern Alabama.

The 5½ ounce patties used in the Thick Burger line are—well—thicker than the original Milo’s burger. Based on a recent sampling, extra napkins come in handy.

In the standard-sized newcomer, the bacon and cheese are stacked under the patty, and the lettuce, tomato, pickles, onions, and condiments reside above. “Indulgence on the bottom and then a little bit of veggies on the top,” Proctor says.

The Double Thick, Proctor says, “is for the big boys.” You won’t invoke the old fast-food catchphrase, “Where’s the beef?” 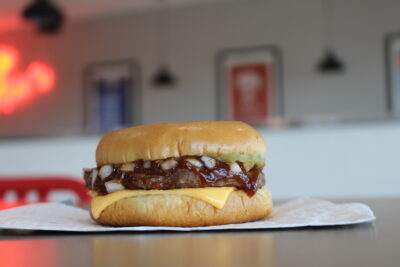 This behemoth weighs in at just over two-thirds of a pound of beef—two of those “Thick” patties—plus three slices of cheese and condiments. Measuring more than two inches from top bun to bottom, it’s a two-hander. Grab at least four napkins first.

Back in the day, Carlton, a former Army mess cook, used a brand of ground beef for his patties that tended to crumble on the griddle. He’d reassemble the pieces on a bun, add a bonus chunk of meat and sweet onions, then cover it all in his signature sauce. That’s still the blueprint, although creating the extra bit is more deliberate now.

Carlton developed the special sauce through trial and error, tweaking the formula based on feedback from his best customers until he felt he’d perfected it. His recipe is still used today; details of the painstaking process of making it are known only to a select few.

But uniqueness divides opinions, so the Thick-Style burger line is the company’s outreach to the other side.

“These,” Proctor says, “are for the Original Milo’s naysayers.”