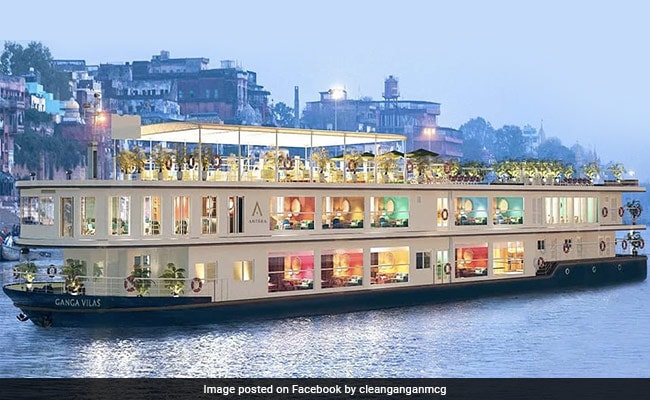 Prime Minister Narendra Modi will flag off the world’s longest river Cruise, MV Ganga Vilas, in Varanasi via video link on Friday and inaugurate and lay foundation stones for several other projects.

World’s longest River Cruise MV Ganga Vilas is the first-ever cruise vessel to be made in India. This is the symbol of Self-reliant India (Atmanirbhar Bharat) in the River Cruise Sector, an official of Port, Shipping and Waterways told ANI.

MV Ganga Vilas will begin its journey from Varanasi in Uttar Pradesh and travel 3,200 km, in 51 days, to reach Dibrugarh in Assam via Bangladesh.

The flag-off ceremony will be in the presence of Minister for Ports, Shipping & Waterways – Sarbananda Sonowal, Chief Minister of Uttar Pradesh Yogi Adityanath, besides other Ministers and senior officials from various Ministries & Departments.

Union Minister for Port Shipping and Waterways Sarbananda Sonowal told ANI that on its maiden voyage, MV Ganga Vilas will carry 32 tourists from Switzerland across 27 river systems and will cruise through various prominent destinations located along the river banks in Varanasi, Patna, Kolkata, Bangladesh, Guwahati and Sibsagar/Dibrugarh.

“The journey will give the foreign tourists an opportunity to embark upon an experiential voyage and indulge in the art, culture, history, and spirituality of India and Bangladesh,” Mr Sonowal said.

The Union Minister further said that this cruise is a culmination of PM Narendra Modi’s vision of making waterways a source of development for the nation. More than 100 waterways are being developed at various locations across India to facilitate the development of the waterway’s ecosystem which will lead to more cruise tourism, boost local businesses along the river banks and lead to the growth of the local economies.

Built to cherish Indian and international design, the modernist ship is 62 meters in length and 12 meters wide and requires a draft of 1.4 meters. With 18 suites and all associated amenities, the vessel has a total carrying capacity of 36 passengers.

PM will release a document – “River Cruise Vision Document 2047” which encapsulates the vision of the progress and growth of River cruise by 2047.

During the event, the PM will also inaugurate Haldia Multi-Modal Terminal, 4 floating community jetties in Uttar Pradesh, the Skill Development Centre at Guwahati in Assam

In order to facilitate the growth of Water Transport in India, IWAI has undertaken several projects, one of which is the Haldia MMT. Haldia is an industrial port city located on the confluence of River Hoogly and the Bay of Bengal in the state of West Bengal. The geographical advantage of Haldia provides a competitive logistics edge with the waterways. It provides the opportunity to export and import the products at quite affordable rates. Developed over an area of 61 acres in the Purba Medinipur District of West Bengal under the Jal Marg Vikas Project, the Haldia Multi-Modal Terminal (MMT) has a cargo handling capacity of 3.08 MMTPA. The berths are designed to handle vessels up to 3000 DWT

An official of Port, Shipping and Waterways further said that the community jetties aim at inclusive growth and would play a key role in improving the livelihoods of people by providing simple logistics solutions for small farmers, fishery units, an unorganised farm-producing unit, horticulturists, florists and artisans focussing on economic activities in & around the hinterland of river Ganga.

With the rapid development & growth of the IWT sector, skilled manpower is the need in the industry. As skill development is one of the major aspects of the growth of any sector, a skill development centre has been developed in Guwahati for Inland Vessels’s Navigation and Engineering Personnel. This centre will provide courses on I.V. Master, I.V. Engineer, fairway development, safety etc. – with the help of IIT, Guwahati and National Inland Navigation Institute (NINI), Patna.

The skill centre at Guwahati will help people of the North-eastern Region to increase their proficiency and employability in the IWT sector.

In addition to this, PM will also lay the foundation stone for a ship repair facility and an elevated road at Pandu Terminal. The elevated road will provide direct connectivity to NH 27. The Ship Repair will save a lot of valuable time as it takes more than a month for a ship to be transported to the Kolkata Repair facility and back. Moreover, it will also mean a lot of savings in terms of money as the transportation cost of the ship will also be saved.

“In line with the vision of PM to make Waterways a source of the development of the Nation, IWAI is and will continue to contribute towards developing the National Waterways and making them more and more efficient,” the official added.

(Except for the headline, this story has not been edited by NDTV staff and is published from a syndicated feed.)

Featured Video Of The Day