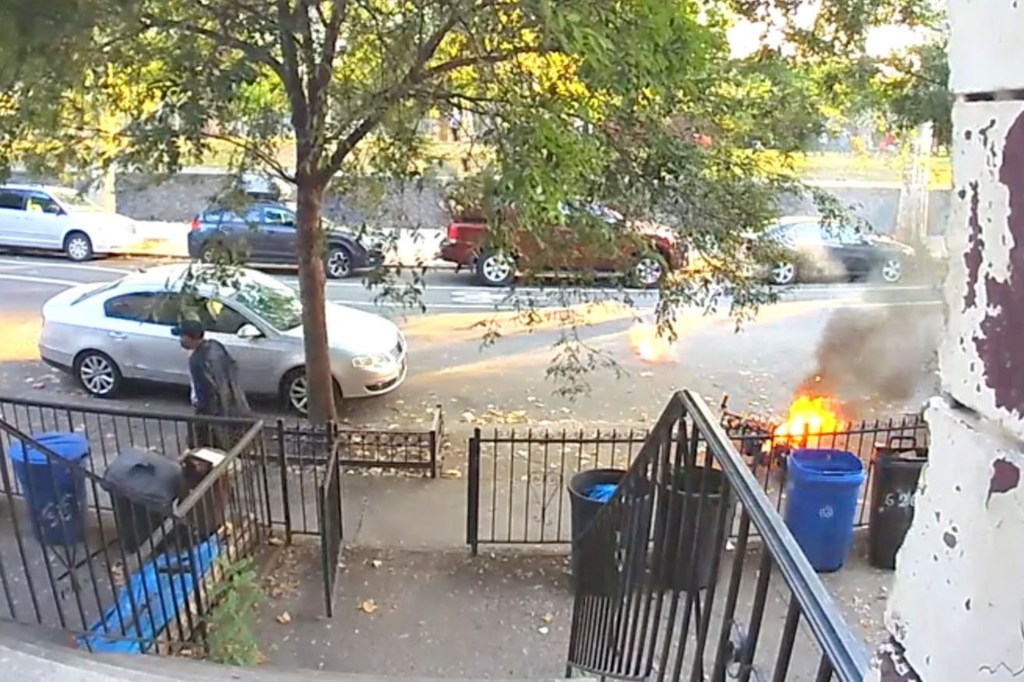 
A Brooklyn food delivery driver barely escaped serious injury Saturday when his e-bike suddenly burst into flames while he was riding on a sidewalk, eyewitnesses said.

Abdel Musleh captured the action in front of his Sunset Park home on video with a ring camera and posted it on Reddit.

It showed one of his neighbors, who delivers food for a living, riding off on his e-bike to work illegally along the sidewalk from a few doors down — but then stopping abruptly seconds later in front of Musleh’s home after the bike caught fire.

The man appeared in shock, barely getting away before mini-balls of fire carrying tiny pieces of the bike shot out in a series of bursts that made loud popping sounds.

Several cars driving down 44th Street between 6th and 7th Avenues had near misses as the flaming shards flew past.

The incident comes amid a growing debate over the safety of e-bikes. Their batteries, which burn fast and hot, have been linked to at least five deaths in the city this year, including 5-year-old Erica Williams, who died last month when her father’s bike caught fire while they were sleeping inside NYCHA’s Jackie Robinson Houses in Harlem.

“These e-bikes are dangerous — especially the cheap ones,” said Musleh. “These [food-delivery] guys helped keep the city running during the pandemic, but we need stronger guidelines of what types of bikes should be on the street to make sure things like this do not happen.”

Musleh said his neighbor appeared injured and walked away limping after escaping the fire, but returned with two gallons of water a few minutes later to put it out. The bike, however, was still smoldering until the Fire Department arrived soon after and hosed it down with water, he said.

Trends in hospitality – Focus on the future of the food industry

When a strategy becomes useless