Newton’s First Law of Motion states that an object in motion tends to stay in motion unless an external force acts upon it.

In the year 2022, we have been reminded how efficiently the stock market facilitates moving money from impatient people to patient people. A bull market in stocks tends to stay in motion unless an external force acts upon it. In this case, the external force is the price of money. Two-year Treasury bond rates have soared in the last 18 months as seen below:

Warren Buffett (Trades, Portfolio) explained in his 1999 Allen and Co. talk how the price of money rising nullified the benefit of owning common stocks from 1964-1981. He then went on to explain the huge bullish price movement from 1981-1998 as being heavily affected by the consistent decline in interest rates. The lower interest rates served as a wind in the sails of common stock ownership. Economic growth from 1964-1981 was 4.3% and from 1981-1998 it was 2.7% on average. This is a good corollary to our view that increased rates help Main Street but not Wall Street.

Newton’s Second Law of Motion states that when a force acts on an object, it will cause the object to accelerate. The larger the mass of the object, the greater the force will need to be to cause it to accelerate. This law may be written as force = mass x acceleration.

Isn’t it ironic that the Federal Reserve Board 2022 tightening efforts might have actually caused a short-term acceleration in inflation? After all, interest rates are the price of money. Therefore, as prices for other things were accelerating, the Fed drastically accelerating the price of money in a relatively short period of time was akin to throwing gasoline on a fire.

Newton’s Third Law of Motion states that for every action, there is an equal and opposite reaction.

What this means is that pushing on an object causes that object to push back against you, the exact same amount, but in the opposite direction. For example, when you are standing on the ground, you are pushing down on the Earth with the same magnitude of force that it is pushing back up at you.

Sir John Templeton reminds us that “bull markets follow bear markets and bear markets follow bull markets.” We believe that just like Newton’s laws establish symmetry in the world of physics, so does the world of economics have symmetry. The bigger and longer the bull market/financial euphoria episode, the greater punishment must be handed out in the ensuing bear market.
Charlie Munger (Trades, Portfolio) has said that the financial euphoria episode which culminated in 2021 was the biggest of his career because of the totality of it!”

Is the 2021 euphoria episode being met by a powerful external force? The answer is an abrupt increase in the fed funds rate (both powerful and external) which was complicated by starting 12-18 months later than when it was needed. For this reason, you must expect an equal and opposite reaction. The darlings of the prior era, which drafted the most heavily on the winds of cheap money, should be the biggest duds on a going-forward basis. It also means that the companies which benefit from the strength in the economy due to the prior liquidity and the inflation created by the prior liquidity should lead the following bull market. 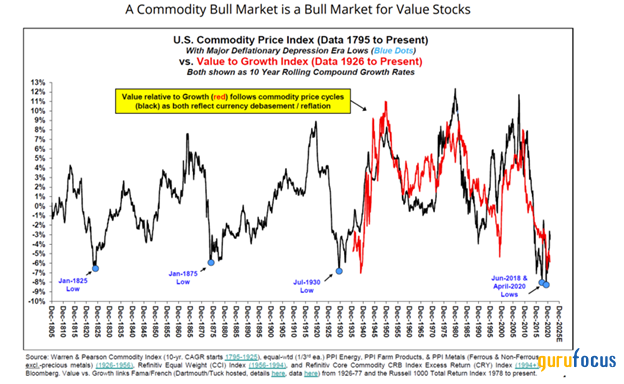 The wheels of motion have been put in place for oil and gas to be the leading group of the next bull market and the external forces are exacerbating energy’s favorable circumstances. What kills the price of oil are the incentives to drill and the stock market reward for doing so. The body politic and the ESG investing craze has assured that investment in fossil fuels has been retarded for five to ten years. Price regulates price and supply only happens to expand if the rewards match the risk.

In conclusion, trust the symmetry that exists in the world of common stock investing. Expect Newton’s laws to ring true, and as always, fear stock market failure.

The information contained in this missive represents Smead Capital Management’s opinions and should not be construed as personalized or individualized investment advice and are subject to change. Past performance is no guarantee of future results. Bill Smead, CIO wrote this article. It should not be assumed that investing in any securities mentioned above will or will not be profitable. Portfolio composition is subject to change at any time and references to specific securities, industries and sectors in this letter are not recommendations to purchase or sell any particular security. Current and future portfolio holdings are subject to risk. In preparing this document, SCM has relied upon and assumed, without independent verification, the accuracy and completeness of all information available from public sources. A list of all recommendations made by Smead Capital Management within the past twelve-month period is available upon request.

©2022 Smead Capital Management, Inc. All rights reserved.
This Missive and others are available at www.smeadcap.com.