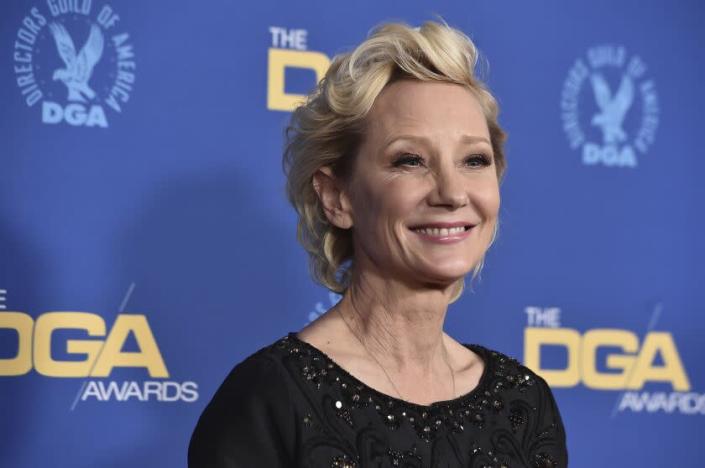 
New audio files from the Los Angeles Fire Department reveal that actor Anne Heche was trapped in her car for nearly an hour before being rescued at the scene of the fiery crash that led to her death last month.

The clips, which were obtained by NBC Los Angeles, detail how firefighters weren’t able to locate Heche’s body for 24 minutes after arriving at the scene and then took 25 minutes to remove her from her car, which was lodged in the back wall of a private residence.

On Aug. 5, Heche was hospitalized with severe burns after crashing her car into the home in L.A.’s Mar Vista neighborhood and causing it to catch fire. Fifty-nine firefighters rushed to the scene and contained and extinguished the fire in 65 minutes.

Before the incident, the actor was captured on video crashing into the garage of an apartment building. She was also seen speeding on another street in the West Los Angeles neighborhood and had purchased a wig at a hair salon in Venice.

According to the audio recordings, LAFD first arrived on the scene at 11:01 a.m. on Aug. 5, five minutes after Heche crashed, and immediately a dispatcher can be heard saying, “There is a person stuck inside the vehicle.”

At 11:18 a.m. another firefighter relayed that there were “no patients at this time.”

Minutes later, a separate LAFD official looked for clarification about the status of the driver of the vehicle, asking, “Let me clear this up, so you do have a patient in the car?”

LAFD Deputy Chief Richard Fields said there was initial confusion about who was injured due to visibility issues.

By 11:25 a.m., the confusion was cleared up with one firefighter saying that he “identified one patient, inaccessible at this time.”

Fields noted that the 53-year-old actor was “pushed up against the floorboard” of the passenger seat, not the driver’s seat, further complicating the firefighters’ ability to see her in the vehicle. Heche’s car was towed out of the home and she was retrieved from the vehicle at 11:49 a.m.

“We have one patient in the auto, being assessed, about to be loaded up on the gurney for transport,” a firefighter said over the radio.

On Aug. 14, the “Six Days Seven Nights” star was removed from life support after being pronounced brain dead a few days prior.

The L.A. County coroner’s office later revealed that Heche died from smoke “inhalation and thermal injuries.” She also suffered a “sternal fracture due to blunt trauma” — an injury that’s commonly caused when the chest strikes the steering wheel during an accident.

Her eldest son, Homer Laffoon, confirmed her death in a statement to The Times on Aug. 12.

“My brother Atlas and I lost our Mom. After six days of almost unbelievable emotional swings, I am left with a deep, wordless sadness,” he wrote. “Hopefully my mom is free from pain and beginning to explore what I like to imagine as her eternal freedom.

“Over those six days, thousands of friends, family, and fans made their hearts known to me. I am grateful for their love, as I am for the support of my Dad, Coley, and my stepmom Alexi who continue to be my rock during this time. Rest In Peace Mom, I love you, Homer.”

On Wednesday, Laffoon, 20, filed a petition in Los Angeles Superior Court to be named administrator of Heche’s estate as well as the legal guardian of his 13-year-old brother, Atlas Heche Tupper. In court documents, the brothers are listed as the only two heirs of their mother’s estate.