Responding to criticism that his government’s judicial reform push threatens Israel’s economy, Prime Minister Benjamin Netanyahu on Wednesday called on professionals and politicians to stop “irresponsible” fearmongering, claiming the plan to transfer power from the courts to politicians will strengthen the economy.

“In recent days I’ve heard fear about the influence of our judicial reform plan on our economic resilience,” Netanyahu said. “The truth is exactly the opposite.”

Brushing off concerns raised by civil society, business leaders, and reportedly the governor of the Bank of Israel, that investors are worried the sweeping reforms will undermine Israel’s rule of law, Netanyahu added, “Our efforts are to strengthen Israeli democracy. Not only will it not hurt the economy, it will strengthen it.”

Netanyahu said his political rivals have been “bringing down a tsunami of lies about the collapse of the economy” and told the opposition to “behave responsibly.”

Joining a wave of protest against what the attorney general and opposition politicians have called anti-democratic judicial reforms, global and Israeli economic and business leaders have raised alarms about harm to investor faith in Israel should the suite of reforms proceed.

Among the prominent critics are a number of Netanyahu appointees, including current and former Bank of Israel governors and former Netanyahu advisers who signed onto an “emergency letter” warning the reforms could damage the economy. The economists warned the proposals could lead to reduced investments in the booming local tech industry, one of the most reliable engines of economic growth.

They also invoked the risk of a “brain drain” and the relocation from Israel of research and development centers, as well as the danger of a reduction in the country’s credit rating.

Netanyahu, who is technically blocked from weighing in on legislation that could affect the outcome of his ongoing corruption trial, has been full-throated in recent weeks about his support for the proposed judicial reforms, which would give the government control over judicial appointments, hand the Knesset power to reinstate laws invalidated by the Supreme Court, and constrain the court’s ability to evaluate Basic Laws, among other proposals. 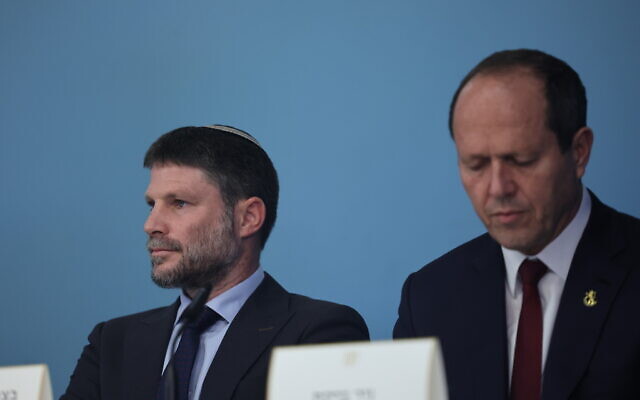 “My impression is when we change it,” and enact judicial reform, “we’ll get a few points of growth,” Netanyahu said of the economy.

Investors should “keep investing in Israel, it’ll be worth it,” he added.

Netanyahu said that the reform package would clear out unspecified judicial holdups affecting the economy, in addition to arguing the overhaul will improve the rule of law by “restoring balance” among the government, the legislature, and the court.

“Superfluous legal processes are like sand in the wheels of the Israeli economy,” he said.

As an example, the longtime premier and former finance minister said that key infrastructure projects have been “stopped and delayed for years because of superfluous legal processes.” 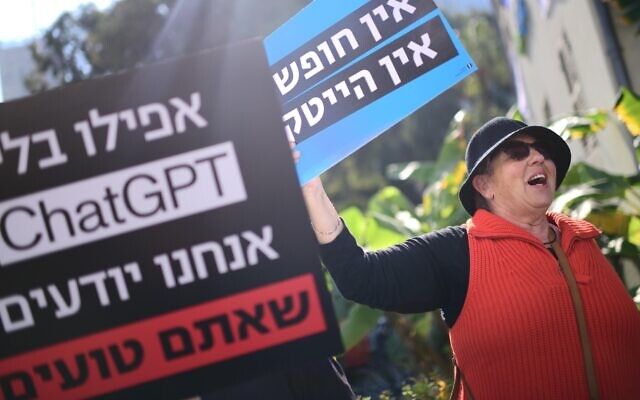 Netanyahu said he personally went to the Supreme Court to enable Israel to extract gas from offshore sites, a process that finally commenced at the close of last year, but that “this step was held up for years because of surplus ‘judicialization.’”

Netanyahu did not specify how judicial reform would decrease economic bottlenecks. The current proposals do not include provisions to add judges or otherwise ease strain on the courts.

Netanyahu also cited the long-stalled Tel Aviv metro project as a victim of unnecessary legal processes. Before working to revive it this month, his political bloc stonewalled legislation for the project in an effort to hasten the collapse of Israel’s last government.

Speaking alongside Netanyahu, Finance Minister Bezalel Smotrich brushed off criticism against the judicial reform plan his far-right party has a hand in crafting as a “political debate.”

Instead, he reaffirmed his commitment to “continue the same responsible policy” of support for a free market pushed by his predecessor, and promised that a “giant bundle of reforms” will be attached to the state budget to help ease the process of doing business in Israel.

Yisrael Beytenu chair Avigdor Liberman, who handed the Finance Ministry Smotrich to Smotrich in December, responded by tweeting that Netanyahu and Smotrich are “A-F-R-A-I-D because they know the truth and understand that no one in the world is ready to swallow their lies and fabrications.”

“The State of Israel is on its way to an economic crisis the likes of which we have not known for decades and Benjamin Netanyahu is responsible,” Liberman said.

Joining Netanyahu and Smotrich on the dais, Economy Minister Nir Barkat, a former entrepreneur and investor, called on detractors to “stop using the economy and high tech for political reasons and personal agendas.”

“High tech was and will continue to be the leading crown of the Israeli economy,” Barkat said, urging critics to not disturb “the branch upon which we all sit.”

“Don’t sacrifice it for a political debate,” he said.

Foreign Minister Eli Cohen, who recently returned from the World Economic Forum’s annual meeting in Davos, Switzerland, claimed: “In none of my meetings, it was not brought up, even in a hint, the judicial reform and its effect on the economy.”

Cohen similarly claimed that it has not been raised in his diplomatic meetings with countries with whom Israel does not have formal relations, saying instead that they were interested in drawing closer to the Israeli economy.

Earlier on Wednesday, hundreds of Israeli economists published an “emergency letter” warning that the far-reaching judicial shakeup being advanced by Netanyahu’s month-old government could have grave implications for the economy.

According to Channel 12, no prominent Israeli economists support the reform proposals.

Judicial reform supporters have asserted the need to rebalance the power of public authorities in the face of an activist Supreme Court.