Since the start of Russia’s invasion of their country in February, a total of 33,000 Ukrainians fled to Israel, of whom nearly half have since left, according to Welfare Ministry figures reported by the Haaretz newspaper.

Among those who arrived, 4,200 were covered by the Law of Return, which allows anyone who has a Jewish parent or grandparent to receive Israeli citizenship.

Of the rest, 14,000 have left for other countries, according to the Wednesday report.

The vast majority of those who have stayed in the country — 12,788 — have asked for humanitarian assistance including mental health support, help buying food, medical assistance and placement in the education system.

Welfare Minister Meir Cohen said most of those who arrived were women, children, or the elderly who received “a big hug from us and governmental and civilian assistance as is appropriate and right.”

“Israel will continue to assist the citizens of Ukraine until the war ends, whether with assistance here in Israel or with humanitarian assistance that we send to Europe,” he said. 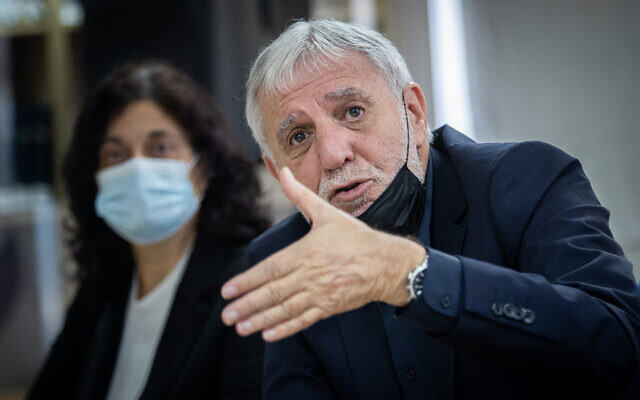 Most of those who arrived headed to cities that have larger Russian-speaking communities, with the biggest number, 616, going to the coastal city of Bat Yam. Another 568 went to Haifa, 486 to Ashkelon, 417 to Netanya, 470 to Petah Tikva, and 434 to Ashdod.

Under existing regulations, Ukrainians do not need a visa for a visit of up to three months in Israel.

In July the High Court of Justice canceled a quota set by Interior Minister Ayelet Shaked that would have capped at 5,000 the number of Ukrainians arriving as refugees who did not qualify for the Law of Return. Shaked also introduced a requirement that Ukrainians fill in an online application form before even leaving their home.

In ruling in favor of a petition against Shaked’s quota, the court rejected the state’s sweeping assertion that those who arrive on a three-month visa would overstay their visits.

Barely a week after Shaked announced her quota plan, Israeli authorities said the number of Ukrainians who had arrived was nearing the limit.

The cap divided the government coalition at the time, with the Meretz party opposing it. It also drew fierce criticism from Ukraine, which said it flouted the visa agreement between the two countries.

Supporting The Times of Israel isn’t a transaction for an online service, like subscribing to Netflix. The ToI Community is for people like you who care about a common good: ensuring that balanced, responsible coverage of Israel continues to be available to millions across the world, for free.

Sure, we’ll remove all ads from your page and you’ll unlock access to some excellent Community-only content. But your support gives you something more profound than that: the pride of joining something that really matters.


Join the Times of Israel Community