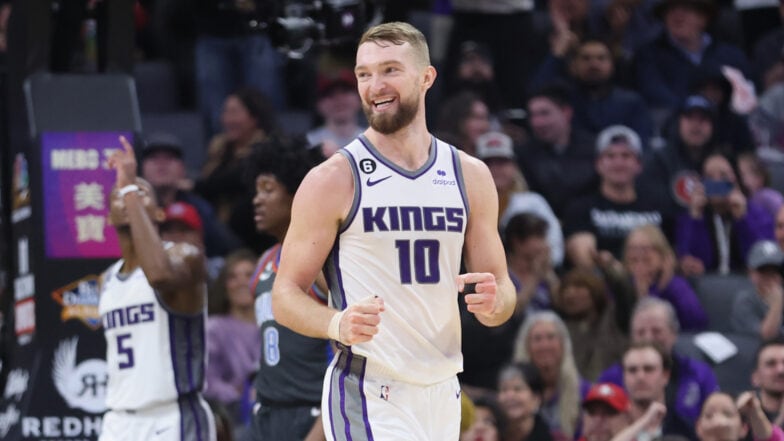 Domantas Sabonis and the Kings host the Raptors on Monday night.

We have a big 10-game slate on tap Wednesday night that features plenty of marquee matchups and no shortage of elevated projected totals. Both are certainly potential good news from a DFS perspective, as it implies key players should see big minutes, and there could be an abundance of highly productive individual performances as well.

As customary, we’ll highlight multiple advantageous positional matchups to exploit at each position for your Yahoo Fantasy lineups, as well as a good trio of candidates that may be best to steer clear of due to a combination of circumstances/salary.

Shai Gilgeous-Alexander, OKC vs. ATL ($46): SGA put up 49.7 Yahoo points across 35 minutes in his one prior encounter against the Hawks, and he checks into Wednesday’s rematch with back-to-back tallies in excess of 50 Yahoo points. Additionally, Atlanta ranks in the bottom half of the league with 25.8 assists per road game allowed (27.7 per contest overall in the last three), and Gilgeous-Alexander comes in shooting a sizzling 53.4%, including 41.2% from distance, in the last 14 games.

T.J. McConnell, IND at ORL ($25): McConnell has been stellar while filling in for Tyrese Haliburton, putting up 15.9 points, 8.7 assists, 5.1 rebounds and 1.9 steals per contest during his teammate’s absence while shooting 64.0% overall. The veteran has drawn starts in his last two games, leading to 48.5 and 43.1 Yahoo points. McConnell is right back in play Wednesday at a very reasonable salary against a Magic team allowing 48.7 Yahoo points per contest to point guards in the last 15, along with the fourth-most assists per home game (26.0).

CJ McCollum, NOP vs. MIN ($33): McCollum sometimes breaks out with a big performance out of the blue after struggling for multiple games, but we’ll go out on a limb and say he may have a bit of a challenge justifying his salary Wednesday. The veteran comes in having scored just 14.7 and 24.8 Yahoo points in his last two contests, and the Wolves check in surrendering the third-fewest Yahoo points to PGs in the last 15 games (43.6). While McCollum is certainly still capable of putting up a respectable return, there are several other guards just above or below his salary who can keep up with him production-wise.

Scottie Barnes, TOR at SAC ($31): Barnes carries an eye-catching salary for a player averaging 35 Yahoo points per contest and exceeding 45 in six of his last seven matches. The talented second-year big is shooting a stellar 53.0%, including 38.5% from behind the arc over the entirety of that span. Tonight he faces a Kings team that’s ranked No. 18 in offensive efficiency rating allowed to power forwards (26.8) while giving up over 42 Yahoo points per game to the position. Sacramento is also conceding the seventh-highest 3-point shooting percentage at home (37.1%), furthering Barnes’ case.

Jeremy Sochan, SAN at LAL ($15): Sochan is another forward with an especially attractive salary considering his upside. The rookie has scored 25.6 to 33.2 Yahoo points in four straight games, shooting 56.1%, including an absurd 75.0% from 3-point range in that span. The big man now draws a matchup against what could be a fatigued Lakers team, one he already has tallies of 24.7 and 39.8 Yahoo points against in two of three prior meetings. L.A. also allows 45.4 Yahoo points per game to power forwards on the season, furthering Sochan’s case at his bargain figure.

Dillon Brooks, MEM at GSW ($16): Brooks has been under 20 Yahoo points in four of his last six games, a stretch during which he’s shooting 33.3% overall, including 22.7% from 3-point range. While his salary is far from prohibitive, several other sub-$20 forwards (Sochan, Donte DiVincenzo, Keegan Murray and Eric Gordon, to name a few) could well outpace Brooks in production.

Domantas Sabonis, SAC vs. TOR ($42): Sabonis is currently boasting career-best figures in rebounds (12.5) and assists (7.4) and is averaging an impressive 45.4 Yahoo points per game overall. He’s scored a subdued but still impressive 37.8 and 34.5 Yahoo points in his last two games, but he posted 48.6 to 71 in the four contests prior, a glimpse at his considerable ceiling. The big man should naturally play an integral part again Wednesday against a Raptors team surrendering 47.3 Yahoo points per game to centers in the last 15 and ranked in the bottom half of the league in rebounds (52.7), assists (25.7) and 3-point shooting (37.1%) allowed per road game.

Daniel Gafford, WAS at HOU ($13): Gafford has shown to be very capable of overdelivering on his current salary, posting 31.6 and 23.9 Yahoo points in his last two games alone. The big man also recently had a late-December/early-January stretch where he eclipsed 30 Yahoo points in four of six games, and he now faces a Rockets squad that’s allowing 58.5 Yahoo points per contest to centers in the last 15 games. Additionally, Kristaps Porzingis (ankle) remains out for Washington, which naturally should continue giving Gafford enhanced opportunity.

Rudy Gobert, MIN at NOP ($25): Gobert’s nagging groin issues earn him this designation, as the big man has already exited games early due to the injury in recent days. While his positional matchup against the Pelicans is appealing, and he just delivered 45.7 Yahoo points against the Rockets in his last game, the fact is there are many other center options on a 10-game slate, making him likely not worth the risk.

Winner of the FSWA 2016 Newcomer of the Year Award, Juan Carlos Blanco has been playing fantasy sports for over 20 years and covers NBA, MLB, NFL, CFL and Arena Football for Rotowire.com, including serving as the beat writer for teams in multiple sports. He has previously written for KFFL.com and remains an avid season-long and daily fantasy player in multiple sports as well.