MILWAUKEE (CBS 58) — The life of a musician includes a lot of time on the road. Just ask Vermont’s Noah Kahan.

“I’ve spent about six years now on the road,” Kahan said. “A lot of those were spend in a Sprinter van, which obviously, you have to stop for gas, and you get out at all these gas stations all over the country.”

Kahan’s single “Stick Season” has taken the music world by storm, even peaking at number one on Spotify’s viral songs in 2022. His tour, set to kick-off Jan. 27, has several sold out stops across the country.

While many are excited about his music, Kahan was surprised the talk of Twitter this week was his “National Gas Stations Top 10” list. On Monday, he posted his list, one that included places like Circle K, Buc-ee’s, Pilot and Wawa. One location that didn’t make it: Wisconsin’s Kwik Trip.

“I didn’t realize gas station Twitter was going to be so upset about my ranking,” Kahan said. “I didn’t even know how many gas stations had social media accounts and they’re all in my replies, like I’m the belle of the ball, baby.”

Kahan says his admittedly “biased” gas station rankings are based on criteria including snack and food selections, friendliness of the staff and cleanliness of the bathrooms. After finding out he’d never been to one of its stores, Kwik Trip reached out to the artist via Twitter to formally invite him next time he’s in Wisconsin.

“The man has never even tried our chicken tenders, Glazers, or brown cap chocolate milk,” Kwik Trip said to CBS 58 in a statement. “We honestly feel bad for Noah. Help us help him.”

Fortunately for Kwik Trip, and perhaps Kahan, the artist will have the chance to take the popular Wisconsin one-stop-shop up on its offer when he travels to Wisconsin for a sold-out show at the Miller High Life Theater on Feb. 11.

“I absolutely love Wisconsin,” Kahan said. “We’ve only played in Milwaukee one other time, and it was an absolute blast. The crowd was so fun.”

While excited to take the stage, he’s also looking forward to giving Kwik Trip a fair shake at breaking the top 10.

“I need to stop by Kwik Trip when we’re in Wisconsin,” Kahan said. “From what I hear, it’s a great place. No judgments yet, but I just need to get into one, try the Glazers, try the bathroom out, hopefully they have a Dyson dryer and they’ll be right there in the top five.” 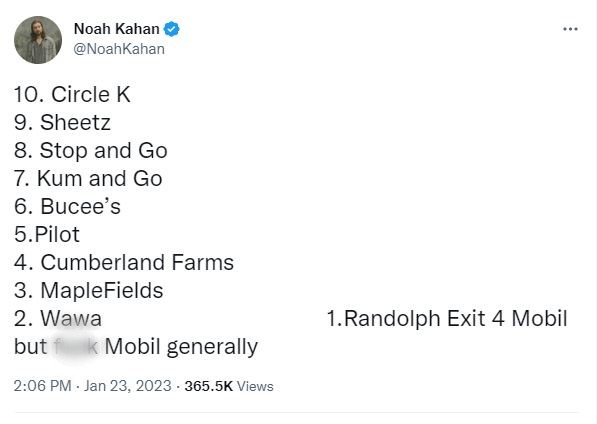