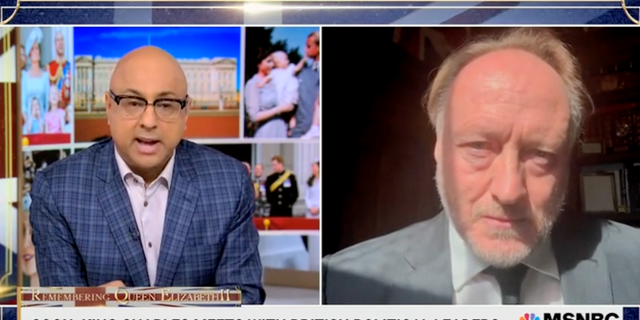 British historian Andrew Roberts clashed with MSNBC host Ali Velshi on Saturday over the anchor’s claims that while many loved Queen Elizabeth II, other people throughout the world are tired of the British monarchy and see it as a vestige of colonial oppression.

Roberts blasted Velshi’s assertions as “wildly overstated” and insisted that between “80 to 85 percent” of British people value the monarchy. Velshi defended his framing and insisted that people who detest the British crown should be represented in his reporting. The segment ended on a tense note between the two.

The dramatic exchange happened during MSNBC special coverage, “Remembering Queen Elizabeth II,” in which Velshi and correspondents on location in the U.K. covered the aftermath of the Queen’s death.

QUEEN’S FUNERAL COULD BE CURTAINS FOR PRINCE ANDREW, EXPERT SAYS

On Saturday, MSNBC anchor Ali Velshi argued with British historian Andrew Roberts about the controversial legacy of the British Empire.

The coverage also featured commentary on the occasion from British guests, such as Roberts, who took issue with Velshi’s first point in their conversation. Velshi began the segment by asserting, “Let’s discuss this: the idea that there are people – we just had an historian say that there are many people who are ‘Queenists’, they’re not monarchists. They liked her. They’re either bored with the institution or think that it needs to change or aren’t going to be that interested in the next king.”

Roberts immediately discounted this perspective, stating, “I think that’s wildly overstated, frankly. When you look at all the opinion polls, we’re about 80 to 85 percent in favor of having a constitutional monarchy, whoever’s on the throne.”

“I think this is extremely overdone, frankly,” the historian added, before explicitly targeting Velshi’s introduction. “Rather, I’m afraid to say, as your introduction was, if we had given so much pain to people throughout history, why was Charles [III] chosen by every single commonwealth country?”

Velshi scolded, “Andrew, this is not a propaganda show.” He then continued to cut off his guest, “I need you to stop for a second. Are you really taking issue with the horrors of colonialism, Andrew?”

In his coverage of Queen Elizabeth II’s death, MSNBC’s Velshi reported on the “many millions” of people who see the British monarchy as a horrific oppressor.
(Alastair Grant – WPA Pool/Getty Images)

Roberts responded, “I’m certainly taking issue with your remarks about slavery, which we abolished 32 years before you did, and we didn’t have to kill 600,000 people in a civil war over it.”

Seeming to take personal issue with Roberts’ defense of the monarch, Velshi responded, stating, “When I was born, the British Empire still existed.”

Roberts then asked “which country,” to which Velshi said, “Kenya.” The historian pushed back once again. “Right, and the Kenyans not only supported the appointments of Prince Charles, now King Charles, as the head of the commonwealth, but we’ve just had a fantastic statement from the president of Kenya saying what a wonderful thing the Queen was.”

“And so why on earth do you want to concentrate on only the negative things of an institution which is a hundred years ago now?” Roberts asked, seemingly referring to British colonialism.

Velshi insisted he wasn’t concentrating on the negative, just merely mentioning the “many millions of people… who don’t think we should be celebrating the British monarchy right now.” The host added that many of these people are in Britain, which Roberts scoffed at, adding, “No not many in Britain – where are these people in Britain? You know, as I said, between 10 and 15 percent of don’t want a monarchy.”

Not budging, Velshi asked, “So you’re just prepared to discount 10 or 15 percent of the British population who think this is an anachronism?” After a bit more similar back and forth, Velshi ended the segment and accused Roberts of whitewashing history in defense of the crown.

Summer flying has been rough, but smoother skies could be ahead