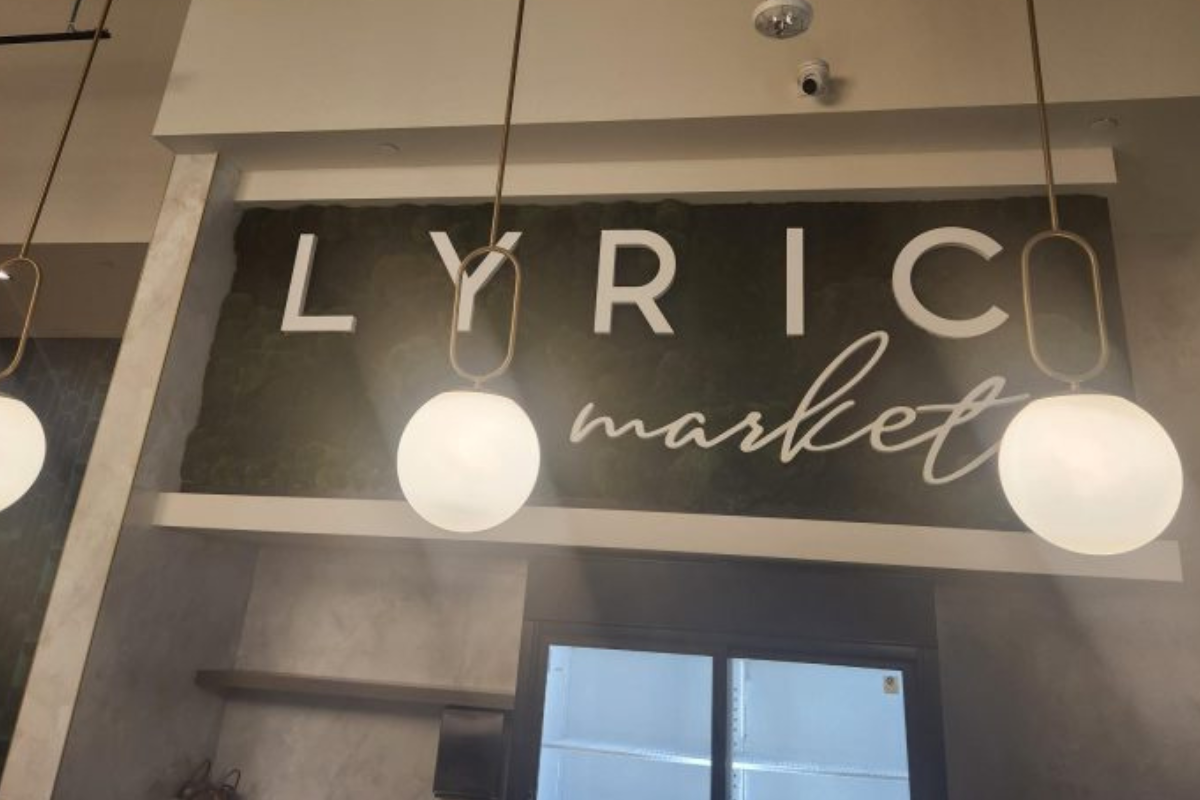 The front area of Lyric Market. Photo by Minh Truong.

Support informative articles like this one for only $25, and we’ll send you a gift! Limited supply available; click for details.

Houston was late to the game when it came to food halls but has steadily made up for lost time, adding Railway Heights Market, on Washington, in the Heights and Blodgett Street Food Hall in Historic Third Ward. Downtown Houston is home to five food halls alone: Finn Hall, Understory, Underground Hall, Bravery Chef Hall, and Post Market. The latest entry is the long-awaited Lyric Market located at 411 Smith, on the ground floor of Lyric Tower, an office space and multi-use building, which had its grand opening this month after a long delay.

Lyric Market is operated by Hospitality HQ, a consulting and management group headed by Akhtar Nawab, a chef, restaurateur, TV personality and cookbook author. Hospitality HQ operates several other food halls throughout the country. The project was announced way back in 2018 and it was originally slated to open in 2019. The opening was delayed, and then the pandemic hit. A website for Lyric Tower touts a market of over 31,000 square feet and twenty-two different vendors, but for now, it’s open with nine vendors, with concepts that include sushi, smash-burgers, Cajun food and Israeli cuisine.

The only way to describe Lyric Market is “sleek.” While other food halls downtown have a come-as-you-are vibe, Lyric’s placement in the heart of the Theater district, next to the Wortham Theater and Hobby Center, invites the dress-to-impress crowd. It’s unsurprising to see guests dressed up for a night on the town or men in suits closing a deal.

At the center of the market is Rhapsody Bar, where you can saddle up with a libation. The myriad of food choices starts with Horu Sushi, the first stall you see as you walk in from the front entrance. It is helmed by chef Chin “Steve” Liang and there are three other locations at food halls throughout the country, including Legacy Food Hall in Plano. The menu has your standard sushi and sashimi, poke bowls and specialty rolls including the namesake Horu Roll with tuna, salmon, tempura bacon, crab, avocado, masago, scallions, spicy mayo and eel sauce.

If you’re looking for barbecue before a show, there’s Lottie’s Smokehouse, from pitmaster Scott Lottie who has taken his long-running south-side food truck, at 6404 Tierwester, into the city. Expect Texas-style brisket, ribs and turkey, but leave room for the made-from-scratch cookies. Another locally owned stall is 1929 Po-Boy Kitchen, from Houston native and chef Monica Landry. She and partner, Garfield Landry, offer the full-on New Orleans experience with po-boys dressed in mayo, remoulade, lettuce, tomato and pickles and topped with debris, shredded roast beef that has been slow cooked and simmered until it creates a gravy, and yakamein, a beef noodle soup with oxtails and boiled egg, which according to their menu “isn’t quite pho nor ramen, with Creole flair”.

The food stall that may be most-anticipated is Alenbi Falafal + Hummus. The Middle Eastern street food concept is run by Sof Hospitality, the group behind Doris Metropolitan, Bādolina Bakery & Café, and Hamsa, the recently opened Israeli restaurant in Rice Village. The menu at Alenbi is a casual, scaled down version of Hamsa, focused on hummus, shawarma and falafel. Those that have dined at Hamsa will recognize the hummus at Alenbi as the hummus complet, the creamy spread is flecked with chickpeas, topped with tahini, olive oil and a hard boiled egg slice. This was easily one of the best things I ate during my visit.

If you’re in the mood for Mexican food by way of New York, right next door is Mexology, a modern Mexican kitchen from chef Ivy Stark, who is no stranger to food halls. She runs MexologyNYC and BKLYNwild, both located in Time Out Market New York. Try the taco al pastor that’s shaved directly from the trompo, a vertical, rotating spit of marinated pork shoulder.

Venture next to an Indian street food stand, Kati Roll Wala, a franchise set to open in other locations on the East Coast. A kati roll is essentially an Indian wrap; flatbread filled with meat, veggies, onions and sauce. For more casual fare, there’s BAD CHX, another food truck making its food hall debut with Southern-fried and Nashville hot chicken sandwiches and tenders, and Mission Burger, offering smash burgers, hot dogs and onion rings. Finish (or start) your food tour with Press Waffle, the Belgian waffle vendors that were featured on Shark Tank.

Does Houston really need another food hall? Now that Lyric Market has finally opened, we say, “Sure, why not?” The lights, the buzz and the massive art installation from artist Alex Arzu brings more life (and food options) to downtown — and that couldn’t possibly be a bad thing.