JPMorgan Chase chief executive Jamie Dimon predicted the American economy will probably tip into a recession next year, warning the downturn threatened to spark “panic” in credit markets and wipe an additional 20 per cent from the value of US stocks.

The comments from Dimon, whose economic pronouncements are closely followed by investors, followed similar remarks last month by billionaire investor Ken Griffin and point to a growing consensus among senior figures on Wall Street over the likelihood of a US recession.

In an interview with CNBC on Monday, Dimon listed rising interest rates and Russia’s invasion of Ukraine as factors stoking the risk of a downturn in 2023.

“These are very, very serious things, which I think are likely to push the US and the world — I mean, Europe is already in recession — and they’re likely to put the US in some kind of recession six to nine months from now,” Dimon was quoted as saying.

Dimon said early signs of distress were evident in the financial system, pointing to the depressed market for initial public offerings and high-yield debt deals, and predicted the pain would soon spread into other areas.

“The likely place you’re gonna see more of a crack and maybe a little bit more of a panic is in credit markets,” he said.

In June, Dimon had warned of an economic “hurricane” and on Monday he again encouraged investors to be “very very cautious”. He added: “If you need money, go raise it.” 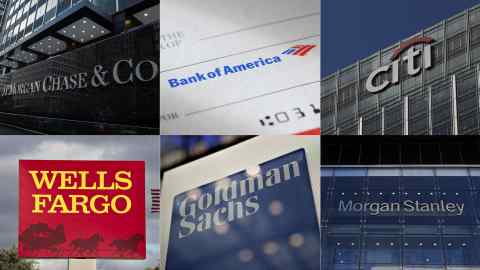 Asked where he saw the trough for the benchmark S&P 500 share index, which is down more than 20 per cent this year, Dimon said it may still “have a ways to go” and “could be another easy 20 per cent”.

JPMorgan, the largest US bank by assets, will report earnings on Friday. Analysts are predicting it as well as the other big banks will set aside more than $4bn to cover potential losses from bad loans in a sign of the growing pessimism around the US economy.