Despite the meeting last month between Prime Minister Yair Lapid and Jordan’s King Abdullah II in Amman and the spirit of cooperation it suggested, statements by Jordanian officials and reports from the Arab world indicated that relations between two countries — which have been at peace since 1994 and share a significant land border — could be entering a tense phase.

Until recently, Palestinians wishing to fly abroad were required to travel to Jordan and board a flight there, or to secure a hard-to-come-by entry permit into Israel to fly from Ben Gurion Airport.

But in an effort to alleviate heavy crowding at King Hussein Crossing — the West Bank’s sole crossing with Jordan — Israel’s Airports Authority recently announced an initiative allowing Palestinians to fly to Turkey through Ramon Airport and board connecting flights there.

While the original plan for Turkish Airlines to operate the route was delayed, Israel’s Arkia Airlines stepped in to operate the first flight for Palestinians from Ramon Airport to Cyprus on Monday.

Continued flights will potentially mean less Palestinian movement through Jordan and, subsequently, less income for the kingdom from tourism. 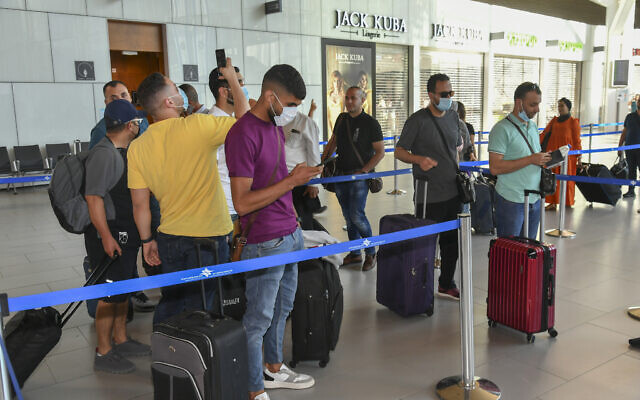 Palestinian residents of West Bank are seen ready to board a flight at Ramon Airport on August 22, 2022. (Flash90)

According to Jordan’s Society of Tourism and Travel Agents, some 500,000 Palestinian travelers enter the country each year via the King Hussein Bridge, also known as the Allenby Bridge, for tourism or transit purposes.

Opening Ramon Airport for Palestinian travelers could decrease the number of Palestinians entering Jordan by 55-65 percent, according to Jordanian media.

This is perceived by some Jordanian officials and analysts as opposing the spirit of cooperation and peace between the two countries.

The London-based pan-Arab news outlet Al-Araby Al-Jadeed cited on Thursday a statement by Jordanian lawmaker Samih Al-Maaytah criticizing Monday’s flight to Cyprus with Palestinian passengers, charging that it will come at the expense of transit through Jordan.

His statement was echoed by a member of Jordan’s Parliament, Khalil Attia, who recently said that Israel’s plan to allow West Bank residents to use Ramon Airport would harm Jordan’s local airlines, “which have long relied on the transfer of a large proportion of the Palestinians to neighboring countries.”

The move may also harm or delay existing strategic projects between Israel and its neighbor, such as exporting Israeli gas to Europe through the Arab Gas Pipeline that goes through Jordan, according to analysts cited Wednesday by Qatar’s state-owned Al Jazeera news network. 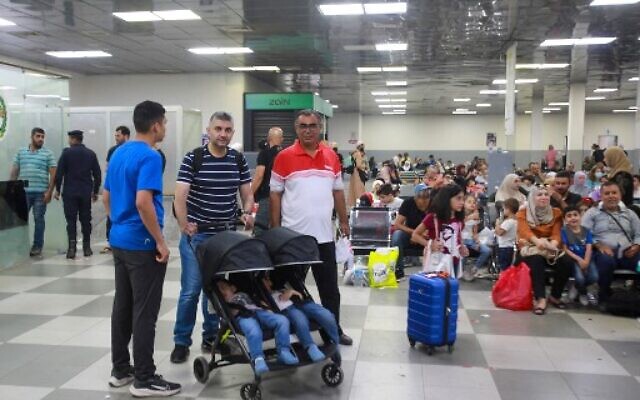 Passengers sit in a waiting room on the Jordanian side of the King Hussein Bridge (also known as Allenby Bridge) crossing between the West Bank and Jordan on July 19, 2022. (Khalil Mazraawi/AFP)

Those analysts were also quoted as saying that Ramon Airport violates Jordan’s sovereignty as it “affects the air navigation of King Hussein Airport in the city of Aqaba, southern Jordan, and enters Jordanian airspace during the landing and take-off of Israeli and incoming planes.”

Speaking to Al Jazeera on the issue, former Jordanian information minister Muhammad al-Momani said that Israeli-Jordanian cooperation was based on the idea of “operating King Hussein International Airport in Aqaba, rather than establishing a [new] airport,” adding that two competing airports in the region will “affect the horizon of the peace process between the two countries.”

Jordan had opposed the establishment of Ramon Airport from the outset, citing its proximity to King Hussein Airport. The kingdom raised its concerns with the International Civil Aviation Organization in 2019.

According to the reports, Jordan also considers Israel’s move in regard to Palestinian international travel from within its territory an attempt to normalize the Palestinians’ current situation and distance the prospect of a long-term solution. 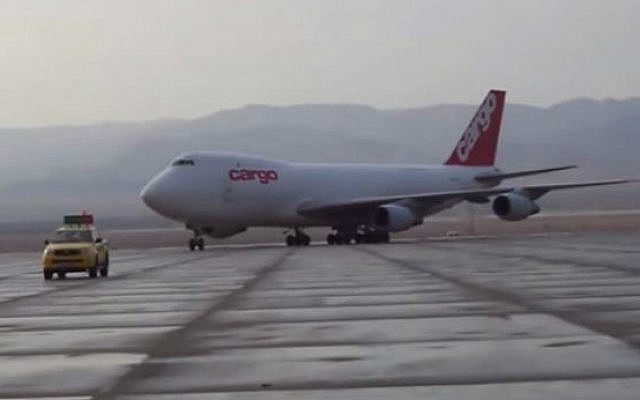 An illustration of a plane on the tarmac of King Hussein airport serving the border city of Aqaba. (Screen capture: YouTube)

During the official inauguration of a power plant in the Jordan Valley meant to increase electricity supply to Palestinians in the West Bank, Jordanian Prime Minister Bisher Al Khasawneh reiterated Wednesday his country’s support for the Palestinian cause.

Palestinian Authority Prime Minister Mohammad Shtayyeh said during the event that “neither Ramon airport nor any other airport is an alternative to our depth of relations with Jordan in terms of transport and movement,” arguing that had Israel truly wanted to ease restrictions on Palestinians it would have reopened an international airport located between Jerusalem and Ramallah. The airport was closed for civilian traffic after the Second Intifada erupted in 2000.

On social media, Jordanian activists protested the first flight of Palestinian via Ramon Airport alongside the hashtag “#Palestinian_normalization_betrayal.”

According to Al Jazeera, some Jordanian activists referred to the use of Ramon Airport by Palestinians as “treason and a stabbing in the back of Jordan for all the positions it took with the Palestinian people in defending their just cause.”

Supporting The Times of Israel isn’t a transaction for an online service, like subscribing to Netflix. The ToI Community is for people like you who care about a common good: ensuring that balanced, responsible coverage of Israel continues to be available to millions across the world, for free.

Sure, we’ll remove all ads from your page and you’ll unlock access to some excellent Community-only content. But your support gives you something more profound than that: the pride of joining something that really matters.


Join the Times of Israel Community