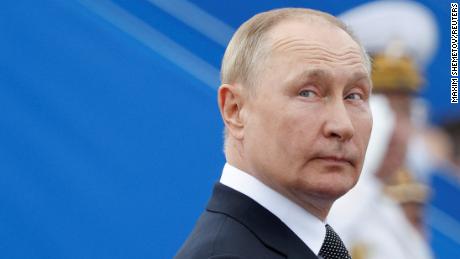 Izium, which sits near the border between the Kharkiv and Donetsk regions, had been under Russian occupation for more than five months and had become an important hub for the invading military.

“We have just started clearing the town. First military units are in,” the officer told CNN.

A spokesperson for the Bohun Brigade of the Land Forces of Ukraine said in a statement earlier on Saturday that “Russians escaped and left weapons and ammo behind. City center is free.”

Several videos of Ukrainian troops standing at the Izium sign at the entrance to the city were posted on Telegram.

One piece of footage was purportedly filmed by a reconnaissance unit of Ukraine’s 25th Paratroopers’ Brigade. Over the video, a voice is heard saying: “We are in Izium. Everything will be Ukraine. Our flag is here already.”

Earlier in the day, the Russian-backed head of the Izium city administration, Vladislav Sokolov, was quoted by the Russian state news agency RIA as saying the situation in Izium was “very difficult.”

“As a result of constant shelling by Ukrainian troops over the past two weeks, there has been a lot of destruction in the city,” Sokolov was quoted as saying. It’s not known exactly when Sokolov spoke to RIA.

Ukrainian forces had already swept into the town of Kupyansk, some 30 miles to the north of Izium, while apparently meeting little resistance.

Recapturing the two cities is a big strategic win for Kyiv, five days after Ukrainian forces began a rapid armored offensive eastward through the Kharkiv region. Russia was using Kupyansk as a rail hub to resupply its forces and Izium as a launching pad for attacks southwards into the Donetsk region.

Oleksiy Reznikov, the Ukrainian defense minister, said Saturday that Ukraine’s allies are “amazed” by the recent successes of the country’s military.

Speaking at the end of a meeting of the Ukraine Defense Contact Group in Ramstein Air Base, Germany, Reznikov said that Ukraine’s “partners were positively amazed by the dynamics of our troops’ activities” in the south and east of the country.

As Russia forces scramble to counter the Ukrainian advance in the east, Moscow is trying to reinforce its embattled military units there.

Video footage taken by a Russian military journalist, Yevgeniy Poddubny, showed Russian helicopters arriving in the region and at least one unloading an armored vehicle.

Poddubny reported that Russian military headquarters were using Mi-26 helicopters to reinforce units in Kharkiv with both men and armored vehicles, redeploying reserve troops to both Kupyansk and Izium.

“The helicopters are dropping in at landing points all along the line of contact… The reinforcements will help to stop any further advance of the Kyiv regime,” Poddubny said.

In a later report he said that Kupyansk had come under artillery fire from Ukrainian armed forces and that a bridge across the Oskil River in the city had been seriously damaged.

“Our reserves are arriving at the front line,” Poddubny said. “The defense of Kupyansk continues.”

Meanwhile, Ukrainian President Volodymyr Zelensky said Friday his troops had “liberated and taken control of more than 30 settlements in the Kharkiv region.”

“Measures to check and secure the territory in some villages of the region are ongoing, we are gradually taking control of new settlements — we are returning the Ukrainian flag and protection for all our people everywhere,” Zelensky said in his daily address.

The advancing Ukrainian troops have reported scenes of destruction as they retake areas from Russian control.

The head of the Kharkiv region military administration, Oleh Syniehubov, said he had toured recently liberated areas where the Russians had “left broken infrastructure and houses, many trophies and piles of garbage,” and posted photographs of the scenes on Telegram.

“People, without exaggeration, met our soldiers with tears in their eyes,” Syniehubov said.

“Residents, of course, need help. Most villages do not have electricity or gas. In the near future, we will restore them and bring in humanitarian aid.”

He said the head of one liberated village had been detained on suspicion of collaborating with the occupying Russian forces, and warned any other collaborators that “no traitor will escape responsibility.”

Russia has tried to paint a different picture of the Ukrainian counteroffensive. Kirill Imashev, the military correspondent of a Russian Telegram channel, Readovka, said that Russian forces had left Kupyansk and retreated across the river Oskil to “regroup,” but claimed that residents of the city had “left their homes in a hurry, fearing reprisals from the Kyiv regime.”

“Hundreds of cars are leaving from Kupyansk to the LPR [self-declared Luhansk People’s Republic],” he said.

The available evidence on social media networks is that the civilian population in the areas liberated have greeted Ukrainian forces with enthusiasm. Ukrainian officials have vowed that anyone who collaborated with occupation forces will face criminal sanctions.

Syniehubov said that residents of the recaptured areas will need help. “Most villages do not have electricity or gas. In the near future, we will restore them and bring in humanitarian aid,” he said.

He said the head of one liberated village had been detained on suspicion of collaborating with the occupying Russian forces, and warned any other collaborators that “no traitor will escape responsibility.”

Ukraine said some Russian troops are now deserting due to the “significant losses” they have suffered.

The General Staff of the Ukrainian Armed Forces said Friday that at least 15 desertions had taken place.

Soldiers were abandoning their uniforms and wearing civilian clothes in an effort to blend in while attempting to return to Russian territory, it said.

The last week has seen the most ambitious ground assaults by the Ukrainians since Russia launched its invasion.

Video and satellite images that have been geolocated by CNN show those advances have involved sustained attacks on command posts, ammunition stores, and fuel reserves far behind the front lines.

A senior US official said Ukrainian forces had achieved some success in attacking Russian supply lines, with the intention of cutting off and isolating Russian troops west of the Dnipro River.

Explainer: Credit Suisse stuck in spotlight ahead of strategy shift