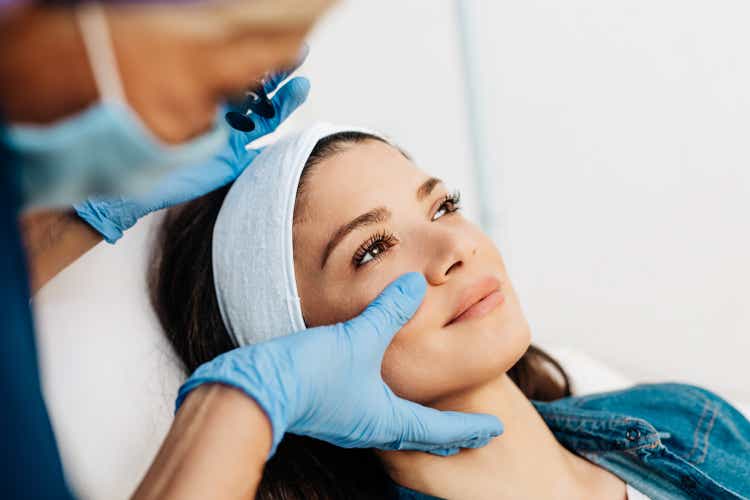 InMode outsources the manufacturing of most products to its tier-one suppliers, such as Flextronics and Medimor, in Israel. InMode owns the proprietary manufacturing equipment and assembly lines from its suppliers. In addition, InMode has gradually acquired ownership from its tier one suppliers; the vertical integration will allow InMode to sustain its 80%+ gross margin.

InMode (NASDAQ:NASDAQ:INMD) is a medical devices technology company based in Israel, which aims to solve the aesthetic customer pain point when choosing the options between plastic surgery and laser treatments. INMD’s sales came from three channels: minimally-invasive surgical/RAFL/SARD, hands-free, and non-invasive laser. InMode has 15 products on the clinical pipelines, the products are expected to be commercialized in the next years.

InMode has a seasoned management team. CEO Moshe Mizrahy was the co-founder of Syneron Medical and has been a serial entrepreneur in the aesthetic industry for decades. CTO Michael Kreindel was the colleague of Mizrahy back in Syneron Medical, who was the pioneer in aesthetic innovations. Kreindel holds numerous patents related to radiofrequency. CMO Dr. Spero Theodorou was a renowned plastic surgeon awarded the MEETH Fellowship, the oldest plastic surgeon training program in the United States. Theodorou is in charge of InMode’s clinical developments.

InMode has an integrated value chain, I will highlight the critical secondary and primary activities that can sustain the growth of INMD in the long run.

InMode owns three distribution centers in Irvine, Toronto, and Yokneam (Israel). The outbound logistics were entirely sourced to the third-party provider, and the shipping is next-day standard. This is a light-asset approach to avoid the fixed cost of logistics, given the current size of InMode.

InMode has a 239 sales and marketing team due to its aesthetic business nature. The track record of S&M shows the importance of marketing through different channels. Traditional marketing to physicians is the focus since the minimally-invasive has growing demand, and physicians want to obtain this capacity. As INMD offers products in more channels, the S&M team will expand beyond the surgeons to ENT, Urologists, and ophthalmologists. Combined with the international expansion, we shall see the number of S&M team increases.

InMode also targets KOLs from different fields to give testimony on InMode’s product. The KOLs are vital; as we see in the launch of Envision, the commercialization relies on KOLs’ guidance. InMode marketing to customers through brand ambassadors such as Paula Abdul, who matches the “beauty standard” of InMode’s target demography.

Under the value chain secondary activities, InMode owns four proprietary platforms in Radiofrequency Assisted Lipolysis (RFAL), Deep Subdermal Fractional RF, EvolveX, and Evoke. The innovations are the cornerstone that built the moat to differentiate InMode from its competitors. RFAL utilized the directional radiofrequency to achieve the shrinkage of face and body skin up to 40% of the total heated volume. Morpheus and other RFALs fill the gap between non-invasive and plastic surgeries. RFALs offer longer-term results than laser treatment while costing less money with less downtime than facelifts. In addition, RFALs have a vital feature of no visible scar, appealing to female clients aged 40-60. This middle-aged population has the highest spending power in the United States.

InMode has an exceptional R&D team to meet the evolving industry standard. According to the 20-F, InMode aims to leverage its R&D pipeline to expand its customer base. Specifically, InMode seeks to develop the next generation of existing product lines, such as the second generation of EvolveX. In addition, InMode targets to expand its current offerings to Dry Eye Treatment, GSM Symptoms, Snoring and Rhinitis Treatments, and Erectile Dysfunction.

According to Canaccord Genuity’s interview with INMD CFO Yair Malca, InMode has a multi-year new technology plan with an average of 2 products launched yearly in the next 3-5 years. Furthermore, InMode has launched Envision, a dry eye treatment platform. Envision is set to be commercialized soon. In the Q2 earnings call, CEO Mizrahy spoke of Envision launch “I believe that if not the end of this year sometime at the beginning of next year they envision will be launched in the United States and then in Europe and Asia.” Envision will bring additional consumable revenue to InMode once it launches.

InMode has had an exceptional 80%+ gross margin in the past three years, contributed by the long-term contracts with suppliers. InMode outsources most of the manufacturing through the third-party supplier Medimor, Flex, and Resonetics. However, InMode built and owned the production equipment, which increased the leverage in the upstream relationship management. Each contract between InMode and the suppliers has a one-year length with an auto-renewal clause. The contract specifies the per unit cost of each production, which allows InMode to have a predefined per unit COGS. Under the inflation environment, the contract terms are beneficial to InMode. In November 2019, InMode acquired 10.34% of Medimor ownership. As the business expands, I believe InMode will consolidate its suppliers and achieve vertical integration.

In the revenue projection, I separate the top-line growth through three channels: minimally-invasive, hands-free, and non-invasive. The total revenue growth of FY22 and FY23 are referred to the analyst consensus from Thomson Eikon with slight adjustments. As highlighted in my investment thesis, the minimally-invasive is determined to become more weighted among the three channels, especially with the launch of Envision.

From Grandview Research, the US non-invasive aesthetic treatment market is projected to grow 13.8% from 2022 to 2030. In the revenue projection, from FY23 to FY26, the non-invasive growth is set at 13.8%.

Hands-free revenue has declined in the past years. With the upgrade of EvolveX coming toward the end of FY22, I think we shall see the sales rebound from FY23. However, there is not enough information to precisely project the growth onward. Therefore, the growth rate of hands-free is set at 5% from FY23 onwards. The EBITDA and EBIT margin projection are based on the historical number and analyst consensus. Since InMode is headquartered in Israel, it enjoys a low tax rate and tax breaks. Thus, the tax rates from FY22 are set in the range of 10%-11%. InMode has little Capex and D&A, which I factored in the model. From the model, InMode will have a consistent FCF margin of 42%+.

I used both perpetuality and EBITDA multiple methods for terminal value. And the two method results in an enterprise value between $3.2 to $3.6 billion.

After adjusting for the net debt, the implied share price is $43 to $49. I applied the average of both as my target price, which is $46.

In the sensitivity analysis, it’s clear that different exit EBITDA multiples and terminal growth rates imply that the current share price of INMD is undervalued.

As mentioned above, InMode outsources most manufacturing through three subcontractors in Israel. The geopolitical uncertainty in the Middle East can pose a danger to InMode’s supply chain. If the relationship between InMode and suppliers breaks, it will significantly impact production. InMode should consider diversifying the output.

InMode’s medical devices are subjected to the approval of the FDA. Any potential delays and rejections from the FDA for the pipeline will impact top-line growth.

As mentioned in the 20F, InMode has a plan to expand internationally. The increase in S&M costs associated with the expansion will have a short-term impact on INMD’s operating margin.

InMode faces competition from Allergan, Venus Concept, Candela Medicals, and many others. It requires InMode to invest more in the R&D effort to invent differentiated products.

InMode has a unique value chain that offers differentiated production, sustains high growth, and keeps the 80%+ gross margin. The minimally-invasive aesthetic market is a blue ocean with great potential for InMode to expand. InMode is still a less-known company, with only five Wall Street firms currently covering the stock. As Israeli company gains popularity, more and more investors will start researching INMD. I believe InMode is a buy with a target price of $46, or a 40% upside.

9 in 10 agree that investing is best strategy to protect wealth as inflation tops...

How to Transcribe an Audio File in Microsoft Word