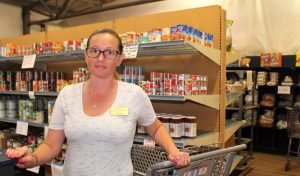 Suzanne Horne a volunteer from Members First Credit Union loads meat into a cooler for a client of the Box Elder Community Pantry on Wednesday Sept. 21, 2022.

BRIGHAM CITY – The steep rise in gas, food and rent has thrown the U.S. inflation rate to 9.1 percent in June, a 40 year high and causing more consumers to tighten their belts. Some are making lifestyle changes just to stay afloat.

Linda is a Brigham City resident who was willing to talk about her struggles brought on by inflation.

Not only did Linda have to go to the Box Elder Community Pantry to get food, she also had to move in with her son’s family because the cost of everything has gone up so much. She lost three jobs and COVID-19 made it impossible for her to afford to live on her own.

She is not the only one struggling. Other Utahns are facing the highest inflation rate in 40 years making it more difficult to afford life’s essentials.

“I don’t want you to use my name, I’m too embarrassed that I have to move in with my kids for help,” the 72-year-old said. “From the time I was in high school I’ve always worked.”

Linda has two boys, both married with families, and now because of the economy and her hardships she is moving in with her son and his family. The son’s family is having a hard time, too.

“Things got tight.” Linda said. “I was working in 2020 at a job I had for five years then I got COVID and it took a little longer than I wanted to get back to so they let me go.”

Even though she was vaccinated twice she got COVID again. After her third time getting the virus, she was considered a long hauler and resigned to live off her Social Security.

“It’s tough to live on my Social Security alone when groceries have gone up so much,” she said. “With car payments and gas prices, who can afford rent?”

Linda said moving in with her son is the only thing she could do.

“The current economy is outrageous; food prices are out of control,” she said. “It’s hard to come up with money for food which is out of sight. The cost of everything is putting me further behind.”

David, also from Brigham City, was picking up his food order from the Box Elder Community Food Pantry Tuesday afternoon.

He lost his wife last December. He and his wife were on disability and when she died, he lost half of his income.

He is feeling much of the same things that Linda is.

“Gas and groceries are more expensive,” he said. “Without help from the food pantry I’m not sure I could make it.”

Coleen Groberg, the executive director of the Box Elder Community Pantry, said there are more than these two who are struggling. More middle-income families are needing help.

Despite the struggles of so many, Groberg is seeing the generosity of the community as they bring in more canned goods.

“We are seeing a lot of people cleaning out their cupboards and bringing their outdated canned goods to us,” she said. “People are in need but if the food is outdated and your own family won’t eat it, don’t bring it to us.”

The food pantry has United States Department of Agriculture guidelines they must follow.

“It is a fine line. We want donations and people are having a hard time,” Groberg said. “But some of the food being donated is out date and we have guidelines that say we can’t use out of date canned food.”

The Food Pantry recognizes there is a need and right now more families are coming in looking for help.

“I wish they would raise income guidelines,” Groberg said. “It is hard to tell people no when they don’t qualify for help because they make too much or too little money.”

She wants to help as many families as she can.

“The numbers look good, but a person can make over $2000,” Groberg said. “But if you are paying, rent, utilities, car, food and gas, it goes pretty quick.”

She received new income guidelines in July and it’s still crazy not being able to help more people.

“When you have to spend more money on milk and eggs and other groceries and housing, you have choose between housing and eating,” he said. “We are seeing more middle-class families than we have seen in the past.”

The focus of the pantry was to the less fortunate, but middle class wages haven’t improved much lately and some are really struggling.

“We have been seeing new families and older people that have never used us before and didn’t know we existed,” Whitaker said.  “Some are right on the verge, both parents are working and they either under-qualify or over-qualify,” he said. “It’s not all that different from many of us, we are all struggling.”

The pantry is also seeing an increase in retired people on fixed incomes looking for relief. Some are making less than $1,000 a month and have to move in with family.

“Because a lot of the elderly have never needed help before they are facing a new reality,” Whitaker said. “It’s strange what is happening. I recognize there is a need and there is an issue.”

Emily Lamb of Lending Tree said between rising rental costs and steady inflation, more and more people are worried about losing their home.

“We found that 35 percent of people in Utah behind on rent are worried they will be evicted,” she said. “We have a detailed report on foreclosure and eviction fears, how many people are behind on payments and why women and people of color are more at risk of losing their home.”

That committee concluded Utah families are experiencing a rise in monthly inflation costing them up to $910 in July. Even if prices stop increasing altogether, inflation will cost households in the Beehive State up to $10,917 over the next year.

Stores, gas stations, and food distribution centers that are open

Nasdaq Bear Market: 3 High-Yield Dividend Stocks That Can Double Your Money by 2026

How Elon Musk, SpaceX, and T-Mobile are helping the satellite-to-cellular business

Is Cryptocurrency Part of the Overall Future of Money?