HyperX has long been a favorite brand for me when I’m on the hunt for new gaming hardware. Having been introduced when I picked up my first actual gaming headset, the HyperX Cloud Core, it quickly became evident to me that quality was no joke to this company, both in audio quality and how they build their products. The most recent addition to my HyperX collection is no different. The HyperX QuadCast S microphone is a USB condenser microphone that both looks and sounds amazing, and I’m going to break it down here for you.

First off, cheers to HyperX for how they package their products in a way that keeps it safe and secure until you’re able to get it home. Working in retail I’ve seen pretty questionable packaging that left the hardware vulnerable if it were dropped or if the box were to be punctured accidentally, but there’s no fear of that happening here.

Inside the box you’ll find the QuadCast S microphone already attached to the desktop stand for a quick and easy setup, but if you prefer to have it on a mic arm they’ve included an attachment for that as well. You’ll also find the USB-A to USB-C cable to hook it up to your PC as well as a simple guide. The guide is really only there to help you identify the different features, but if you do need a more detailed description you have to hop on the HyperX website.

Setup of your new microphone really is as easy as plugging it in. The microphone was immediately picked up as my new default for Discord and OBS. I hopped into some games of Overwatch 2 with my sister and she commented right away on the microphone’s improved clarity and overall quality over the microphone I had been using previously (a simple Atrix microphone that I had picked up at GameStop). There are a couple different ways to check the audio quality for yourself; you can plug a headset directly into the microphone or you can go the recording route. After listening to some playbacks myself, I can definitely testify to the quality of the audio this thing captures, and with minimal background noise.

The QuadCast S comes with the usual 4 polar patterns to cater to your specific needs, whether it be streaming, recording for a video, doing a podcast, or even just to chat in game. You’re able to easily switch between each of these patterns with the simple turn of a dial on the back of the microphone and then you can also make adjustments to the mic sensitivity by rotating the bottom of the microphone. This part came in handy when trying to reduce how much of my keyboard was getting picked up as the mic is positioned directly above it. If you have those super clicky keys on your keyboard, you may want to drop the sensitivity down a little more so that it’s not distracting to your team or others on a voice call. A pop filter has also been built into the microphone to help block plosive sounds.

The HyperX QuadCast S comes in black or white. I got to check out the white version, which looks clean with the ROCCAT mouse I reviewed previously. Now I just need a white keyboard to complete the setup. Of course, this wouldn’t be a real gaming microphone if it didn’t also have RGB, although there is an option for the black microphone to get a simple HyperX signature red LED. You can customize the color and light pattern through the HyperX NGENUITY software as well as how bright it is and how fast colors change. Mic monitoring and volume are also able to be adjusted through NGENUITY and you will also find brief descriptions for each of the polar patterns if you aren’t familiar with them, like myself. 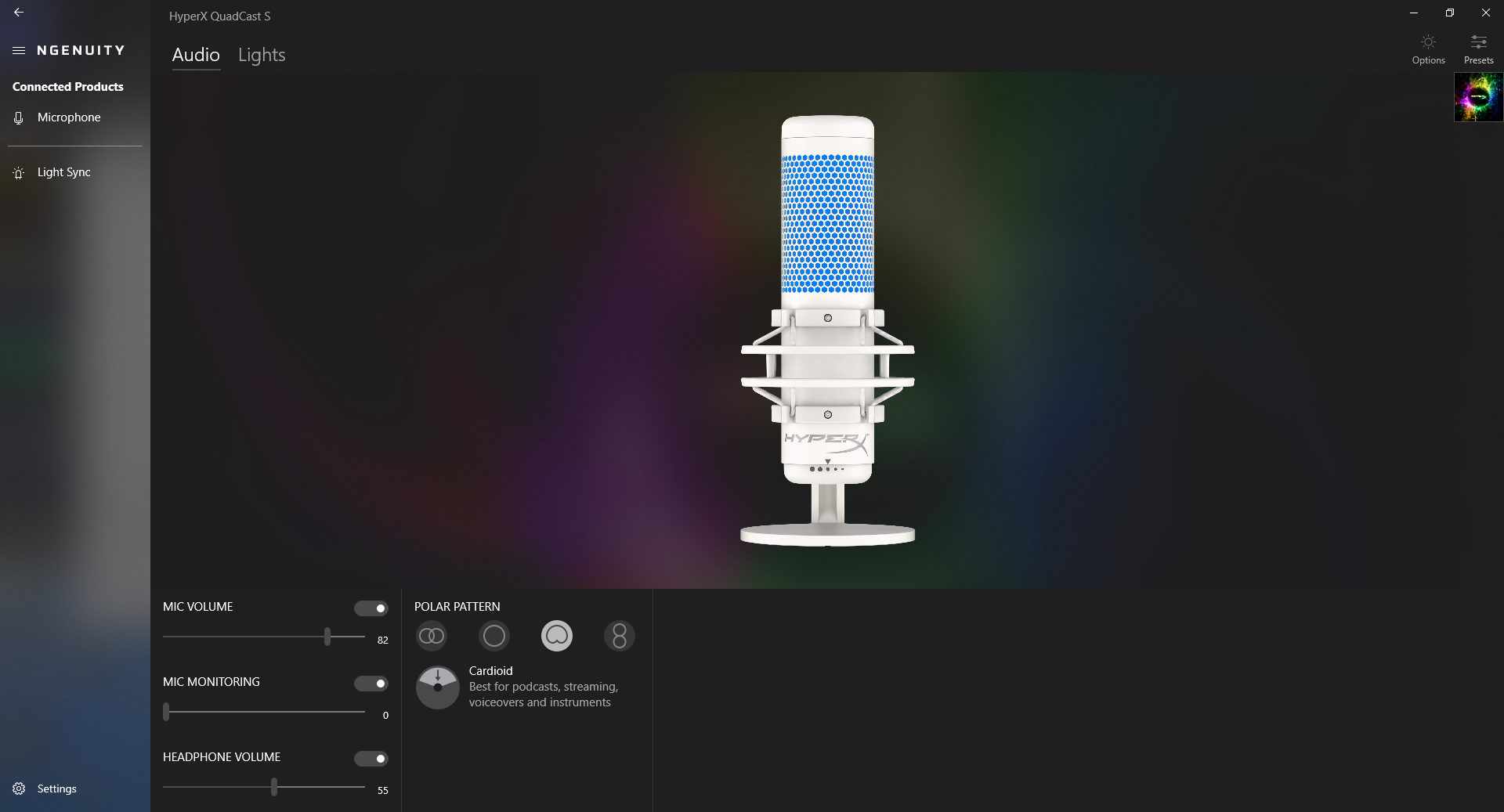 We’ve all seen it happen, or rather we’ve all heard it happen, the inevitable mic slip where they thought they were muted but they actually weren’t, and now the whole lobby knows who the imposter is. Well, you won’t have to worry about being sussed out by the homies anymore. With a simple tap to the top of the microphone, you can easily mute and unmute your microphone. The LED will also turn off when muted so there should be no mistaking whether or not you can be heard.

With all the different options for broadcasting software available, you’ll be pleased to know that this microphone is immediately compatible with OBS Studio, Streamlabs OBS, and XSplit. But compatibility doesn’t stop there. You’re also able to use the QuadCast S on Mac as well as PlayStation consoles. To top it all off, rest assured that you’ll be covered in the event of any issues with your microphone with HyperX’s 2-year warranty.

I’m not going to lie, I didn’t have a single gripe about this microphone. The only issue I did have was trying to take it off the desktop stand so I could attach it to the mic arm, but after that was figured out everything else fell into place and I haven’t had any other issues with it. It’s sleek and it’s simple, which is just what this PC noob needs. Compared to the similarly featured Yeti Blackout microphone, it is a little higher on the price at $159.99, but I feel the cost is well worth it.

Cassie Peterson is an Editor for Gaming Trend but also a sporadic content creator and exceedingly average Rainbow Six Siege player. She goes by MzPanik on Twitter and Twitch and all of the gaming platforms.

See below for our list of partners and affiliates: