Home Lifestyle Music How to Connect Last.fm to Apple Music 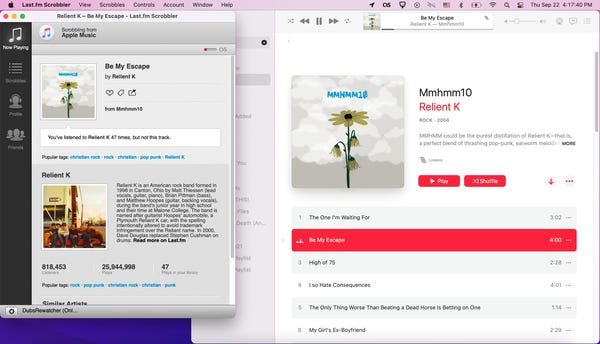 
Historically, Last.fm and Apple Music have never worked well together. Unlike Spotify, there’s no universal way to connect your Last.fm account to Apple Music and track everything you listen to at any time.

But things have gotten better over the last few years. Now, you can scrobble your Apple Music tracks to Last.fm from a Mac, PC, or iOS/iPadOS device — you just need to download some apps.

Quick tip: There isn’t currently a way to scrobble Apple Music on Android.

How to connect Last.fm to Apple Music on Mac or PC

Instead of directly connecting your Last.fm account with your Apple Music account, you’ll need to connect the Last.fm app to your computer. This will make it so anything you play in the Music app (Mac) or iTunes (PC) will automatically scrobble to Last.fm.

1. On your Mac or PC, head to the Last.fm website’s “Track My Music” page.

3. Download the Last.fm app and install it, then open it.

4. When prompted, connect the app to your Last.fm account. Depending on your system, you might also need to give the app permission to read what music your computer is playing.

5. If you’re on a PC, click the Last.fm icon in the taskbar at the bottom of your screen, then Settings. In the pop-up that appears, make sure that iTunes has a checkmark next to it.

Anything that you listen to in the Music app or iTunes should now automatically scrobble to Last.fm. If you open the Last.fm app while listening, it’ll tell you exactly what’s playing — the Mac app will even tell you how many times you’ve listened to that specific artist and song.

Important: If you listen to Apple Music using the online web player instead of the app, check out the Last.fm Web Scrobbler instead. This is a free extension that works with Google Chrome, Microsoft Edge, Firefox, and Opera, and will track everything you listen to through the Apple Music web player.

How to connect Last.fm to Apple Music on iPhone or iPad

There is an official Last.fm app for iOS/iPadOS, but it doesn’t work very well with Apple Music. To properly scrobble Apple Music with that app, you need to manually open the app and press a button every so often.

Instead, you’ll want to use a third-party app like Soor or Marvis Pro. These are alternative music apps that let you view and play your Apple Music library, and will scrobble to Last.fm while you do so.

Unfortunately, neither app is free. Soor costs $6.99, while Marvis Pro is $7.99. You’ll also need to make sure that you listen to Apple Music through those apps, not the default Music app, if you want to scrobble your music.

But both apps automatically scrobble your music instead of making you press an extra button, making them much better for constant Last.fm music tracking.

William Antonelli (he/she/they) is a writer, editor, and organizer based in New York City. As a founding member of the Reference team, he helped grow Tech Reference (now part of Insider Reviews) from humble beginnings into a juggernaut that attracts over 20 million visits a month.
Outside of Insider, his writing has appeared in publications like Polygon, The Outline, Kotaku, and more. He’s also a go-to source for tech analysis on channels like Newsy, Cheddar, and NewsNation.
You can find him on Twitter @DubsRewatcher, or reach him by email at [email protected]

When Music Is Violence | The New Yorker