Streaming service takes in 5.1 PCM audio and outputs it as both DD+5.1 and stereo AAC

Jan. 17 marked yet another in a string of streamed-sports firsts: HBO Max live-streamed its first-ever sports event, when the U.S. Women’s Soccer National Team visited the New Zealand team, the 2023 FIFA Women’s World Cup co-host. On screen, it may have looked like a typical soccer match, but, under the hood, it was a new kind of workflow, and the event’s audio provides a glimpse into the future.

“It was a unique night, in the sense that we were taking stems from New Zealand and mixing them in Atlanta at our Techwood Campus facility there,” says Neal Roberts, senior director, live experiences, Warner Bros. Discovery Sports (WBD Sports). “The promos, bumpers, and all those elements came in from Techwood as well. Then we fed PCM audio through to our broadcast plant and into our contribution encoder, where we took a 5.1 mix in PCM, and output that as both DD+5.1 and stereo AAC. It was not upmixed at any point — even our bumpers and promos and studio shots. Everything was natively 5.1 end to end.”

Whereas much of sports streaming takes audio feeds from the broadcast and simply distributes them via various online channels, the HBO Max production took a different approach. Not surprisingly, there were some challenges, a key one being endemic to the streaming universe. 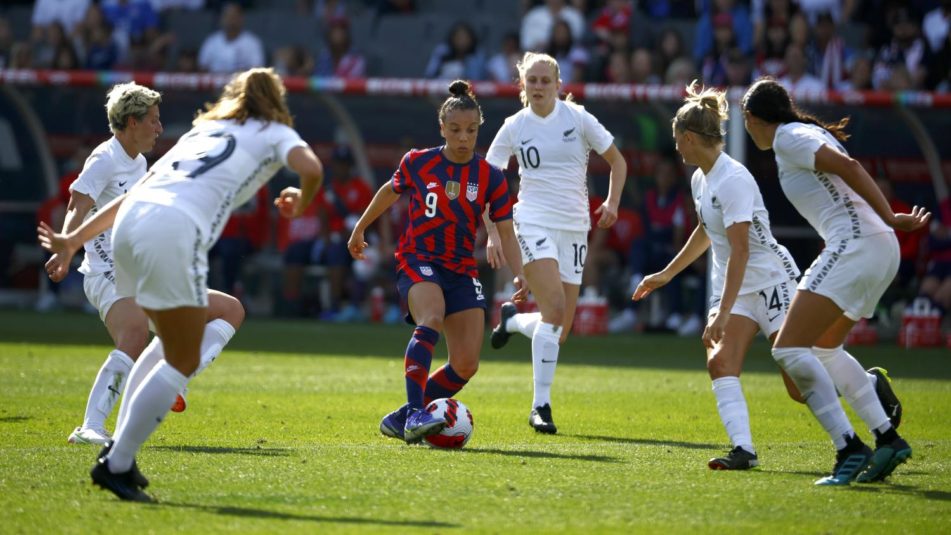 “There are always challenges when you don’t necessarily own the end device in the consumer home,” says Roberts. “[With] a linear service, the MVPD owns that box, whether it’s a satellite distributor or a cable distributor. They own that set-top box, they own the encoder, they own the pipe between them. We’re challenged on our side of the industry for direct-to-consumer: we’re running software through an app on a box or a television, like a Roku or an Android device or an Apple device, with a mobile device or connected to a lean-back device in the home, but don’t own the HDMI that’s connected to the TV. We certainly don’t own the glass, we certainly don’t own the DVR or the soundbar, and we certainly also don’t own, nor can we control, the settings that the user could change on a device like a Roku.

“We have to work very closely with our support team to ask the right questions and also do regression testing,” he continues. “If a manifest [streaming-parameter documentation, such as bitrates, etc.] is not correct, the device could potentially pick the wrong codec. Yes, it’s complex, but, as long as your manifests are built properly, you’re going to deliver a premium experience.”

The infrastructure already built into the streaming environment, he adds, is helping ameliorate navigating the increasingly dense consumer end of online content, automatically interrogating home endpoints through HBO Max’s own digital infrastructure, which was already in place for the online network’s premium-content delivery.

“Even though it was our first live broadcast in the U.S.,” he continues, “we were able to leverage the tools that already existed within the application without having [to do] any development work on that side of the chain. There certainly were things upstream in the broadcast plant that we had to confirm because it was the first time we’ve ever delivered 5.1 OTT or digital. Of course, Turner Sports has been delivering 5.1 through traditional linear pay TV for a long time but never through an OTT service.”

Like many audio supervisors, Roberts had an ad hoc group of about 50 colleagues scattered around the country, assembled via a video bridge to monitor the streamcast and listen for audio quality throughout the entire event. The network’s own QC and QA teams participated, and some Dolby Labs folks were monitoring through DP580 reference decoders. They had a lot to be aware of: this was HBO Max’s first live 1080p/60 stream.

“There were a lot of things we did new that we needed to make sure were robust,” he says. “Making sure we’re seeing meters move and audio’s coming out of the right speakers, and is my Apple TV getting AAC or Dolby Digital+ or is it getting only AAC and is there a problem? Fortunately, we didn’t have problems with codec selections.”

HBO Max is capable of delivering Dolby’s Atmos format today, but HDR will take a bit longer. Given how often the two formats are linked in linear delivery, Roberts says, he’s holding off on them for sports at the moment.

“Our particular approach will be to deliver HDR either through an upmap or natively when we’re ready,” he says. “We’re not, but, in the meantime, we are agnostic from video format to audio format: we will tie Atmos to HD with or without HDR in order to deliver a more premium experience anywhere.”

Roberts adds that the match was also the occasion for the inclusion of live closed captions for the first time via HBO Max.

A Future To Look Forward To

The success of HBO Max’s first live-streamed sports event suggests that the idea will evolve quickly. According to Roberts, the team is already testing various Atmos configurations, including live upmixing of stereo and surround mixes. A follow-up match between the U.S. and New Zealand was scheduled on Jan 20. Meanwhile, Atmos implementation remains the most immediate audio goal.

“Today, we’re not delivering anything beyond DD+ 5.1,” he says. “We do have some work to do internally to be able to get that Atmos signal through our broadcast plant, but it is on our roadmap, and we’re excited about it. We actively test some sort of Atmos device internally during every event we do and fully expect to deliver Atmos through to the consumer at some point. I don’t have a timeline or an exact date for that, but folks should certainly keep their ears open for the additional channels coming through. It’s a nice future to look forward to.”