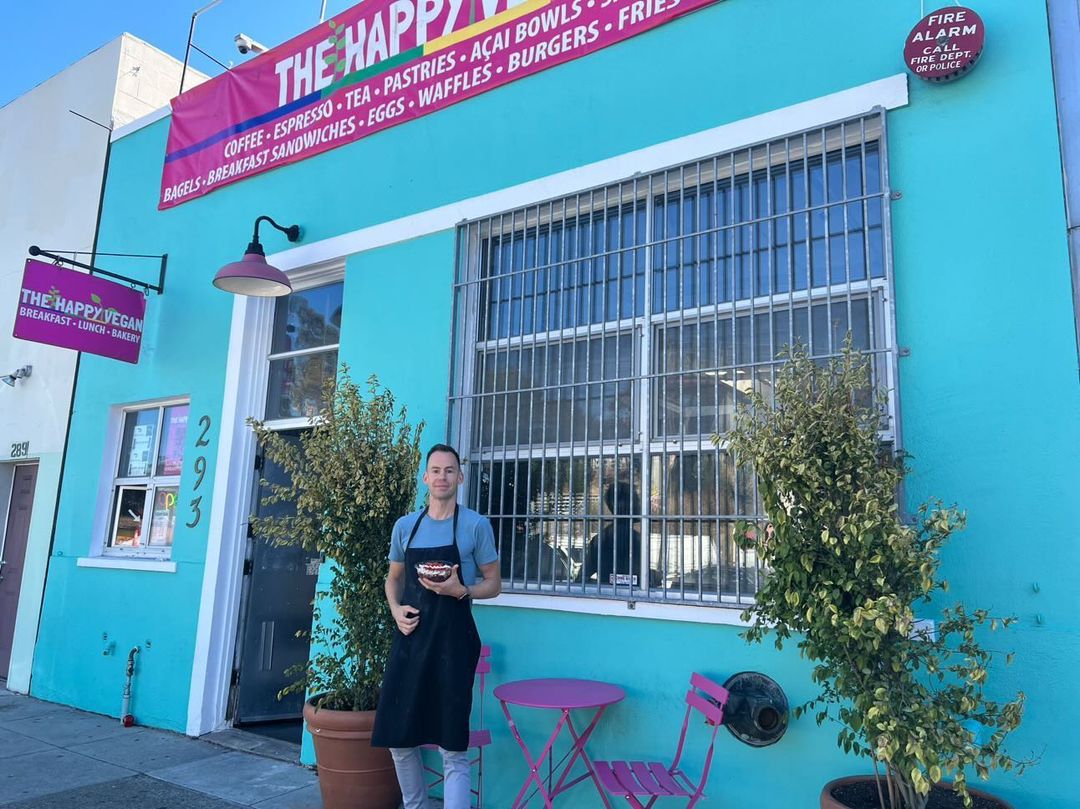 
There’s a new-ish bakery and comfort foods supplier in the Bayview, and this one is all gluten-free and vegan. The Happy Vegan Bakery and Cafe, run by Tobias Patella, dishes up shockingly tasty-looking dishes, given the myriad of allergies he’s accounting for. The shop offers everything from spicy chicken sandwiches slathered in coleslaw to hashbrown-stuffed bagel sandwiches to strawberry muffins that look positively gluten-filled (but, somehow, are not).

Patella moved from Southern California to work in tech consulting before finding the work a bit soulless. He pivoted into retailing trail mix and granola, launching his business BetterFoods in 2016. Once he moved up here, though, he realized there was a lot of potential for his location at 293 Bayshore Boulevard (coincidentally next door to San Francisco’s oldest restaurant, aptly named the Old Clam House). “It’s a huge commercial kitchen, and we wanted to figure a way to better utilize the space,” Patella says. “My dream was always to offer freshly made food directly to consumers.” He kicked off Happy Vegan during the pandemic, offering his goods exclusively through DoorDash and Uber Eats.

The outlet started off with pastries like doughnuts and cupcakes, but within a couple of months the menu expanded into renditions on chicken and waffles, omelets, and sandwiches. A year-and-a-half later, the location feels like it’s a part of the Bayview’s small business network. SFGATE gave praise to the tangy zing in Patella’s cheesecake, and a round of applause to offering gluten-free and vegan doughnuts in a city lacking allergen-friendly doughnuts. Abanico Coffee is the roaster of choice, and Patella notes his espresso drinks and tea offerings are as good as anything you can get at Starbucks. “I’m so glad to use their coffee. It’s amazing,” Patella says.

For Patella, his move into veganism three years ago was about the environment. There was no specific moment, no inciting incident, just a gradual observation of how his body reacted to animal products and the burgeoning research of meat and dairy’s impact on the planet. “I want to offer something sustainable for the planet and for our health,” Patella says. That’s the same reason all the to-go materials are 100 percent compostable, as well.

He runs the business all on his own, but once he can, he’d like to expand into indoor seating in the future. Already he’s in talks to get his goodies placed with local cafes. Ultimately, expanding both of his businesses — but especially the fresh, planet-friendly treats he’s whipping up with Happy Vegan — is how he wants to make his imprint in San Francisco and the neighborhood. “A lot of people have said they’re happy to have a new, healthy option on the block,” Patella says. “The neighborhood has challenges, but a lot of people who live around here say they’re happy to have new options for food.”

How Do You Define Healthy Food?

Opinion: Regardless of Politics, the Leak of California Gun Owners’ Personal Data Was Wrong

What trip? The Ron DeSantis Round Up email to supporters omits Martha’s Vineyard