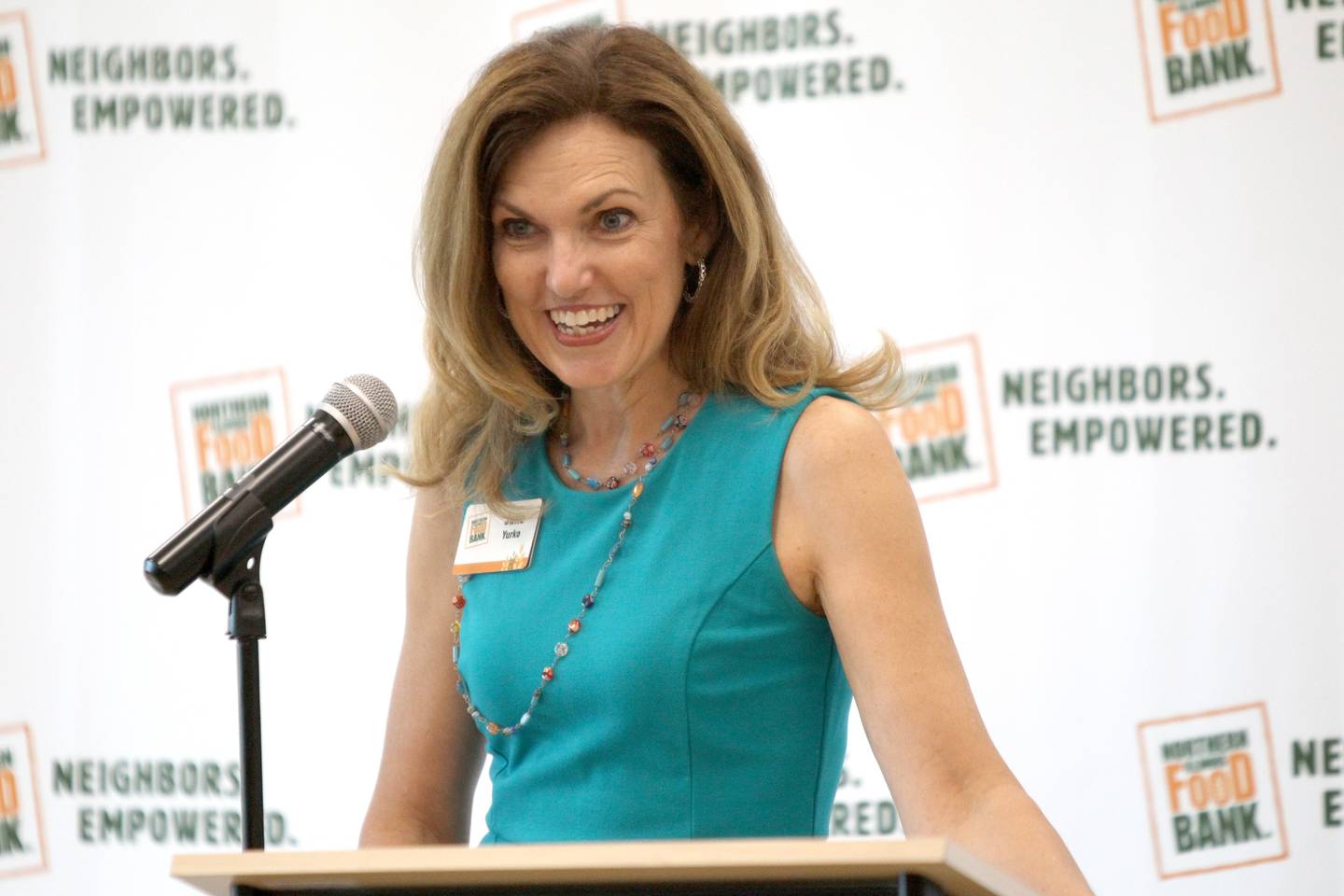 
GENEVA – The table was piled high with food – cans of black beans, a gallon of milk, a bag of rice, a carton of eggs, a fresh cantaloupe, a bag of pancake mix.

All would packed into boxes and delivered – free – through an unexpected but welcome partnership between the Northern Illinois Food Bank and Project DASH – of DoorDash.

Since May 2021, Project DASH made 40,000 free deliveries of food throughout the region to Northern Illinois Food Bank clients.

At a news conference Friday in Geneva, food bank and DoorDash officials and State Reps. Tom Demmer, R-Dixon, Maura Hirschauer, D-Batavia and Anna Moeller, D-Elgin, marked the Food Bank’s Day of Service by highlighting the partnership and the goodwill – as well as the food – that free delivery brings to families in need.

“When we connect with our neighbors needing help and we give them that news that they can get the help that they need and want, they are empowered,” said Julie Yurko, Northern Illinois Food Bank president and CEO. She spoke to a small crowd in one of the food bank’s meeting rooms. “It was so surreal that this partner was coming to us and giving us this gift of free delivery. … We are celebrating 40,000 free deliveries by DoorDash.”

The food bank’s vision is not just providing free food, but removing the stigma of asking for help for those in need, she said, and now Project DASH is delivering that food free as well.

Not everyone in need has a car or a means to travel to pick up their food, she said. Even though it’s easier to choose what they want through the food bank’s online service, My Pantry Express, those in need had to find someone to take them to a convenient pickup area.

‘It was a game-changer’

But for someone identified only as Kevin, Yurko said, none of it was easy.

Kevin had been injured at his job, so he now used a wheelchair and relied only on a fixed income. He had to ask neighbors to go to a local Walmart to pick up his food and bring it to him in his apartment building, Yurko said.

“He talked about how hard it was, first to ask his neighbors to help him, and sometimes to get out of the apartment, get in the car and go to the Walmart to pick up the food,” Yurko said. “He said when DoorDash delivery became available, it was a game-changer. He told me he appreciated it so much – not only that he could get the food that he needed and wanted, but to have it delivered to him for free. He talked a lot about being valued, about being seen, understood … because of the partnership with DoorDash.”

The delivery people – known as dashers – echoed what Yurko said of the process: “It’s the best part of my week” when delivering for the food pantry.

Government Relations Manager of DoorDash Alexi Madon detailed the issues that can lead to needing food support – such as illness or job loss – and more recently being impacted by inflation and the Covid pandemic.

DoorDash uses its technology in the logistics of food deliveries for the food bank, which also three other locations in northern Illinois – Rockford, Joliet and Lake Forest – to increase food access for those in need, Madon said.

“Local deliveries’ transformational solution … (enabled) these food banks … to get food to families in this state in a safe and reliable and efficient way,” Madon said. “With the help of our national community, Project DASH has empowered 2 million deliveries of 35 million meals nationwide and 40,000 of those are right here in the northern Illinois region.”

Demmer said food insecurity is a challenge in all areas – rural, suburban and urban – which also reflects the diversity in Lee, Ogle and DeKalb counties, in the 90th District that he represents.

“Meeting the needs of individuals suffering from food insecurity in those different areas require different strategies. They require a different mindset,” Demmer said. “But one of the most impressive things about the food bank and our local food pantries has been the innovation, the outside-the-box thinking, the can-do spirit that says, ‘Let’s meet these challenges where they are. Let’s try to meet the needs of the community the best way we can.’”

Especially now, Demmer said, when food prices are rising and families and individuals find themselves unable to access high quality foods in their communities, the work of the food banks and pantries are ever more important.

Partnerships are important to these efforts, Demmer said, starting with local volunteers, local organizations – and in this case – the partnership with a nationally known names like DoorDash “that can bring the resources of a large network and integrated network to bear in our communities and our neighborhoods.”

Hirschauer, whose 49th District includes parts or all of Elgin, South Elgin, Bartlett, Wayne, Geneva, West Chicago, Batavia, Winfield, Aurora and Naperville, said she could see that volunteers were already at work at the Geneva facility.

“I want to give a shout out for volunteers, and the new volunteers – the Dashers – who really make this all work,” Hirschauer said.

“September is Hunger Action Month,” Hirschauer said. “But hunger affects members of our community day in and day out, year after year. So many of our neighbors are just one missed paycheck, one job loss, or medical emergency away from hunger. Far too often, families have to choose between keeping food on the table or keeping the lights on or rent or health care.”

Moeller, whose 43rd District represents most of Elgin, Carpentersville and surrounding communities, said during her years in office, she has worked with Food for Greater Elgin, which receives its food to distribute from the Northern Illinois Food Bank.

“As a volunteer with the organization and as an elected official, I’ve seen the need grow over the past several years,” Moeller said. “And the need for customers to be able to access food in a dignified way and a respectful way.”

Food pantries have tried to operate in innovative ways, setting up so that it seems like a shopping experience or having their own volunteers deliver food, Moeller said.

“But having this new option of being able to order online and use a nationally-recognized food delivery service … is a huge innovation that needs to be celebrated,” Moeller said.

“We wish we didn’t have to have organizations like this, right?” Moeller said. “We wish that everybody could be able to afford food on a regular basis and not have to make the decisions between paying rent or keeping the lights on or paying the medical bills and food. But until we get to that point, where everyone has resources they need to feed their families, organizations like this are so important.”

The FDA Finally Has a Definition for ‘Healthy’ Food

The Delta Terminal Will Soon Have the Best Food at LAX, Full Stop

How to Thaw Frozen Food the Right Way

China’s government published a catalog of algorithms from 30 tech firms including TikTok’s owner —...