A Florida man is on a mission to help his local community and his alma mater through food.

Gabriel Lovett, a Florida A&M University alum and owner of Tasty Love food truck in Tallahassee, told “Good Morning America” he’s been around cooking his whole life and recently discovered a way to pair his passion with philanthropy.

“I had nothing but cooking jobs going through my adolescence,” Lovett told “GMA,” adding that he decided to take his culinary passion seriously in 2018. “I saw the Southside of Tallahassee needed more food options with a millennial twist.” 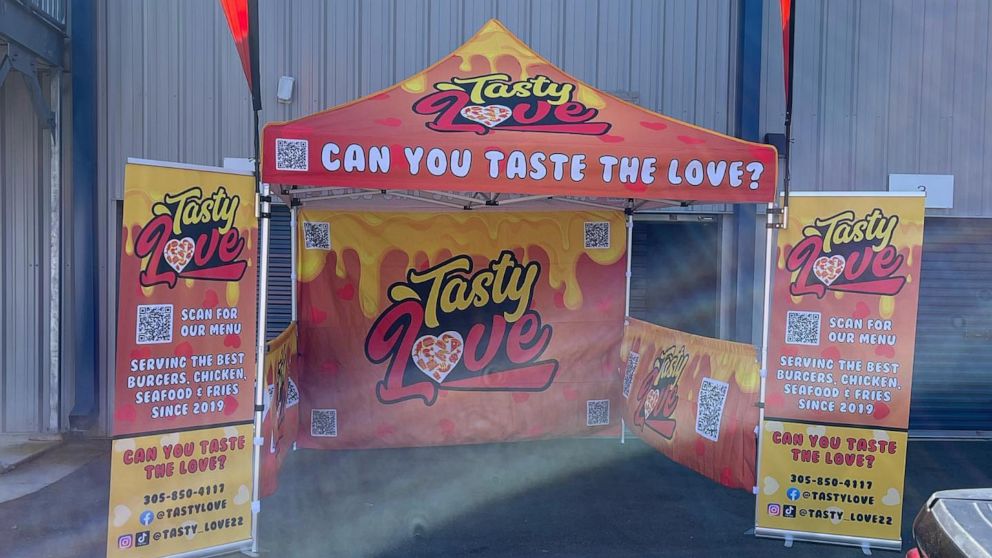 A pop-up event for Tasty Love in Tallahassee, Florida.

After forgoing a grand opening in October, Lovett said, “I decided to combine my grand opening with my 27th birthday and instead of going on a trip or out of country, I’d start a scholarship to give back to my alumni and focus on people who are actively involved in the community and school and also the ones who are struggling but are not giving up and doing all they can do.”

“It feels great because I did a lot of reaching out, and a lot of doors was closed, but I never lost hope and kept at it until my dreams came into reality,” Lovett told “GMA.” “In 2019 I use to write down, ‘I will have a food truck.’ And two years later, I got it.”

Lovett funded the scholarship with earnings from his business and promoted the scholarship opportunity on social media. He posted the requirements, which state that those applying need a “2.5 GPA or higher and for all applicants to submit a 45 second video telling my committee how this scholarship will benefit them.”

The inaugural recipient “was heavily active on FAMU campus, involved in numerous organizations [and] volunteering,” Lovett said. “I know that when [someone’s] heavily involved, your time is not that much when it comes to get getting a job, so I felt I could be a blessing to her for her hard work.”

Lovett said he first followed the urge to cook professionally during his senior year, eventually opening Lovett’s Kitchen from his home and serving an average of 70 customers per day. Following a transition from an at-home operation to a commercial kitchen in a nearby mall, Lovett admitted he “lost focus” and shut down shortly after Memorial Day weekend.

In an effort to improve and reach success, Lovett told “GMA” he enrolled in a management class after that “to learn how to properly run a business” and reemerged with a food truck and a new name.

Lovett plans to announce the second scholarship “around homecoming for FAMU for fall semester” and will aim to give one scholarship to one student per semester moving forward.

“I know my little seed of an idea will be fruitful and I plan on doing it two times a year to show my appreciation and show that as a community we can and will help and give back,” Lovett said.