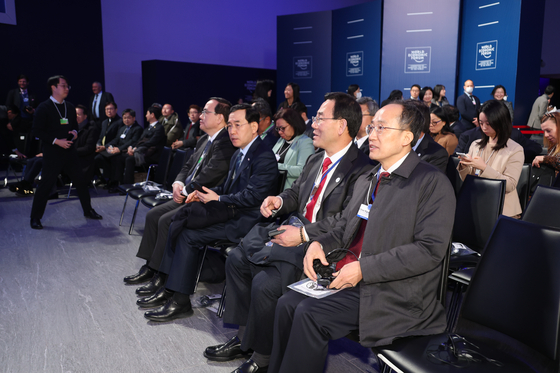 Choo made the remark during a session co-hosted by the World Economic Forum in Davos, Switzerland, on Thursday, underscoring the importance of building an investor-friendly market environment, according to the Ministry of Economy and Finance.

To this end, Choo said Korea will seek to abolish the registration system for foreigners, in which they are required to file personal information to the Financial Supervisory Service before purchasing listed Korean stocks.

Currently, Korean securities and foreign exchange markets run from 9:00 a.m. to 3:30 p.m. Earlier this month, the finance minister hinted the trading hours could be extended to 2:00 a.m., beginning as early as the second half of 2024.

The WGBI, operated by FTSE Russell, is a broad index designed to measure the performance of government bond markets, including local currencies and sovereign bonds of major advanced nations.

Choo met Lieve Mostrey, the head of Euroclear, a major international central securities depository, to discuss possible cooperation amid Korea’s efforts to be included in the WGBI.

The finance minister suggested that Asia’s No. 4 economy is expected to post an annual current account surplus of 24 trillion won ($20 billion) for this year.