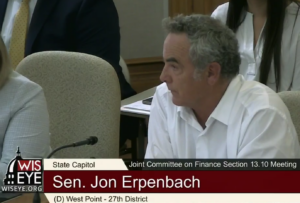 
A three-week squabble over how the state should spend its first $31 million payment from litigation against the opiate industry ended Thursday as the Legislature’s budget committee approved a revised plan for using  the money to combat the state’s opioid addiction crisis.

Republicans on the Joint Finance Committee rewrote a plan originally drafted by the state Department of Health Services (DHS), adding requirements to send some of the money to county sheriff departments and other local law enforcement agencies. And it added new provisions directing some of the funds to programs at  specific organizations — without naming them.

To make up for those changes, the revised plan eliminates one proposed drug abuse prevention program as well as a proposed program to support families or close associates of people who abuse drugs.

The elimination of the families program brought an anguished response from Sen. Jon Erpenbach — and a personal disclosure about his own connection to the opioid epidemic: that his adult daughter lives with addiction.

“Families don’t know where to go. And families need that,” he said. When the original DHS proposal came out with the support program, “I thought it was a great idea.”

Erpenbach, who will leave the Senate at the end of this year, urged lawmakers to revisit the concept in the future, and to take a bipartisan approach.

“I’m done,” he said. “But you guys will be around. Look into this. Because the more rural you are in this state, the tougher it is to get answers.”

The finance committee passed the revised plan unanimously — but only after Republicans sniped at Gov. Tony Evers and DHS while Democrats expressed frustration at what had been taken out of the original spending plan. Democrats tried to pass the original plan without changes; that failed on a 4-12 party-line vote.

The $31 million that Wisconsin is due to receive by the end of this year comes from a settlement reached in February 2022 in the National Prescription Opiate Litigation, a massive lawsuit brought by local governments and other plaintiffs. The defendants include manufacturers, distributors and retailers who sold opioid drugs that have produced a spiraling addiction crisis across the country.

While 70% of Wisconsin’s share of the settlement money goes directly to local and county governments, 30% goes to the state. The money that Wisconsin is supposed to collect this year is only a fraction of the total amount that may yet be distributed from that lawsuit as well as others that are still pending.

Wisconsin Act 57, enacted in 2021 before the settlement was reached, directs the state’s 30% of the settlement money to DHS, which must submit a proposal on how it will spend the funds. Under the law, the Joint Finance Committee can block the spending plan if just one member objects to it within 14 working days of receiving it.

An early draft this spring was rejected because it was drawn up before the state knew how much money it would receive. DHS submitted a revised plan July 28. The finance committee’s Republican co-chairs announced Aug. 17 that it had been blocked and that they would revise the proposal.

They produced that revision on Thursday.

The Republican revision keeps both items, and adds a requirement for DHS to “prioritize distribution to law enforcement agencies and first responders” for both.

DHS is testing changes in the alert system in 15 counties that enable it to detect overdoses in close to real time and would expand that to other counties. The finance committee plan adds language authorizing DHS to use the money to upgrade the prescription drug monitoring program.

The plan also requires that private schools share in what remains of the curriculum funding.

“How many school districts will receive grants that will actually allow them to succeed with that amount of money in the allocation?” asked Rep. Beth Meyers (D-Bayfield) of Bob Lang, the Legislative Fiscal Bureau director.

Lang said that could not be determined yet. “I just don’t know how many will actually apply,” he said.

The revision drawn up by Republicans cuts that by $1 million. It also adds provisions that direct how DHS spends some of the remaining $10 million.

The plan now requires the department to allocate an unspecified amount of funding to “support the expansion of available beds for treatment of pregnant and postpartum women in a family-centered treatment environment.”

While the language doesn’t name a recipient, it appears to have been drafted to direct funds to Meta House, a Milwaukee drug treatment agency that serves women with residential as well as outpatient programs.

At a news conference Thursday where the Republican leaders of the finance committee previewed their changes, Rep. Jessie Rodriguez (R-Oak Creek) praised the GOP plan and also Meta House, which she said she was scheduled to tour on Friday.

“By providing funding for their expansion, we will support Meta house to carry out their shovel-ready plan to double the capacity of their inpatient program and further build on their programs to provide support and promote long-lasting recovery,” Rodriguez said.

Carryn Sami, Meta House director of development, told the Wisconsin Examiner that the organization couldn’t comment on the legislative language. “It’s true that Meta House is embarking on an expansion plan” to serve more women who are pregnant or who have given birth, she said. “We recognize the need is great and are committed to being part of the solution.”

The new plan also directs DHS “to distribute at least 30% of the remaining funds” in the capital projects program “for projects in counties with fewer than 500,000 residents.”

With the total $5.75 million saved in programs eliminated or reduced, the finance committee plan expands one DHS item and then adds three others.

At the Republicans’ press conference, Grant County Sheriff Nate Dreckman said that as the operators of county jails, he and his counterparts across the state “have a very high percentage of inmates that come into the jails with some type of substance use disorder.” He said the grant program “is going to allow law enforcement to take steps to help those that come into our care.”

“There was a lack of clear working with stakeholders,” Born said. He charged that Evers and Attorney General Josh Kaul “continue to turn their back on law enforcement and do not want to work with these key people in public safety in our communities.”

He reiterated those criticisms later in the committee meeting. There, Rep. Evan Goyke (D-Milwaukee) pushed back.

“It’s factually inaccurate to say that the DHS didn’t engage with certain stakeholders,” Goyke said. He pointing out that DHS officials had reported meeting with 800 people in listening sessions since January.

“They talked to law enforcement throughout,” he added. “Maybe they didn’t talk to your sheriff or your police chief, but to make some assertion that our lead state agency on this issue somehow neglected to speak with or involve law enforcement — It’s just not true.”

As with the language added to the capital project item, the description of the new program doesn’t name an agency. At the Republican press conference, however, a Wisconsin Boys & Girls Club executive connected the provision to her own organization.

“Opioid abuse is not limited to the big cities,” said Karen DeSanto, executive director of the West-Central Wisconsin branch of the Boys & Girls Club. “It’s a rural problem that follows our interstates and affects every community across Wisconsin.”

DeSanto described the organization’s “SMART Moves” program. “At our clubs, substance abuse prevention is part of our core work,” she said. “We work together every week with local law enforcement.”

The program engages children ages 7 through 18 in discussion and role playing exercises where “they practice resilience and refusal skills” she explained.

“With the funding of SMART Moves by the Joint Finance Committee today, we can help to stop this problem across rural communities before it occurs,” DeSanto said.

GET THE MORNING HEADLINES DELIVERED TO YOUR INBOX

For India, Adaptation and Finance More Urgent Than Ever

No English Menu? No Problem With This Easy Travel Hack