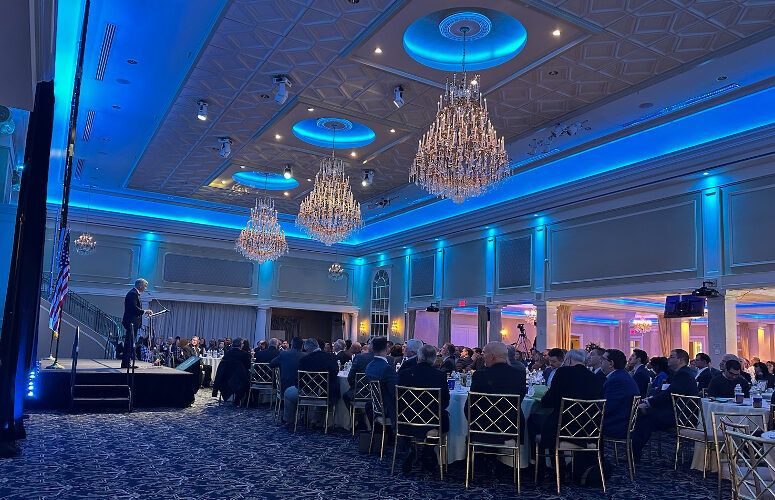 Just how bad could the economic climate get over the next several months? At NJBankers annual Economic Leadership Forum, held last Friday at the Palace at Somerset Park, a number of industry leaders, experts and economists did their best to determine what the economy may look like in the face of high inflation, supply chain issues, and the current labor market.

“You really can’t understand where our economy is, or where it’s going, without considering where we’ve come from,” said Patrick T. Harker, president and CEO, Federal Reserve Bank of Philadelphia.

“During the early part of the pandemic, the national economy suffered its largest contraction in recorded history, and tens of millions of Americans were thrown into joblessness in one of the sharpest recessions in American history,” Harker said. “That downturn was followed by a period of extraordinary economic growth as states loosened restrictions and vaccines were developed and deployed, but even as the economy came roaring back to health, scars were visible.

“Many older Americans had opted to retire at the onset of the pandemic, leaving labor force participation below where it was before COVID-19,” Harker continued. “Supply chains were badly damaged by the virus itself as workers fell ill, and by government lockdowns. And, large doses of fiscal spending from the federal government and accommodative monetary policy from the Federal Reserve stoked demand. This led to a phenomenon known colloquially as ‘too much money chasing too few goods’ and the highest inflation in four decades.”

This led to the Federal Reserve’s first rate hike to combat inflation in March 2020.

“Last year, we raised the target for the federal funds rate to between 4.25 % and 4.5%. That was a significant move, and a very fast one, given that we started the year at about 0%,” Harker said. “I expect that we will raise rates a few more times this year, though the days of us raising them 75 basis points at a time have surely passed. In my view, hikes of 25 basis points will be appropriate going forward.”

According to data from the Department of Labor (DOL), even with the rapid rate hikes, inflation has only modestly slowed, while prices are still accelerating. Overall inflation has fallen 2 percentage points in five months, but housing and services costs are still climbing, according to the DOL’s consumer price index (CPI).

However, despite uneasy feelings about the future, as it stands today, the economy actually remains in a relatively healthy position.

“What’s encouraging is that even as we are raising rates, and seeing some signs that inflation is cooling, the national economy remains relatively healthy overall,” Harker said. “In parts of 2022, the economy grew modestly even as we were tightening monetary policy substantially. Although inflation is biting, many Americans are still spending — even if they dip into their savings to do so.”

“Economists have been talking about a recession for a year now and it never seems to show up,” added Ethan Harris, head of global economics research, Bank of America Securities.

He said there are two things that have given the economy its resilience, the first of which is the money that was injected into the economy during the pandemic, which was the biggest fiscal stimulus in history.

“We estimate that there is about $2 trillion in excess savings that piled up over the course of the shutdown phase [of the pandemic]. Now what is happening is people are drawing that money down, which is keeping the consumer looking pretty solid in the face of a lot of negative factors,” Harris said.

The second factor contributing to some level of economic resilience is what Harris described as the “insane” labor market.

He said that the massive surge in demand for workers combined with the fading supply of workers due to early retirement and lifestyle changes creating a weaker labor supply is something that he doesn’t see changing.

Last year, the U.S. economy created 4.5 million jobs, and Harker added that while we are seeing scattered layoffs in certain segments like tech, there is little evidence of a major downturn in the job market. In fact, a record number of Americans are employed, and the national unemployment rate sits at a low 3.5%.

“GDP growth will be modest, but I’m not forecasting a recession,” Harker said. “The labor markets are simply too hot to indicate a significant downturn at this point. I expect real GDP growth of about 1% this year before climbing back up to trend growth of about 2% in 2024 and 2025. It’s an underrated advantage that the Federal Reserve is taking on inflation from a position of such labor market strength.”

He stated that factors such as the strong bull market in equities in the face of an uncertain economy, the fastest home price appreciation in modern history, and the overheated labor market, all led to, “too big of a party.”

“It has been a very big party and we need a correction. It’s not completely benign getting from here to there,” Harris said.