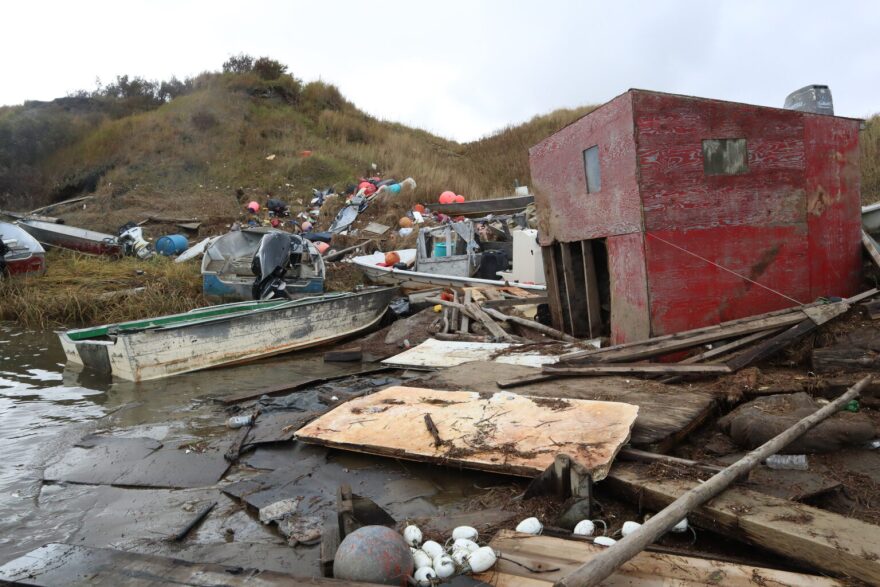 
The historic storm that slammed into Alaska’s west coast last weekend was a dramatic blow to food security in Chevak, where people are reeling after the storm destroyed boats, gear and many of the tools they use to hunt and fish for their main sources of food.

“I was hoping to go moose hunting but unfortunately this storm hit us here, so I can’t use my boat and motor,” said Derek Knight. He was at the Chevak community building this week to report his losses to the local tribe, which plans to seek disaster relief funds from the state and federal government.

The storm hit at the tail end of the fishing season and just as the berry-picking season was ending. It’s also the middle of the moose-hunting season.

“It’s just devastating,” said an emotional Knight. “It’s hard, but we have to deal with it, but there’s a lot of heartbreak.”

Losing this summer’s fish is already painful, but with their boats lost locals are unable to replace that with moose or seals they would hunt in the fall. Knight and others say nearly 90 percent of the 100 or so boats people use to gather food were damaged or completely destroyed by the storm.

It’s not just boats and motors that are now gone. Video on social media during the storm shows small, square plywood shacks floating away. Those sheds held all kinds of equipment: life jackets, gas cans, fishing nets, camping gear — all the tools required for subsistence. The community stands on a tall bluff along the Chevak River, 17 miles from the Bering Sea coast. The storm surge brought so much water inland that for a few hours, it was as if Chevak were right at the coast.

Many of the damaged boats lying along the riverbank now look like dented soda cans. They’re tangled up in fishing nets. There are pieces of lumber and broken sheets of plywood all over the place. There are bottles, soda cans, round orange fishing floats and overturned gas cans everywhere, and there’s a strong smell of gasoline and oil.

On Wednesday, Leemon Joe had the cowling off his boat motor. As a light evening rain fall, he wiped mud and debris from inside the boat motor motor with an old towel.

Joe said the motor was completely submerged in the river for three days.

“My friend’s coming down to help me out, see if I can get it running again,” he added.

The boat was still parked at the riverbank on Friday.

The storm surge also knocked out power to part of the village as well. Ryan Bukowski lives on the west side of town and has three giant freezers at his home, which was without power for three days.

“Yeah, everything thawed out and refroze here,” Bukowski said.

Bukowski’s freezers are filled with fish, moose and seal meat, all of the berries his family gathered this summer and a lot of store-bought supplementary food — much of it now spoiled. He’s responsible for feeding at least nine family members, but now he’s not sure if any of this food is safe to eat.

Just under 1,000 people live in Chevak, roughly 136 miles west of Bethel. The food security threat is both short and long-term. People have lost not only the food they’ve already gathered, but also their means to replace it.

Bukowksi said losing the contents of a freezer is like finally showing up at a store, only to find the shelves are empty.

Trends in hospitality – Focus on the future of the food industry

Holistic strategy needed to give Malta back quality, charm it once had – Chamber of...