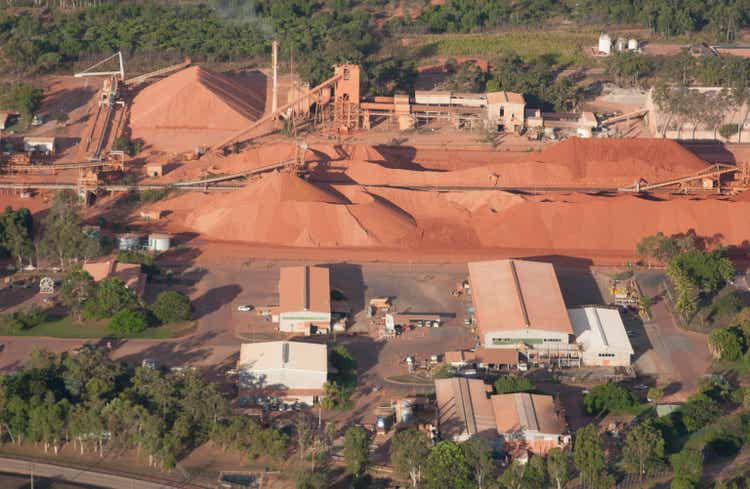 To make alumina, you need the raw material bauxite. This is something China has. They have 14 bauxite mines in China. These produced 16 million tons in 2021. In addition, another 12.3 million tons came from their 85% owned mine in Guinea, West Africa.

As a shareholder in Rio Tinto (RIO), I was surprised to learn that one of their largest shareholders was the Aluminum Corporation of China.

Now that we have established that they are, indeed, a large company within their industry, we want to see if they could be a good investment too.

There are wise people in the U.S., such as the founder of DoubleLine, Jeffrey Gundlach that came out earlier this year and said that he thought China was “un-investable”. I disagree with such broad-based biases, and this article will not dwell on whether or not it is investable.

China will continue to grow and money is made there. What matters most to me is if the company I invest in is able to produce a satisfactory return on its equity, is conservatively leveraged, and has good corporate governance.

Let us start by looking at their numbers and also compare some of them up against North America’s largest aluminum producer Alcoa (AA) and Europe’s largest manufacturer Norsk Hydro (OTCQX:NHYDY).

ACH delivered a net profit for the FH of 2022 of RMB 3.99 billion, which was an improvement of 28.9% compared to the net profit for the same period last year. This translates to an EPS of RMB 0.231. From this, they did not declare any interim dividend. A full interim report from ACH will only come out later in September.

Therefore, we shall look more closely at numbers from their 2021 Annual Report.

The net profit for the year attributable to the shareholders was RMB 5.3 billion or USD 832 million. Seeking Alpha has an ROE of 9.81%, which is somewhat lower than the 13.87% for sector median return.

However, when we compare their ROE with that of Alcoa and Norsk Hydro we can see that ACH’s return falls short. Alcoa had a fantastic ROE of 33.4% in 2021 and Norsk Hydro delivered an ROE of 18.6%.

At least, ACH’s free cash flow per share is improving.

ACH’s yearly Capex was stable in 2021 at RMB4.7 billion being just RMB 100 million higher than that of 2020. They were still much lower than the yearly Capex in 2019 which was RMB 11.8 million. The estimated Capex for this year is about RMB 6.8 billion.

Now, let us look at their debt level. Here is their balance sheet from their 2021 Annual Report:

And their equity and liabilities.

As of December 31, 2021, ACH had approximately RMB 24.5 billion in outstanding short-term bonds and short-term bank borrowings, including the current portion of the long-term bank and other borrowings.

Their outstanding long- and medium-term bonds and long-term bank and other borrowings (excluding the current portion of these borrowings was RMB 64.10 billion.

Their net debt/EBITDA is quite manageable with a ratio of 3.7.

How does that stack up against Alcoa and Hydro?

Since we have just looked at the free cash flow per share, which is a good yardstick for how much a company safely can distribute in dividends, let us look at how generous ACH has been in the past.

If you are looking for a company that has a reliable and growing dividend, ACH will unfortunately not be a good pick.

More importantly, they had not paid any dividend since the Great Financial Crises of 2008, with the exception of a final dividend of just RMB 0.0114 per share back in 2011.

Therefore, in terms of dividend security, I am afraid I have to give them an F grade.

The most generous of them all is, in fact, Norsk Hydro which paid out a dividend of NOK 5.40 which implied a high yield of 8.4% based on its share price at the end of 2021.

China is by far the world’s largest manufacturer of primary aluminum, being six times larger than the number two on the list, namely the Middle East.

The bauxite mine which they own 85% of, located in Guinea, West Africa started shipping out the raw material to China in April of 2020. They expect to ship about 15 million tons from this year onwards.

Prospects for positive development for ACH in particular, and the industry as a whole, are quite murky at the moment as the global economy is seeing reduced consumer confidence going forward.

Risks to the ACH thesis

You need a lot of energy, mostly in the form of electricity to convert the alumina powder, which is made from bauxite and is the intermediary product, into usable aluminum.

You need 17 MWh to produce 1 ton of primary aluminum.

That is why you often find aluminum smelters located in countries with an abundance of a cheap supply of electricity.

Unless you have lived under a rock, you must have noticed that the price of electricity has skyrocketed lately. Over the weekend preceding Monday 5th September, Gazprom in Russia made up some reason not to turn on the supply of gas to Europe through the Nord-Steam pipeline. Therefore, the gas price spiked by 30% to 270 Euro/MWh which apparently equates to a crude oil price of USD 450 per barrel.

Producers secure long-term contracts and often have their own power generation, but they are still not immune to the higher price levels of energy.

As explained, alumina and aluminum producers are consuming large amounts of electricity. ACH generally meets its electricity consumption requirements from a combination of internal and external sources. They do use mostly coal to generate their electricity and have invested heavily in coal mining operations.

The risk is that it remains to be seen if they will be able to pass on higher costs of electricity to their customers.

Another risk to the thesis is what will happen in terms of trade barriers and higher import duties for Chinese companies from some of the countries they export to. We are living in a more and more fragmented world where previous co-operations are turning less beneficial to China, it seems.

Although Aluminum Corporation of China is one of the largest manufacturers of aluminum, its share price has come down 50% this year.

However, they are certainly not the most profitable.

Their earnings per share trend are improving, but they seem unable to deliver the same kind of return as their competitors in the West.

In addition to this, economic headwinds and great uncertainties as to whether manufacturers will be able to pass on added costs make it unpalatable for me to invest in the company at this moment.

As such, my stance is a Hold at this moment in time.

3 reasons the stock market could crash in October

2 battered UK shares that could explode when the stock market recovers!

Tesla Has Stock Traders Getting It All Wrong

Painful signs emerge that Fed is moving too far, too fast with aggressive rate increases

Corpus Christi got its first television station in 1954