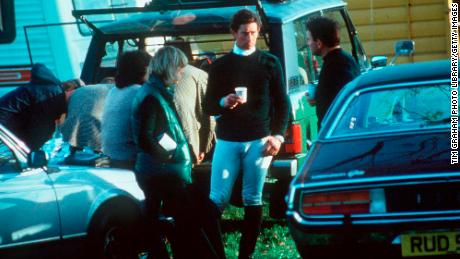 Since she and Charles married in 2005, Camilla has worked hard as a senior royal, standing by Charles’ side and championing charities helping women and children. But many people find it hard to forget, or forgive, their long-running affair and the pain it caused Diana.

Netflix drama “The Crown” has brought that turbulent period into focus in recent seasons, introducing some viewers to Camilla and reminding others of her past.

So, what can we expect from Britain’s new Queen Consort?

Born Camilla Shand in July 1947, she was brought up in the English countryside, where she developed a passion for horses.

She reportedly met Prince Charles at a polo match in Windsor in 1970 and they became friends. The following year Charles joined the Royal Navy and, while he was away, Camilla married cavalry officer Andrew Parker Bowles. The couple had two children during the 1970s.

Charles married Lady Diana Spencer in 1981 in an apparently fairytale ceremony watched by millions around the world. But he admitted in 1994 that he had been having an extramarital affair with Camilla.

Diana confirmed his infidelity and her own the following year during a bombshell interview with the BBC when she famously said, “there were three of us in this marriage, so it was a bit crowded.”

Camilla divorced from Andrew Parker Bowles in 1995. Charles and Diana divorced the following year and Camilla all but vanished from public life as public and media support swung behind the princess. The pro-Diana, anti-Camilla sentiment was compounded by the outpouring of sympathy for Diana after she was killed in a high-speed car crash in Paris in 1997.

In 1999, Clarence House embarked on a program to reintroduce Camilla to the public with a carefully orchestrated first appearance with Charles outside the Ritz Hotel in London. She moved into Clarence House to be with Charles and her name started appearing on official paperwork.

Six years later, their decades-long love story reached its climax when they were wed in Windsor, with the Queen’s consent. Camilla, now known as Her Royal Highness the Duchess of Cornwall, was confirmed as Charles’ official consort and future queen of the United Kingdom.

The duchess threw herself into life as a senior royal, supporting Charles on official engagements in the UK and on overseas tours, despite her deep fear of flying. She quickly became an asset for the royal family and British government with her common touch and ability to dissipate the tension in a room.

“It’s always nice to have somebody on your side,” Prince Charles told CNN in 2015. “She’s an enormous support. The great thing is we laugh a lot because she sees the funny side of life, thank God. If you imagine, that adds an enormous amount to the whole thing.”

Camilla also defined her own royal role, championing causes close to her heart such as children’s literacy and supporting victims of domestic violence. She told CNN during a visit to a women’s shelter in Bristol, England, in 2017 that she was able to use her position to highlight the plight of the “brave women” who had suffered at the hands of her partners. “Seeing is believing, hearing is believing,” she said.

The duchess has also worked to raise awareness around osteoporosis, a disease that affected both her mother and grandmother. “She feels deeply about that,” Prince Charles told CNN in 2015.

He added: “She’s done wonderful things I think with the whole issue around violence against women and rape and sexual violence. I think it’s been quite remarkable with what she’s done on that front. And then again with all her work on literacy because she’s mad on reading and her father was a great reader and I think encouraged her in that way, so she devours books of all kinds.”

“I’m very proud of her and in between all that she tries to support me, which is wonderful of her,” Charles said.

As Camilla’s family grew, a new passion developed — for grandchildren. “She’s a professional grandmother,” one of her aides told CNN in 2013.

The moment her husband became king, Camilla automatically became queen. However, it had long been thought that she wouldn’t use the title, Clarence House having issued a statement in 2005 saying that she would instead be known as “Princess Consort.” Some in the palace at the time felt the public wasn’t ready for Camilla to take a title that had been destined for Diana.

But over the years, attitudes towards Camilla have softened. In 2015, a CNN poll found that one in four Britons had grown to like her more and fewer people opposed her becoming known as queen.

Then, in February 2022, the Queen used the landmark milestone of her Platinum Jubilee to give her blessing for the Duchess of Cornwall to be known as queen when the time came.

In a message celebrating the 70th anniversary of her accession to the British throne, she said: “When, in the fullness of time, my son Charles becomes King, I know you will give him and his wife Camilla the same support that you have given me; and it is my sincere wish that, when that time comes, Camilla will be known as Queen Consort as she continues her own loyal service.”

In response, a spokesperson for Charles and Camilla said they were “touched and honoured by Her Majesty’s words.”

It was a hugely significant intervention from the monarch, the only person who can define royal titles.

Elizabeth’s move to future-proof the monarchy emphasized that Camilla was no longer viewed — either publicly or within palace walls — as the royal mistress, but rather as a central figure at the very heart of “the firm.”

Southwest Airlines promotion makes it easier to get a Companion Pass