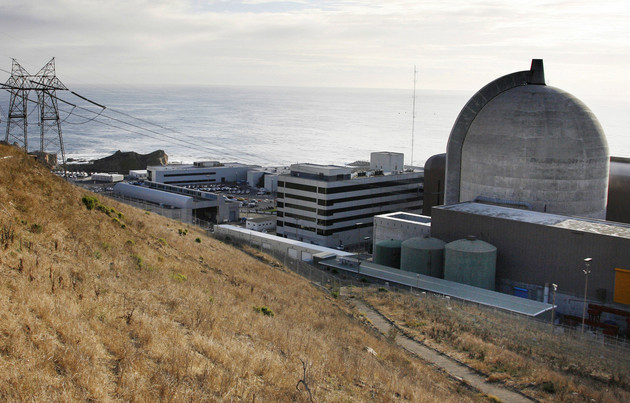 
The reality, however, is a lot messier.

California’s recent decisions to postpone the closure of its last nuclear plant and to extend the life of some natural gas-fired facilities highlight what officials and experts say is the fact that the state with the most ambitious energy goals is far from achieving them.

Growing demand for electricity and the fickle nature, for now, of greener technologies such as wind and solar are making it hard to progress toward the state-mandated goal of a grid that’s 100 percent emissions-free by 2045. Renewables provided 36 percent of the state’s power supply on average so far this year.

Those constraints were behind the recent decision by the Legislature, at Newsom’s urging, to postpone the retirement of the Diablo Canyon nuclear plant despite the fact that activists thought they’d secured its closure — and the governor himself once supported the idea.

The 10 days of triple-digit temperatures across the state this month sent power demand surging to a record level, bringing state regulators close to ordering rolling blackouts, a potentially deadly move and a political disaster.

It was the realization of a nightmare scenario a top state energy official said he’s been considering for months.

“Oh, my lord, we are in a very bad situation compared to even the worst case that we anticipated,” Siva Gunda, vice chair of the California Energy Commission, said he recalls thinking in the spring, when supply chain delays and a tariff on solar imports — compounded by severe drought — started to look like a multi-year power crisis.

The possibility of rolling blackouts became a shadow looming over California Democrats, even those who felt uneasy about keeping Diablo Canyon open. Some talked publicly about how outages contributed to the impeachment of then-Gov. Gray Davis at the beginning of the century.

What’s needed now, officials say, is even more investment by the state akin to the Marshall Plan that rebuilt Europe after World War II.

“Enough isn’t being done right now” to avoid a worrying gap in the power supply in the future, said state Sen. John Laird, a Democrat from Santa Cruz who has argued the state needs massive new investment in renewable energy and batteries to move off fossil fuels.

“We have to make sure that we have more wind, we have more solar, we really develop offshore wind, get out of the way of some of the developed renewables so that they come on the grid,” Laird said.

The stakes are existential. After the Enron electricity trading scandal and the Western energy crisis that followed 20 years ago, the state’s reputation was in tatters and a governor got recalled. But California quickly built itself up as a model for embracing wind and solar power — becoming the measure against which other states compare their own climate ambitions.

Now, by a state estimate, California will need to deploy renewable energy at five times its average pace to meet its mandated goal of 100 percent emissions-free power by 2045. All that while contending with rising temperatures, drought and wildfire.

That uncomfortable reality gave Laird some sleepless nights, he recalled in an interview. He is close friends with people who fought for decades to shut the nuclear plant, worried there might be an accident along the seismically active Central Coast, among other concerns.

He eventually voted to keep Diablo Canyon open, a difficult decision he said was driven by projections that California would not have enough new wind and solar power in time to make up for its closure. The last-minute scramble by Newsom and the Legislature could postpone the plant’s demise until 2030, reversing a deal made six years ago between green groups, labor and regulators to close it in 2025. The nuclear plant provides up to ten percent of the state’s power.

Laird sees the delay, which requires federal approval, as a stopgap measure that shouldn’t get in the way of a massive build-up of renewable energy.

The state senator’s district is a microcosm of California’s energy transition. Criss-crossed by high-voltage transmission lines, the region not only includes the heavily fortified Diablo Canyon, nestled out of sight among rolling green hills along the ocean, but also the first proposed offshore wind farm on the West Coast. Projects like this are meant to help the state get rid of all carbon emissions — if they can be built on time.

Workers along the Central Coast have a long history of building energy projects and see the state’s grid challenges as an opportunity, Dawn Ortiz-Legg, a San Luis Obispo County supervisor, said in an interview in Morro Bay, the sleepy fishing village slated to host the floating offshore wind turbines 20 miles off its shore. The county official previously helped turn homebuilders into workers who constructed large solar farms that helped lift the county out of recession.

Behind Ortiz-Legg rose three fog-shrouded, iconic smokestacks at a shuttered power plant that once burned coal and gas. Now, in an apt metaphor, they are scheduled to come down to make way for a proposed battery facility that would store renewable power.

Ortiz-Legg said she agreed with postponing the closure of the nuclear power plant — but only temporarily. Now, she’s calling for state leaders to act with more urgency to make sure Diablo Canyon can be closed, according to the new plan, in 2030.

“It’s really important to note that in 2001, 2002, when California had its energy crisis, gas plants were permitted in 20 days,” she said.

The tight timeline is making Jane Swanson skeptical. A nearby resident, she has fought the nuclear plant since the 1970s out of concerns about nuclear waste and seismic safety, as part of the organization Mothers for Peace. She was looking forward to Pacific Gas & Electric, which runs the plant, closing it down and now fears the future will bring more broken promises.

State energy regulators last year ordered utilities to add more clean energy to the grid over the next three years than ever before. But getting the solar panels and wind turbines built and plugged in depends largely on the whims of the global economy.

California energy officials went into crisis mode this spring when supply chain issues from the pandemic and a new retroactive tariff on solar panels cast a pall over the industry, delaying the renewable energy projects they had been counting on before Diablo Canyon was set to retire.

No one disputes that an additional margin of safety is needed, said Ralph Cavanagh, the energy co-director for the Natural Resources Defense Council. Still, he argued, the governor locked down on Diablo Canyon prematurely instead of looking at alternatives like bolstering energy efficiency and pulling more energy from other Western states.

“If the plant gets decommissioned, we don’t have enough juice to keep the lights on and keep air conditioners working and keep people’s EVs charged,” said Assemblymember Jordan Cunningham, the Republican who represents the Central Coast and thinks the plant should keep running even longer.

“I think in five years’ time, we’ll be in a better place, with renewables coupled with storage that we need to run a modern electricity grid, but we’re just not really quite there yet,” he said.

Rep. Salud Carbajal, a Democrat representing the area, has yet to take a position on the plant’s extension. But he urged Newsom to consider the local implications of keeping it open, including seismic safety.

Residents on the Central Coast had tussled for decades over the role of Diablo Canyon, but until recently, they thought the debate was over. Employees made retirement plans. Construction at the plant slowed as PG&E began preparing to shut the twin reactors down. Conservationists eyed the lands around the plant.

An extension would upset those plans.

In an interview, Carbajal said he’s also wondered whether it will get in the way of developing nearby offshore wind farms.

“I’m not one of those people that’s gonna say, ‘oh, you know, done and over,’” he said, referring to the debate over Diablo Canyon. “There’s a lot of moving parts.”

By 2045, state officials want offshore wind to produce 25 percent of California’s power, a more ambitious goal than any other state.

But even the most optimistic people acknowledge that those wind turbines won’t start producing power for the grid until at least 2029 — right before Diablo Canyon’s new closure date.