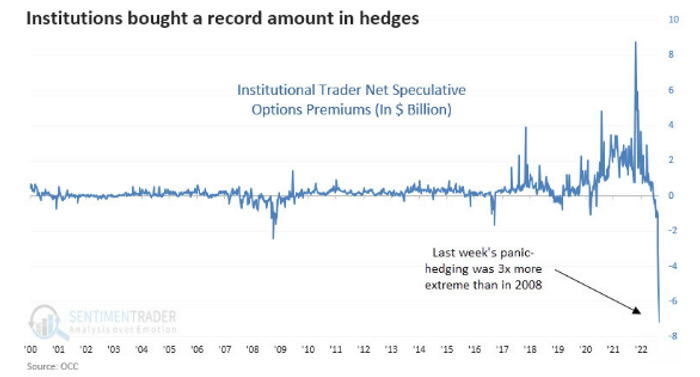 Chastened investors will be wary, however. It hasn’t benefited either bulls or bears of late to assume a march in either direction can be maintained for long without containing sharp reversals.

So how should traders — those with a short-term horizon — navigate across such choppy markets? The answer: look for extremes in momentum and positioning, then plan your contrarianism accordingly.

That’s the inference from Jason Goepfert, director of research at SentimenTrader, who provides a startling chart on positioning to illustrate. More on that in a minute.

First, let’s consider momentum. One of its most closely-watched measures is the 14-day relative strength index, where a move meaningfully above 70 is considered overbought territory and a slip below 30 is viewed as oversold.

Incidentally, any forex traders bemoaning being caught out by the Japanese yen’s
USDJPY
sharp rally off 24-year lows on Friday, might like to consider the risk they were taking in maintaining a yen short when the USD/JPY 14-day RSI by midweek was touching 88.

So, to positioning. SentimenTrader’s Goepfert describes the chart below as the most remarkable he’s seen in his career. It shows the net dollar value of premiums that institutional traders spent on buying calls to open minus buying puts to open. The lower the blue line, the more they spent on puts.

He explains that, last week, traders of fifty or more contracts bought to open nearly five million put options, spending $8.1 billion on those contracts, almost double the amount of any other week in 22 years.

There is a caveat: “With options trading, it’s essential to consider both sides. Sometimes, when there is a spike in put buying, it’s because overall volume is higher, and there is a coincident spike in call buying. So, we prefer to net them out, which is what the chart below shows,” says Goepfert.

Still, it suggests the largest traders in the options market are “buying protection against a crash at a pace unlike anything the market has ever seen…Whatever the explanations, the data is clear – institutional traders are in a mad scramble for protection,” he concludes.

There is more chatter expected on Friday from Fed officials before the central bank goes into blackout ahead of the two-day policy-setting meeting starting on September 20th. Chicago Fed president Charles Evans is due to speak at 10 a.m., Fed governor Chris Waller and Kansas City Fed president Esther George are due to talk, separately, at noon. All times Eastern.

The U.S. dollar index
DXY
was pulling back from its fresh 20-year highs after traders were reminded how riding the currency bandwagon with wild abandon can be a risky game. “Sudden moves in foreign exchange rates increase uncertainty for firms and are undesirable,” said Bank of Japan governor Haruhiko Kuroda on Friday. The prospect of BoJ intervention pushed the yen
USDJPY
sharply off 24-year lows and gave the pound
GBPUSD
and euro
EURUSD
a boost, too.

Citigroup
C
has won an appeal over the $500 million it mistakenly sent to hedge funds in relation to a Revlon loan.

Better news out of Europe where the benchmark natural gas measure, the ICE Dutch TTF future, slipped a further 5% to 208.9 euros per megawatt hour. Less than three weeks ago the price was about 350 euros pmh.

“Sell in May and go away and come back again on St Leger Day”. That’s the full U.K. quote for the old and contentious market saying. The 245th running of the St Leger horse race, the final classic of the British flat season, was due to take place on Saturday at its traditional home of Doncaster, South Yorkshire. Racing was suspended on Friday because of Queen Elizabeth II’s death, and at time of writing it was not clear if the St Leger would go ahead. New London, the bay colt owned by Sheikh Mohammed, was the favorite.

The Bank of England said on Friday it would postpone its rate setting meeting by a week to September 22, to allow for a period of mourning.

Best of the web

Can Japan feed itself.
The tragedy at Bed Bath & Beyond.
How Bitcoin bombed in El Salvador.

The IHS Markit’s PMI business surveys contain a backlog indicator, which it describes as capturing “the volume of orders that a company has received but has yet to either start work on or complete.” It’s a useful barometer of the extent to which companies are struggling to cope with demand and as such can “provide useful information about pricing power and developing inflation trends”.

As the chart below shows it tends to move in unison with the U.S. Treasury yields – though there was a dislocation due the pandemic shutdown. Callum Thomas, head of research at Topdown Charts, asks: “It took a while for bond yields to catch up to rising backlogs, but now the open question is how long will it take bond yields to catch back down to easing backlogs?”

Here were the most active stock-market tickers on MarketWatch as of 6 a.m. Eastern.

What happened to manners at work.

They liked the house so much they bought the town.

Need to Know starts early and is updated until the opening bell, but sign up here to get it delivered once to your email box. The emailed version will be sent out at about 7:30 a.m. Eastern.