Audio/Video Production wouldn’t necessarily be the first class one would expect to find Sidney Navarro. The 17-year-old senior at Memorial High School was born blind. But joining the A/V program at the Career and Technology Education Center was not about what she couldn’t do.

It was all about what she could do.

“Most of what I do is because I want to get to other people and educate them more on blindness and what it’s like to be blind,” she said. “I want people to be able to see that just because I’m blind doesn’t mean I’m not going to be able to do things.”

The Port Arthur native admitted she was nervous at first, particularly when she learned the class would involve a lot of writing.

“I was pretty bad at writing,” she said as her aide of six years, Pamela Dorsey, agreed. “Terrible at writing.”

But what she did have was an active imagination.

“As we started getting into more writing prompts every day, I realized I could let my imagination go,” the high school senior said. “When I can’t sleep, I used to tell myself bedtime stories, and I would tell my siblings bedtime stories.”

Now, she’s known for her writing, and her A/V class relies on it.

“Her ability to write is what attracted me to her initially when she came in,” said her instructor Kimberly Sanders. “Her presentation caught everyone’s attention. When she left, we all had chills. When she talked, you could just feel the happiness, the smile on her face, everything about her whole situation — it just touched us.”

Sanders’ class focuses on teaching students how to piece together various media, from commercials to news segments. And while they’re currently working to partner with Lamar State College Port Arthur to offer college credits, students leave the class licensed in various Adobe software. 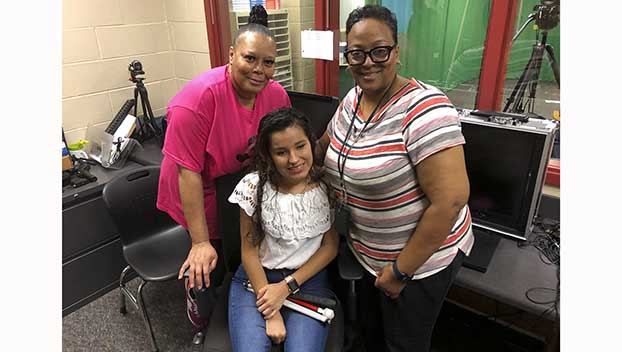 “So if my students are interested in working in that field in any capacity — whether they’re a business major, whether they’re a video major — they can immediately go to a college campus and seek employment with their media team and actually get paid for what they learned here because they leave licensed,” Sanders said.

Despite her former lack of writing, Navarro’s role centers around it.

“I do mostly script writing for interviews, or for when we have commercials,” she said. “If there’s a topic we want to do, I’m asked to write a script or a little story for the commercial, or write the questions out for the interviews.”

She does so by using a braille tablet.

“She has a gift,” Sanders said. “Her imagination is just way out there. To be able to tell a story — like we try to do stuff to change the mindset of the kids at the middle school campus. We use Sidney to write out these little stories that we’re going to act out and record. She’s capable of doing things that other students are not capable of doing. She is an awesome writer.”

Navarro doesn’t know why she has no vision.

“I’ve been to many doctors and specialists and they all say something different,” she said. “Everybody has a different diagnosis.”

Over time she’s developed the ability to see certain lights and shadows.

“It just happened,” she said. “I want to call it God. Honestly there’s no other explanation.”

After high school, the avid reader and singer hopes to attend the Criss Cole Rehabilitation Center in Austin.

“I can get more independence skills and stuff that I need as a blind person like how to cook, how to walk, orientation and mobility,” she said.

Then she hopes to attend college to major in psychology.

But regardless of where she goes, she uses her vision impairment as a way to inspire others.

“I saw this as a way of letting people know, ‘hey, I’m blind but look what I’m doing,’” she said. “And if I can do it, you can do it, too. But it’s not just that, it’s also wanting people to see a little more of my world and get to know me better as a blind person and get to know the disability a little better.”