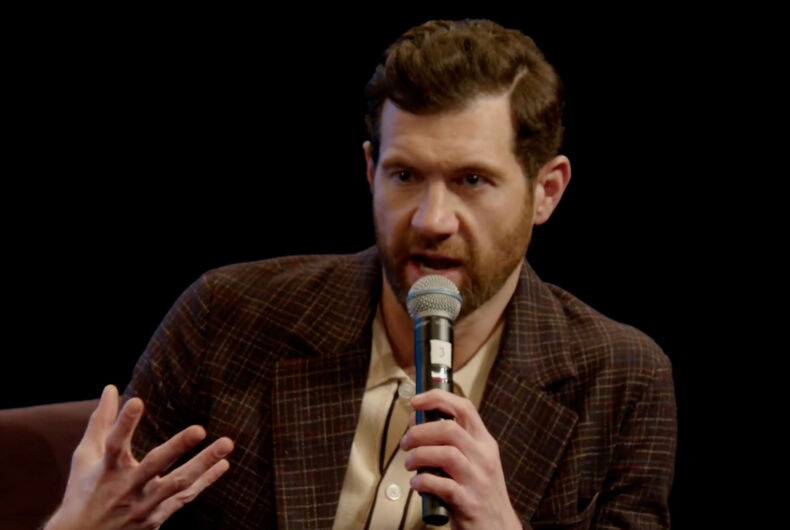 More than a week after its theatrical release, the post-mortem on Bros continues.

During a panel discussion at The New Yorker Festival on Friday evening, Bros co-writer and star Billy Eichner and Harvey Fierstein, who also appears in the film, debated the impact the gay rom-com’s marketing strategy had on its box office returns.

Ahead of its September 30 release, Bros was heavily touted as the first major studio-backed gay rom-com. In the wake of the film’s disappointing opening weekend, critics and industry watchers have speculated that the focus on the film’s historic nature and the public’s obligation to make it a box office success may have been counterproductive.

I liked bros, and it’s easier in hindsight to say what did and didn’t work. But like, what if the marketing was just: “hey im incredibly lucky, i worked hard and made this movie with my heart and i hope people see it and it makes them laugh…” https://t.co/SlgdfbVSSB

Fierstein seemed to echo that criticism, jokingly characterizing Universal Pictures’ marketing strategy as telling moviegoers to “get the f**k in the theater or I will call you names!”

“I felt that the whole idea of putting this movie out with this idea of, ‘The first ever gay movie! Starring a gay homo! And written by a big homo—but produced by heterosexuals!’ I mean, I said, ‘Is this a history lesson or a movie?’ I didn’t think it was really smart,” he said. “I think sometimes, you have to let the audience find you. Let them discover you, let them fall in love with you. Because the movie is too good.”

“It is just really human, and had the audience been allowed to find it on their own, I think they would have easier,” Fierstein continued.

Eichner, who has blamed his film’s box office failure on straight audiences not showing up to see it, pushed back on Fierstein’s read of the situation.

“There wasn’t much of a blueprint for this movie when it came to the marketing and all of that,” he said.

Universal, he continued, “could not have been more supportive about this movie, seriously, every step of the way. But it was a new type of movie for them, too. When Hollywood, major studios, take more than a century to release an R-rated gay rom-com and to do this wide of a release with a movie like this, there isn’t much of a blueprint to follow.”

Eichner explained that the studio felt the film’s historic nature might motivate audiences to see it. “Clearly, that tactic was not as effective, or not nearly as effective as we wanted it to be.”

Despite receiving generally glowing reviews, an A on Cinemascore, and a 89 percent fresh rating on Rotten Tomatoes, Bros fell well short of its projected $8 to $10 million box office, grossing just $4.8 million on opening weekend.

Still, Eichner said that the positive response to the movie is what matters.