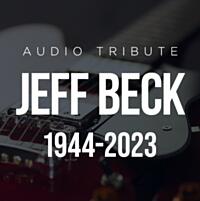 
Check out the BENZTOWN AUDIO TRIBUTE to JEFF BECK, known as one of the greatest guitarists of all time, who died TUESDAY (NET NEWS 1/11) at the age of 78 after contracting bacterial meningitis.

BECK’s long and creative history includes playing with the YARDBIRDS and he led the JEFF BECK GROUP, collected eight GRAMMY’s, and was inducted into the ROCK &ROLL HALL OF FAME both as a solo artist and as a member of the YARDBIRDS.

The BENZTOWN AUDIO TRIBUTE to JEFF BECK was written and produced by THOMAS GREEN and voiced by DARREN SILVA.

Listen to the audio tribute, here.