Neither team held larger than a six-point lead in the first half as Georgia Tech (10-9, 1-7 ACC) and Syracuse (13-6, 4-4 ACC) exchanged the advantage three times and worked through three ties. Trailing 28-22 with 3:21 left to play in the half, Morgan sparked a 9-2 Yellow Jacket run to close the opening 20 minutes and give Georgia Tech a 31-30 lead at halftime.

Syracuse came out of intermission regaining a six-point lead, 40-34, by the 5:16 mark, but Tech had an answer. Fueled by seven points from Morgan and six from Kayla Blackshear, the Jackets put together a 17-7 run over the next six minutes to take a 51-47 lead at 9:15 in the fourth. The Orange knotted the score for the ninth time before Swartz drew a foul on a three-point attempt and converted all three at the charity stripe to spark an 18-6 run over the final six minutes and 23 seconds. Tech saw offensive contributions from four different Jackets in the stretch, while holding Syracuse to a mere three field goals in the final minutes to secure the win.

Tech dominated the second half, winning the final 20 minutes, 38-27, shooting 48.1 percent (13-27) from the field and holding Syracuse to 25.0 percent (9-36). Bianca Jackson, who was held scoreless in the first half, scored 11 points in the second to help lift the Jackets to victory. 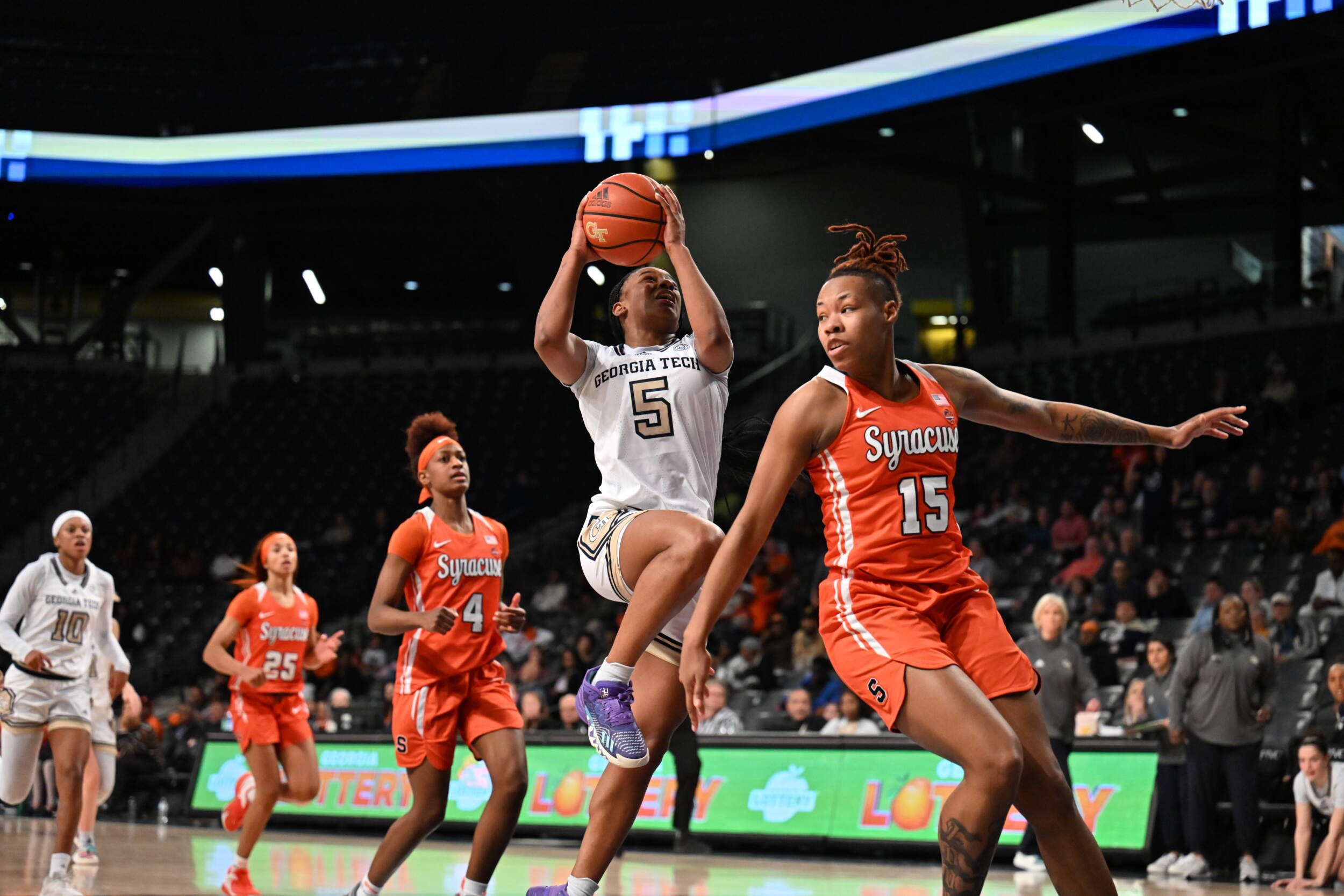 Tonie Morgan recorded her second double-double of the season with 16 points and a career-high 15 rebounds. Photo by Danny Karnik

Swartz led Tech with 17 points, followed by Morgan with 16, Jackson with 11 and Blackshear with 10 to mark the fourth time this season four Jackets finished in double-figures. Tech won rebounding battle, 40-37, thanks to a career-high 15 rebounds from Morgan. For the game, Tech shot 42.9 percent from the field and 76.0 percent from the charity stripe (19-25).

Syracuse was led offensively by Dyaisha Fair with 17 points, Teisha Hyman (15) and Dariauna Lewis (11 points and 14 rebounds). The Orange shot 34.3 percent from the field and 60.0 percent from the free throw line.

The win snapped a six-game skid for Georgia Tech and marked the first Atlantic Coast Conference win of the season.

The Yellow Jackets return to the hardwood at No. 17/20 North Carolina on Sunday, Jan. 22. Tip is slated for 4 p.m. on the ACC Network.