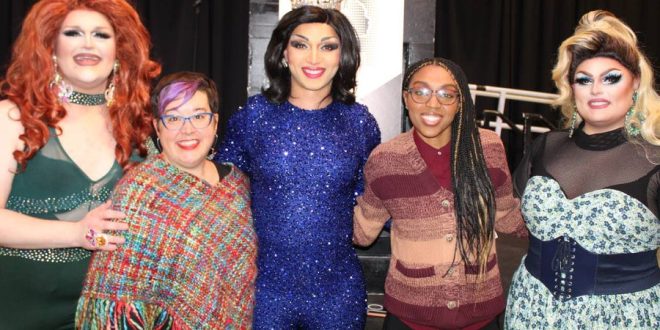 Columbia Mayor Barbara Buffaloe (second from left) poses with performers after the January 19, 2023 Columbia Values Diversity Celebration. Mayor Buffaloe tweeted after the event that “as hate crimes against drag show locations and performers are being committed in other communities, we want to reaffirm that Columbia is a community that supports all” (photo courtesy of Columbia Mayor Buffaloe’s Twitter page)

Missouri Attorney General Andrew Bailey is slamming Columbia Public Schools (CPS) and Columbia Mayor Barbara Buffaloe for Thursday’s Columbia Values Diversity breakfast, which featured a performance from three drag queens. General Bailey tells 939 the Eagle’s “Wake Up Mid-Missouri” that it’s “shameful and deplorable”, noting CPS children were in the audience. The attorney general suggests CPS and the city broke state law, adding that “all options” should be on the table. General Bailey also tells listeners that CPS Superintendent Dr. Brian Yearwood’s letter to Governor Parson is an admission of willful negligence, regarding the performance. Mayor Barbara Buffaloe defends the performance, tweeting that “drag is a cross-cultural art form with a long and rich history that is fun and encourages self-expression.” The mayor says that as hate crimes against drag show locations and performers are being committed elsewhere, she and others wanted to reaffirm that Columbia is a community that supports all.