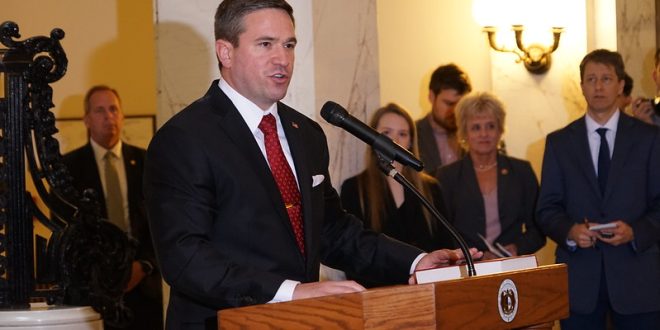 Andrew Bailey speaks to Capitol reporters and to others after being sworn-in as Missouri’s 44th attorney general on January 3, 2023 (photo courtesy of Governor Parson’s Flickr page)

State Rep. Kent Haden (R-Mexico), describes what happened to employees regarding health insurance premiums at the now-closed Fulton and Mexico hospitals as criminal. Haden, who chairs the Missouri House Healthcare Reform committee, tells 939 the Eagle that the hospitals allegedly took money out of employees’ pay for health care but did not actually pay insurance premiums. Haden says one employee has $50,000 in unpaid hospital bills for a child with spina bifida. Missouri Attorney General Andrew Bailey joined us live on 939 the Eagle’s “Wake Up Mid-Missouri” this morning, telling listeners that he’s limited in what he can say due to his office’s ongoing investigation. General Bailey says his office will not allow these employees to be taken advantage of, emphasizing that his office has broad authority to protect Missouri consumers: