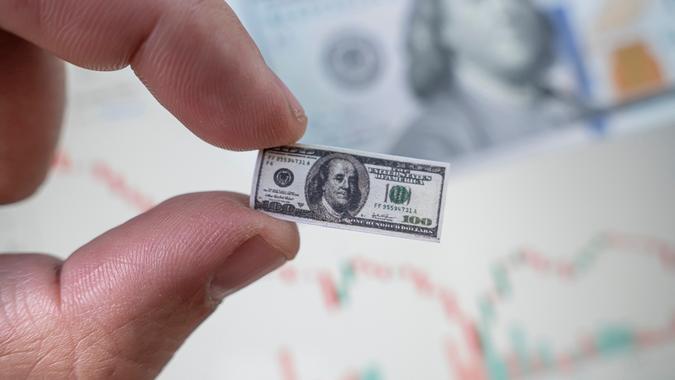 The real gross domestic product (GDP) decreased at an annual rate of 0.6% in the second quarter of 2022, according to the second — or revised — estimate released by the Bureau of Economic Analysis (BEA) on Aug. 25. The decrease was revised up 0.3 percentage point and is an improvement from the first quarter when real GDP decreased 1.6%.

See: Americans Are Split on Their View of the Economy — and It’s Affecting Their Finances
Find: Biden Cancels $10K Student Loans with Additional $10K for Pell Grant Borrowers

Bonus Offer: Open a new Citi Priority Account by 1/9/23 and earn up to a $2,000 cash bonus after completing required activities.

“The GDP estimate released today is based on more complete source data than were available for the “advance” estimate issued last month. In the advance estimate, the decrease in real GDP was 0.9%,” the BEA said in a press release. “The update primarily reflects upward revisions to consumer spending and private inventory investment that were partly offset by a downward revision to residential fixed investment.”

Despite the upward revision, the economy has been shrinking for two consecutive quarters, which would technically mean that the economy is in a recession. But whether we have entered a recession already or not depends on who you ask.

According to the National Bureau of Economic Research (NBER), whose economists are the ones declaring whether the country is in fact in a recession, such a phenomenon occurs when there is “a significant decline in economic activity that is spread across the economy and lasts more than a few months.” It adds, however, that “because a recession must influence the economy broadly and not be confined to one sector, the committee emphasizes economy-wide measures of economic activity.”

Rusty Vanneman, chief investment strategist at Orion Advisor Solutions, told GOBankingRates that “it was nice to see the second estimate of GDP continue to improve this morning with the latest number of -0.6% better than the initial estimate and the consensus outlook.”

“Nonetheless, it’s still not enough to change the current economic narrative,” Vanneman added. “Recession and inflation risks are still top concerns of many investors and most are still focused on what might be said in Jackson Hole this week at the economic symposium. Some are hoping that the Fed will pivot away from being aggressive in raising short-term interest rates, but it doesn’t seem likely at this point and today’s data won’t help that argument.”

In terms of future quarters, following President Joe Biden’s student loan forgiveness on August 24, Goldman Sachs says that the plan will have a small impact on economic growth and inflation.

See: Recession vs. Depression: What’s the Difference?
Inflation Reduction Act: Why Isn’t My Car On The Clean Vehicle Credit List?

“This modest reduction in debt payments as a share of income implies only a modest boost to GDP,” Goldman Sachs chief economist Jan Hatzius wrote in a note sent to GOBankingRates. “Relative to a counterfactual where debt forbearance ends and normal debt payments resume, our estimates imply a 0.1 percentage point boost to the level of GDP in 2023 with smaller effects in subsequent years due to the natural maturation of student loans, as well as continued growth in nominal GDP.”

Yaël Bizouati-Kennedy is a full-time financial journalist and has written for several publications, including Dow Jones, The Financial Times Group, Bloomberg and Business Insider. She also worked as a vice president/senior content writer for major NYC-based financial companies, including New York Life and MSCI. Yaël is now freelancing and most recently, she co-authored  the book “Blockchain for Medical Research: Accelerating Trust in Healthcare,” with Dr. Sean Manion. (CRC Press, April 2020) She holds two master’s degrees, including one in Journalism from New York University and one in Russian Studies from Université Toulouse-Jean Jaurès, France.